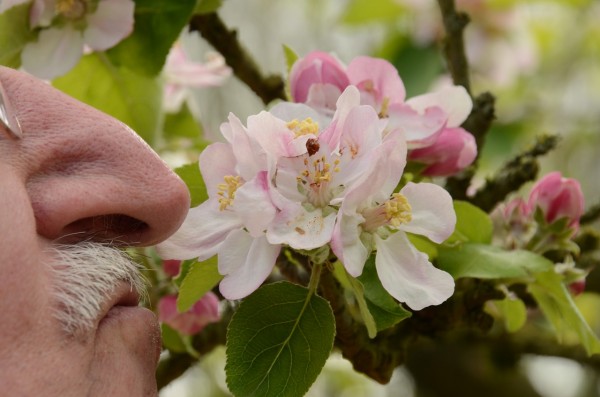 Seniors who can literally smell the roses, as well as other scents, might be at less risk of developing dementia, a new study suggests.

A team of researchers from the University of California – San Francisco (UCSF) conducted a study among almost 1800 seniors to investigate the link between sensory decline and risks of developing dementia. Published in the July 2020 volume of Alzheimer’s and Dementia: The Journal of the Alzheimer’s Association illustrates that worsening sensory functions are associated with accelerated cognitive aging.

“Sensory impairments could be due to underlying neurodegeneration or the same disease processes as those affecting cognition, such as stroke,” said Willa Brenowitz, one of the authors and a part of the UCSF Department of Psychiatry and Behavioral Sciences. Brenowitz is also a part of the Weill Institute for Neurosciences.

The Sense of Smell: A Stronger Sensory Indicator For Dementia

Previous research works regarding the cognitive condition and sensory capacities have centered on individual senses. The latest work from UCSF focuses on the cumulative effects of multiple sensory impairments. The latest studies indicate that these conditions are related to declining cognition.

The researchers have singled out olfaction, or the sense of smell, as a stronger indicator for dementia compared to the other senses, such as vision, touch, or hearing. Participants who experienced a 10 percent decline in the assessment had a 19 percent higher chance of developing the condition. This is higher than the 1 to 3 percent risks for corresponding declines in the other three senses.

“The olfactory bulb, which is critical for smell, is affected fairly early on in the course of the disease,” Brenowitz noted. She added that olfaction “may be a preclinical indicator of dementia,” adding that other sensors might have “more of a role in promoting” the disease.

Monitoring Seniors Over a Ten-Year Period

The UCSF team monitored 1794 adults aged 70 to 90 years old. All participants in the study were dementia-free at the time of enrollment. For ten years, participants were tracked in a Health, Aging, and Body Composition Study.

The participants’ multisensory points were scored from zero to 12 points, based on sample quartiles of objective measurements of smell, hearing, vision, and touch, then summed. Testing was done at the beginning of the study, being repeated every year.

Their study revealed that 328 participants, or 18 percent of their population, developed the advanced cognitive aging condition over the ten-year course of the study. In the study, it posited that the risk of acquiring dementia was more than two times higher in comparing “poor” to “good” multisensory score tertiles.

The risk was also close to 1.5 times higher in comparing the “middle” to “good” tertiles. It noted that every point that counted less in the participants’ multisensory function score translated to faster rates of cognitive decline.

From those who developed the cognitive condition, 104 of the 328 participants are from the “poor” range. This translates to 27 percent of the people in the range. It was followed by 141 people in the “middle” range (19 percent), and 83 people in the “good” range (12 percent).

Source: Elderly Who Retain Sense of Smell Are at Lower Risk of Dementia | Science Times