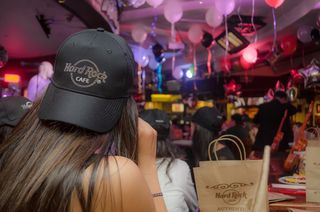 Eat to the Beat: How Music Impacts What You Order | Psychology Today

By msensory team02/09/2019No Comments
Source: Image by design571 from Pixabay

We joke that our eyes are bigger than our stomachs. Apparently, so are our ears. Research suggests that we might order more unhealthy food than we need, based on what we hear.

A series of studies by Dipayan Biswas et al. (2019) found that meal choices may be tied to the type of music that is playing.[i] They began by noting the increasing importance of “retail atmospherics” in creating a pleasant customer experience in terms of atmospheric elements such as background noise and ambient music. They recognize this as an important element of sales given the competition brick-and-mortar retailers face with online retailers.

But does ambiance impact customer choice? According to research, the answer is yes. Biswas et al. point out that their findings add to existing literature documenting what most of us know instinctively, that eating is often triggered by subconscious cues. They report that such cues include product claims, nutritional information, as well as how information is presented.

Other research has focused on the dining environment, showing a link between consumption and scent, ambient lighting, restaurant décor, and even factors such as the color of the check folder and the size of a plate.

One factor that is also important, and virtually omnipresent in some form or another in public establishments, is music.

The Link Between Volume, Stress, and Eating

They found that the impact of music volume on healthy and unhealthy food choices operated not only in settings where diners chose a single item, such as ordering a sandwich, but also when buying in bulk—such as selecting a basketful of items at a grocery store. How does it work? A mediating variable appears to be stress.

They note that increased levels of stress and excitement cause people to choose foods that are high in fat and energy, and promote unhealthy snack choices. They note that in general, someone who is upset or emotional is likely to prefer unhealthy food due to the breakdown of self-control and internal restraint.

Most people can relate to stress eating, often as a mild form of self-medication. Biswas et al. corroborate this experience, explaining that stress or excitement may cause people to make unhealthy food choices because foods that are fatty and sweet can decrease high excitement and stress levels. They recognize the truth behind the well-being induced by “comfort foods,” noting that research conducted on both people and animals suggests that such foods can ease levels of physiological stress. They also note that other research suggests that stressed individuals may attempt to counteract negative feelings by refocusing their attention on foods linked with positive feelings.

Whatever the pathway, loud music induced stress appears to promote unhealthy eating. This link presents a significant health issue because at least in America, apparently, the volume is rising.

If the Restaurant Pumps Up the Volume, Put Down the Fork

Recognizing the link between loud music and overindulgence emphasizes the need to exercise self-control. And apparently, restaurants are getting louder.

Biswas et al. recognize a documented trend toward louder music. They cite an example of a New York Times reporter who measured sound levels at a variety of stores and restaurants, finding that over 33% of the New York City establishments polled had sound levels that so high they triggered laws requiring employees to wear ear protection at work.

They note similar trends in fitness establishments, noting that the volume of music in gyms has become louder over time. (Interestingly, they note that Europe is experiencing the opposite trend, with a movement for retail establishments to reduce sound levels.)

In terms of takeaway, or perhaps more aptly “take out,” modern diners may want to recognize that whether ordering to go or dining in a restaurant, environment matters. Recognizing the often subconscious forces that determine what we “choose” to order is the first step to making healthier food choices.

If you are one of the increasing number of people seeking to use every advantage in making healthier meal choices, research like this may be music to your ears.

[i]Biswas, Dipayan, Kaisa Lund, and Courtney Szocs. “Sounds like a Healthy Retail Atmospheric Strategy: Effects of Ambient Music and Background Noise on Food Sales.” Journal of the Academy of Marketing Science 47, no. 1 (January 2019): 37–55.

Source: Eat to the Beat: How Music Impacts What You Order | Psychology Today

“Talent is an amalgam of high sensitivity; easy vulnerability; high sensory equipment (seeing, hearing, touching, smelling, tasting — intensely); a vivid imagination as well as a grip on reality; the desire to communicate one’s own experience and sensations, to make one’s self heard and seen.”