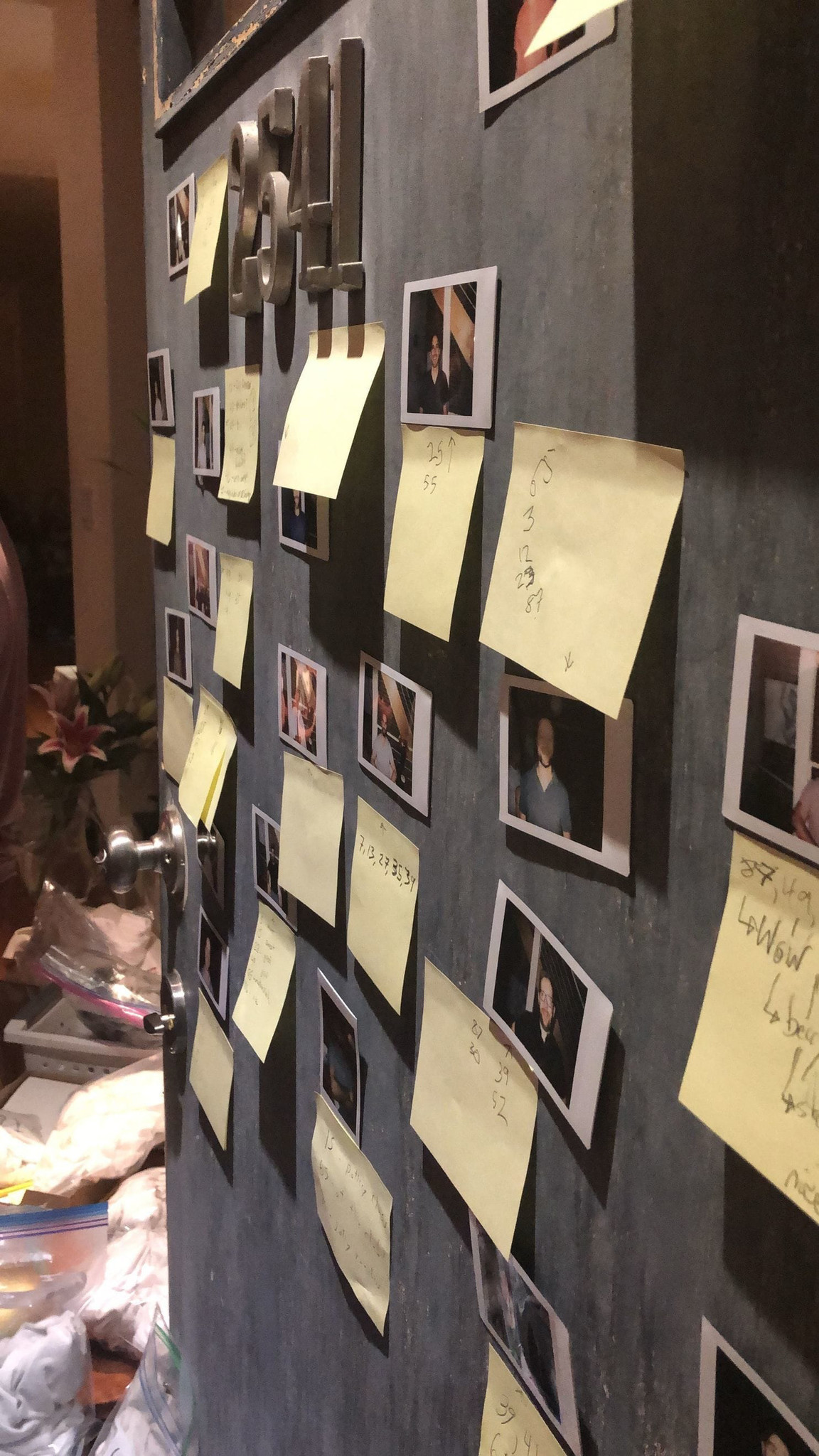 Does my sweaty T-shirt turn you on? At a pheromone party, singles try to match using only their noses | Chicago Tribune

As I walked into a party on a recent Thursday night, I was self-conscious in a way I’d never been before: What if no one likes the way I smell?

It’s summer in Washington, D.C., so no one smells all that great. But this night was different from your average gathering of sweaty bodies. I was about to enter a pheromone party, where strangers would be inhaling my scent via a T-shirt I’d been wearing.

It’s a fun if strange experiment. Singles are meeting in lots of odd ways these days. Perhaps sampling each other’s DNA the way you might go wine-tasting makes more sense than swiping through photos on a dating app.

“It’s a lovely experience to not visually judge someone – to smell someone before you see them,” said Amy Morse, who organized the pheromone party with Pakke, a new D.C. arts organization she co-founded.

Roughly 75 percent of women confess that smartphones are ruining their relationship.

arties have taken place in New York, London and Los Angeles and I’ve long wanted to attend one. As soon as I’d signed up, instructions arrived: I was to sleep in the same clean, white T-shirt for four nights to capture my pheromones. Then I’d bring my shirt to the party, sealed in a zip-top bag.

Pheromones are chemicals that mammals secrete from our cheeks, hands, neck, scalps, armpits and other more intimate spots. Scientists have studied whether, by sniffing someone’s sweaty T-shirt (and the pheromones contained therein), we might be able to detect a good genetic match. However, the science of pheromone-based attraction is far from certain. Additionally, hormonal birth control can disrupt a woman’s scent and ability to sniff out a partner.

I was late in starting the experiment, so I wore my shirt for two nights plus the day leading up to the party – meaning that I tainted my “odor print,” as it’s called, with hints of deodorant, office aroma and whatever is embedded in a bus seat. (I would later learn that most people had deviated from the instructions in varying ways. We’re humans, not lab rats.)

Once inside, I pulled a number out of a basket (No. 1!), labeled my zip-top bag accordingly and put it on a table with the other shirts. One of the event’s organizers took my Polaroid picture, which I placed on a wall next to a Post-it note where I would mark the numbers of the shirts whose scents I found pleasing.

Pheromones aside, the room’s odor print was overwhelming. One of the partygoers who’s a kombucha brewer was serving samples of a maca-cacao concoction in mini-mason jars. (Both ingredients are aphrodisiacs, he told me.) Another had a large group queuing up for her gin cocktail with Icelandic black lava salt on the glass’s rim and garnished with a sage leaf, which she would slap loudly to release its oils before placing it your drink. Oh, and give her the wrist of your drinking hand, so she can swab a line of lavender oil to reduce nervous tension and enhance blood circulation.

If you’ve lived in Washington long enough, any gathering of young professionals can feel like walking into your neighborhood bar. I ran into several people I know but have not sniffed up close: a guy friend I’ve known since our teens; a first date from years ago; a friend’s ex who’s wandering around with his shirt off (he spilled salsa on it, he says); and a guy who recognized me from the week prior when I was drinking alone after getting stood up for a first date. “I didn’t bring a T-shirt,” this last man says before reading his poetry to the crowd of 20- to 40-somethings, “but you can come smell me.”

That’s right, partygoers were also encouraged to inhale pheromones straight from the source. A projection screen lowered and Sadaf Lotfalian, a clinical psychologist in training, gave a lecture on the science of pheromones and instructed us to ask for consent before going up to someone and sniffing behind their ears.

Lotfalian told us she once broke up with someone because she didn’t like his scent. Later, she told me that this man “seemed perfect on paper,” and emotionally, they “connected very deeply.” But that smell … and it wasn’t a hygiene issue. “He’s very popular among the ladies, so I felt kind of isolated in how repelled I was,” she recalled. When she sampled the T-shirts, most of them smelled neutral to her, she said. The aromas she was drawn to sparked feelings of comfort and familiarity, while a few others “felt a little distant or unsafe.”

Lotfalian did meet one man whose aroma she inhaled directly. “Our connection was instant,” she said, and not based on scent alone. They ended up in a deep conversation about why Lotfalian sometimes shies away from love and her fears around it. They’ve seen each other three times since the party.

When I looked at my own sniffing notes from the T-shirts – cotton and cigarettes; chocolate; BO; lavender; summer camp; Doritos – I realized I paid more attention to what a shirt smelled like than how that aroma made me feel. Another partygoer wrote that his favorites smelled like “pottery class,” “at the club!” and “Jolly Ranchers.” Even so, other than the body odor, those smells often were hard to recognize and articulate. I realized that what we smell often takes a back seat to whatever we’re seeing or hearing, and the gathering was a bit of sensory overload. It is exhausting to be tuned in to all your senses concurrently. And also awakening.

Scents feel “so visceral and subconscious,” Morse said to me the day after the party. Smelling someone – by their ear or their face – is one of the first things she does when she’s getting close to a new romantic partner.

It’s “a different take on mating,” she said of the pheromone party. She’s over the bar scene and is trying to find new ways to meet people. “The way in which we choose mates right now is haphazard. Choosing someone based on whether they’re successful or tall? That seems ridiculous. Why is it more ridiculous based on the way they smell?”

Rather than seek out the men whose smells I liked (some were pleasing but none were incredibly intoxicating to me), I was more interested in finding the ones who’d marked down my number. I located one, tapped him on the shoulder and announced myself as No. 1.

Sniffing strangers’ shirts reminded him of being curled up with a lover in bed the next morning after a night spent together, once any artificial scents had faded. “That’s what these shirts reminded me of – that raw sense of a person,” he said.

Too bad he already had someone to share those intimate moments with: My most enthusiastic scent-mate has a girlfriend.

And does he like the way she smells?, I asked.

“Not really,” he replied. “Yesterday she had so much perfume on that I sneezed when she got in the car.”

I wonder if that night nudged him to suggest she sport her eau de naturale more often.

Source: Does my sweaty T-shirt turn you on? At a pheromone party, singles try to match using only their noses – Chicago Tribune