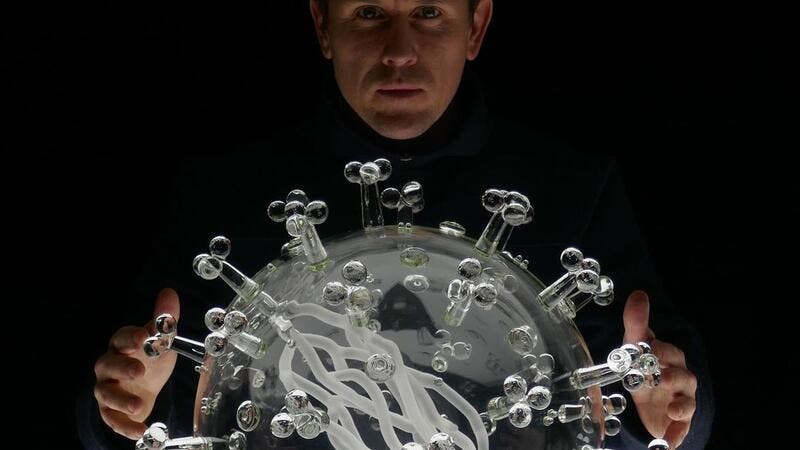 Discover The Surprising Relationship Between Art and Science | Al Bawaba

By msensory team11/05/2021No Comments
New giant glass sculpture of #sarscov2 #coronavirus #covid19 made and sold raising money (Instagram/lukejerramartist)
Traditionally, art and science have been treated as two separate disciplines, but when they are studied together it is clear to see the impact one has on the other.

Usually, there is a perception that science and art have nothing to do with each other. Meanwhile,the reality is completely different.

Traditionally, art and science have been treated as two separate disciplines, but when they are studied together it is clear to see the impact one has on the other.

Artists have long been inspired by the achievements of scientists in various fields. It also happens that a researcher has painting skills. But research has shown that artistic and scientific creativity are closely correlated, in terms of psychological profiles, polymath tendencies, and mental strategies. And many people who have pursued both art and science reported one discipline informing their work in the other. artsy.net

It is enough to look at the immortal work of Leonardo da Vinci ‘Vitruvian Man’ (or ‘Man Inscribed in a Circle and a Square’) which is an admiration for the human body and its proportions.

Today’s artists are inspired by physics, astronomy, mathematics, artificial intelligence, and chemistry. They present their views on these disciplines in the form of paintings, photographs, sculptures, buildings, or music. They often collaborate with scientists to deeply understand specific issues.

But while these artists engage with science mainly through collaboration, rare are those who have both studied science and worked as practicing artists. Below are some artists and their artistic interpretation of science:

According to Wikipedia, she is a conceptual artist whose work lies at the intersection of fragrance, cuisine, and science. She is known for installations that engage the senses, especially the sense of smell, and for her collaborations with biologists and chemists.

Using smell itself as a medium, she creates pungent olfactory experiences from microbial cultures, antidepressants, and live snails; works closely with biologists, chemists, and perfumes to create her unusual scents.

He is an artist creating sculptures, installations, and live arts projects. His giant glass sculpture of COVID-19 was created to honor the efforts of scientists, doctors, and nurses from around the world to fight the virus.

Edvard Munch painted the iconic composition “The Scream” in 1893 after writing in his diary that he was inspired by a roiling, blood-red sky he saw one night while walking with friends in Norway. The striking atmosphere and the fact that Munch said he was inspired by a real sunset has led to multiple theories about what caused the sky to look so tumultuous that fateful evening.

As he writes about himself on his official website julianvossandreae.com:

Julian Voss-Andreae is a German sculptor based in Portland Oregon. He is widely known for his striking large-scale public and private commissions often blending figurative sculpture with scientific insights into the nature of reality. Prior to his art career, Julian Voss-Andreae studied quantum physics and philosophy. His expertise in diverse fields of science and a deep passion for the mysteries of quantum physics has been a continual source of inspiration for his work;

‘Quantum man’ is an unusual sculpture that seems to be made of solid metal. However, it becomes completely invisible when viewed from the side.

Scientists themselves also draw heavily from contacts with artists. Capturing their scientific achievements and making them available to a wide audience can speed up their research.