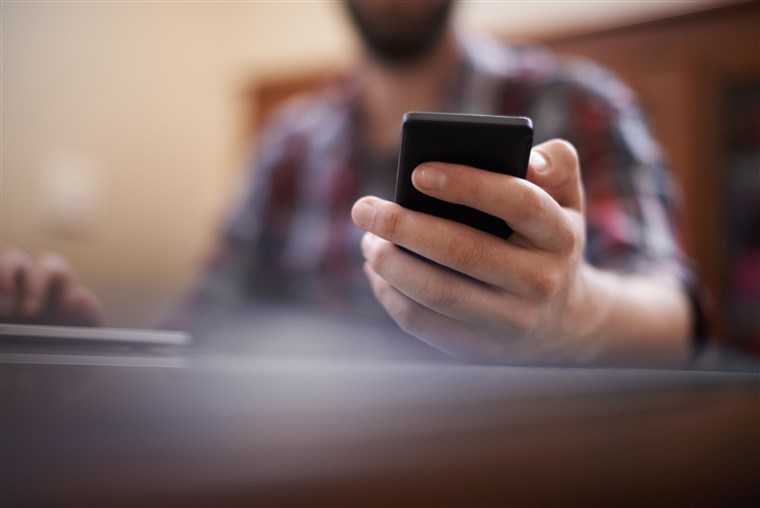 Researchers in Malaysia want to develop technology that would allow people to send scents as easily as they send emails and texts.PeopleImages / Getty Images

Having a video chat with a friend or colleague is all about seeing and hearing — at least for now. But experiments conducted recently in Malaysia suggest it may be possible to develop “electric smell” technology capable of conveying odors as well as sights and sounds.

The research is preliminary and not without its critics. But if electric smell pans out, long-distance conversations could one day be far more immersive — enabling you to share with a loved one the aroma of a meal you just prepared, for example, or letting you catch a whiff of the sea from your sister’s beach vacation.

“It’s not just about the smell,” said Adrian Cheok, one of the scientists behind the experiments. “It is part of a whole, integrated virtual reality or augmented reality. So, for example, you could have a virtual dinner with your friend through the internet. You can see them in 3D and also share a glass of wine together.”

In real life, odors are transmitted when airborne molecules waft into the nose, prompting specialized nerve cells in the upper airway to fire off impulses to the brain. In the recent experiments, performed on 31 test subjects at the Imagineering Institute in the Malaysian city of Nusajaya, researchers used electrodes in the nostrils to deliver weak electrical currents above and behind the nostrils, where these neurons are found.

The researchers were able to evoke 10 different virtual odors, including fruity, woody and minty.

The scientists couldn’t control which odors the subjects experienced, and they’re under no illusion that people will want to stick wires up their nostrils each time they have a video chat.

But Cheok, who is also the institute’s director as well as a professor at the City University of London, foresees a day when odors might be sensed by a sort of electronic nose (similar devices are now used in food-processing plants), sent in digital form over the internet and delivered to the recipient not via wires in the nose but via electrode-studded glasses or goggles.

“This stage was more exploratory,” Cheok said of the research. “The next stage is to produce it in a more controlled manner, and this will allow for people to develop software and products to generate electric smell.”

Cheok said it might take decades before the sorts of devices he envisions are ready to use. But he thinks devices that convey pre-programmed odors for entertainment applications — for example, to give moviegoers the generic scent of burnt rubber as they watch a car chase in an action movie — might be available sooner, perhaps within 15 years.

Electric smell technology could find applications beyond entertainment and personal communications. If it does prove feasible, it might be used to restore a sense of smell in people who have lost it as a result of illness, injury or inborn abnormality, said Joel Mainland, an olfactory neuroscientist at the Monell Chemical Senses Center in Philadelphia.

“I think there are medical implications for a certain class of people who have lost their sense of smell, but not everybody,” Mainland said.

Mainland added that it should be at least theoretically possible to evoke specific odors via electrical stimulation. He compared this approach to cochlear implants, which electrically stimulate the nerve that carries sound signals to the brain to restore limited hearing to deaf people. “It’s not a natural stimulation,” he said of cochlear implants. “It seems like it shouldn’t work.”

It’s possible a smell-restoring device could function in a similar manner, he said. “If you start playing something that is correlated to smells that are coming in, people’s brains will be able to decode what is going on.”

But Mainland is critical of the Malaysian study, saying it’s possible that the smells the subjects reported may not have been produced by electricity. “I can give you an empty jar to sniff when you don’t have anything up your nose, and sometimes you would report a faint odor,” he said in an email. “If you are asking someone if something smells, they have a strong bias to say yes even where there is no odor.”

The study failed to account for this possibility, he said.

Charles Spence, a professor of experimental psychology at the University of Oxford in England, agreed — and criticized the idea of electrical smell generally. He said the sense of smell is too complex and poorly understood for anyone to know how to stimulate it artificially.

“Any everyday smell will probably activate tens or hundreds of receptors,” he said in an email. “If you have only got one electrode in the nose, no matter what frequency rate or intensity (of electrical current you use) you are not going to be able to stimulate enough receptors to deliver a (perception).”

Adding to doubts is the long history of often poorly received attempts to add smell to movies, video games and even smartphones.

In 1959, movie theaters tried out and quickly abandoned AromaRama, a system that piped scents in through ceiling vents; in 1960, a similar system called Smell-O-Vision failed to catch on. In 2010, Time magazine named Smell-O-Vision one of the 50 worst inventions of all time.

More recently, a small coffee-mug-size device billed as a digital scent speaker was created to release scents on command from a smartphone app. But one reviewer called the device, Cyrano, a “glorified high-tech equivalent of an air freshener or candle.”

Likewise, the Feelreal mask, designed to release odor molecules from cartridges into the nose during virtual reality games, was panned as “an instrument of torture.”

But Cheok thinks these systems and devices share a key limitation: They rely on odor molecules, which hang around long after they are needed, resulting in muddled or unwanted odors.

What about previous research on stimulating electrical stimulation of odors? A study conducted in France in 1973 successfully elicited scents including vanilla, almonds and a burnt odor. But subsequent efforts to corroborate those findings, including one by Israeli researchers in 2016, failed.

One of Cheok’s collaborators on the experiments, Kasun Karunanayaka, a senior research fellow at the Imagineering Institute, said in an email that he was aware of the limitations of the new research.

“Hopefully, we can improve the results further,” he said. Future research, to be undertaken with a smell disorder specialist at Germany’s Technische Universität Dresden, will continue to test electrical stimulation of odors and use brain scans to compare how study subjects respond to actual and electrically stimulated odors.

“I really wouldn’t want to live in America. I found New York claustrophobic and dirty. I missed England when I was there, simple things like smells and the British sense of humor.”