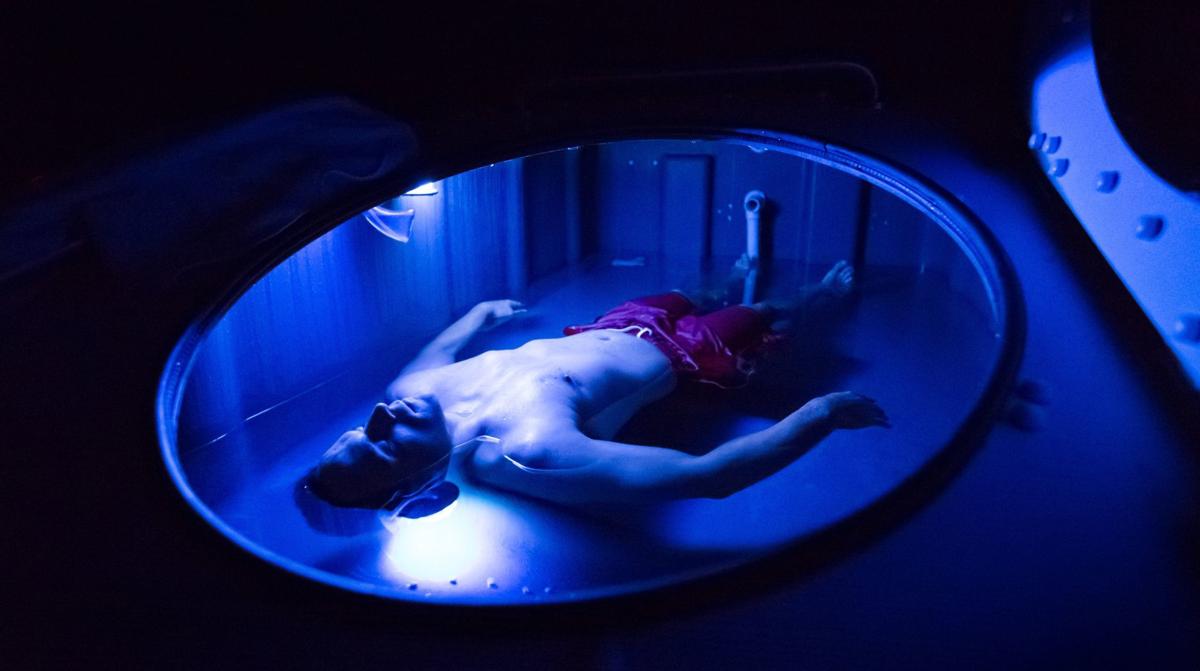 Deprivation of light, sound, gravity — the Internet, society, your pants — makes for a rejuvenating experience. | omaha.com

When you float naked in the wet dark for the first time (and I speak from experience), you don’t know what to do with yourself.

In the alien environment of the floating pod — a tank twice the size of the average bathtub — light, sound and (effectively) gravity are swapped out for hundreds of gallons of 94-degree water and 800-plus pounds of Epsom salts. You have no stimuli, no phone, no means to distract yourself from the terrifying prospect of doing nothing. No doing, just being.

Doing nothing is hard. It takes practice. (First-time floaters will wonder, “Am I doing nothing right?”)

But an hour later, when the lights come back on, you feel better. Something about the deprivation of light, sound, gravity — the Internet, society, your pants — makes for a rejuvenating experience. You go back out into the screeching hell-noise of the world with a clear head, one that lasts for at least a little while.

And, if you’re of a creative inclination, you might just have done nothing long enough to finally do something worthwhile.

You know the one, right?

More than 100 local artists walk into a sensory-deprivation tank?

More than 300 hours without sound, light, distraction. The punchline: Every artist comes out of the pod with fresh ideas for a new piece.

“When you’re in the float pod, it takes it all away,” said Jordan Concannon, owner of the Blue Oceans Float spa, near 75th and Pacific streets. “All the external stimuli, the distractions, just the randomness. And your mind can actually focus.

“Instead of your mind shutting down, it just goes into hyperdrive, surges with all these ideas. Creativity goes into places you may never have imagined. When you’re away from all the biases and stigmas and opinions that society places on us, then your mind can really create something that’s unique.”

Blue Oceans and four other local float shops recently invited more than 100 artists to take a dip in their floating pods. Each floating artist did three one-hour floating sessions, resulting in 111 pieces of artwork.

The work will be part of a new art book called “Inspirations of Water” and displayed this weekend at the north downtown gallery Hot Shops Art Center. The goal is to sell all the pieces, proceeds going to the artists and the Omaha Creative Institute.

In late 2016, my colleague Kelsey Stewart wrote about the trend of float spas moving into town:

“Floating dates back more than 40 years, though its popularity had waned by 2000, according to one expert. Now it’s making a comeback.”

“Proponents,” she wrote, “say floating reduces muscle and joint pain, shortens recovery time from athletic training or injuries, relieves stress and increases creativity. Studies back up some of those claims, though experts say more research needs to be done.”

To what extent the isolation spurs creativity is of course going to be different from person to person. But, going off this project, the pods seem to be a decent means for tapping into underserved corners of the subconscious.

Lucid visions may occur. Not hallucinations, exactly. More like your imagination firing up in the dark. In the sessions, one local artist became a whale swimming through space. Another met a big white polar bear who took him through ice caves in Alaska.

“But I didn’t have any vision in the pod,” said Jenna Johnson, a 24-year-old acrylic artist who participated in the project. “But I’m sure if I went in more and learned how to get deep into it, some would pop out.”

Johnson ended up painting a nude woman sitting cross-legged in the darkness, with color floating out of her mind.

For artist Erin Laney, the floats were therapeutic.

“I have chronic anxiety, so for me the floats were an outlet to just slow down,” said the 20-year-old artist and University of Nebraska at Omaha student. “I feel like I’m a lot less anxious after I’ve had this experience. I’m definitely going to be going back.

“Everyone has a different experience in the float pod. For me, it was very vivid. The colors were brighter. I had an innate sense of what I wanted to do with my art.”

Laney ended up painting a triptych of different aquatic animals that she felt connected to across her three floating sessions.

Artist Luke Armstrong, 37, said he found in the pod a peaceful and reflective space. He also found a peach.

The idea (vision?) he got in the pod became his art piece for the project.

Probably not an idea Armstrong’s brain would have had outside the pod. Sometimes you just need to be alone — truly alone — to enter such an peculiar state of mind, to the weirder corners of your creativity, to make something of yourself. To be the pit of a peach.

“Until you try it, it’s kind of hard to imagine how focused you can be in that space,” he said. “There’s nothing else in there but you.”