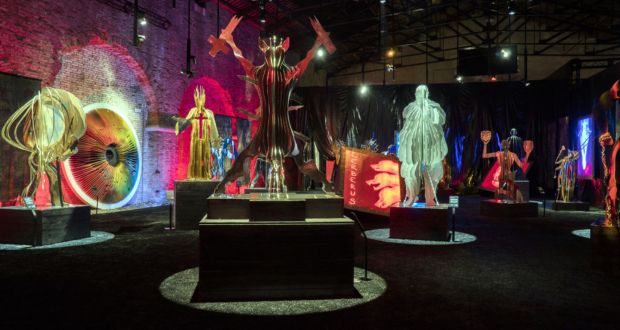 Could virtual reality be the future of art exhibitions? | Irish Times

Installation view of Vasily Klyukin: In Dante Veritas, presented by the State Russian Museum. Photograph courtesy of the artist

Since virtual reality was popularised in the video game industry, people all over the world have been experimenting with how far we can push its boundaries. As a result, VR is no longer merely a form for video games; it’s a space of its own that we can populate with ideas.

When Kosta Popov founded the Cappasity for Art initiative, that’s exactly what he had in mind. Popov, formerly the chief executive of a video-game production company, originally designed Cappasity to help businesses make digital presentations in augmented reality. However, after finding commercial success in this sphere, Popov decided to reappropriate the software in order to make it compatible with the curation of art galleries.

“The partnership between Cappasity and the New York Academy of Art began with a shared conviction that fast and qualitative production of virtual museums, galleries, and exhibitions is possible,” Popov tells me. “The experience was meant to help convert online visitors into physical ones.”

For those unfamiliar with virtual reality, when you don a VR headset and connect it to compatible software, you become surrounded on all sides by what’s displayed on the screen. Essentially, everything you see and everything you hear is augmented to align the space created by the software with the details you perceive around you. Your sensory reality is replaced with the virtual reality, which in the case of an art gallery allows you to perceive the paintings and sculptures around you in vivid detail.

In the past, game developers have flirted with the idea of digital tourism and education. For example, Ubisoft’s popular series Assassin’s Creed famously added a Discovery Tour feature to Assassin’s Creed: Origins. With this enabled, you can eschew combat and narrative for a guided tour of the Valley of the Kings. As you pass through this magnificent digital space, you’re told stories narrated by professors and historians from all over the world. The Discovery Tour feature changed Assassin’s Creed’s Egypt into a significant historical space that you can explore and learn about from the comfort of your own home, adding massive potential to the educational value of interactive media.

Cappasity is pushing this to the next level. “The ongoing, multi-year partnership is aimed to showcase the Academy’s Cast Collection, on loan from the Metropolitan Museum of Art, as well as sculptures created by faculty, students and other artists,” Popov says. Because Cappasity exists in a virtual space, this collection will be made available to anybody with a VR set-up.

“We also plan to offer virtual and augmented reality tours of the Academy’s major exhibitions and galleries, allowing viewers all over the world to ‘virtually’ visit the Academy,” he adds. At present a basic version of this tour can be accessed as a demo on Steam.

Cappasity hasn’t just changed the game for prospective museum visitors, though. “The creation of an easy-to-use digitisation platform for 3D artworks has allowed New York Academy of Art sculptors and mixed-media artists to accurately and beautifully showcase their work like never before,” says Popov. “We expect Cappasity to become the industry standard for art schools’ student digital portfolios in the next few years.” As the partnership with the New York Academy of Art continues to blossom, the Cappasity for Art initiative will gain momentum, hopefully becoming a widely recognised curation tool in the near future.

Cappasity doesn’t plan to stop with NYAA, though. “The partnership with NYAA is a part of a larger initiative, Cappasity for Art, which now continues with Cappasity becoming an official sponsor and partner of In Dante Veritas, ” Popov says. In Dante Veritas is, he says, “an interactive multimedia exhibition by artist Vasily Klyukin that will be open for viewing from May 8th to November 24th in Venice”. Because this exhibition is based on interactive media, Cappasity is perhaps the best medium for it to be showcased in, because it can provide a fully immersive and interactive experience that aligns with the intentions of the artist. This showcase is where Popov and the Cappasity team plan to officially present their Cappasity 3D Imaging Solution for Art, which will hopefully raise awareness of the project and attract more prospective partners for future exhibitions.

As for the programme itself, the demo on Steam is just the beginning. “We regularly update the software and at the moment plan on releasing the plug-in for Unity, which will allow for autonomous creation of 3D, AR [augmented reality] and VR experiences,” Popov says. “We are also experimenting with visualisation of different art pieces, such as sculptures and paintings. Perhaps we’ll create our 3D digitising software [compatible with] Easy 3D Scan to make this type of visualisation easier.”

Although Cappasity for Art is currently only running projects in conjunction with NYAA and In Dante Veritas, theoretically speaking, improvements in accessibility in relation to 3D scanning could allow for individuals to use the software to exhibit their own art in virtual reality.

However, this isn’t the only kind of accessibility Cappasity has in mind. “The experience gained with the Cappasity/NYAA partnership was meant to bring the exhibit to those who for some reason are unable to attend,” Popov says. “It’s an important part of the Cappasity for Art initiative.”

For example, if a person is unable to attend an exhibition due to disability or financial difficulty, Cappasity could potentially eradicate these barriers. With Cappasity, all you need to visit a museum in virtual reality is a headset and compatible hardware. On PC, if you have access to a VR headset, you can render the exhibition in a three-dimensional digital space, making the exhibition seem tangible. In theory, you could visit a museum in Cairo from your front room in Dublin and can spend as long as you want exploring the gallery around you.

“We provide a platform that allows an owner/organiser of an exhibition to create a digital copy and embed it into websites, mobile applications, and AR/VR,” Popov says, discussing the future of the project. “If they want to showcase the digitised versions of past shows, they can certainly do that.”

Because of this, Cappasity can actually serve as a valuable archive for past exhibitions. If a show has been run in conjunction with Cappasity, it can be stored online, allowing for visitors to access it again even after the physical show has run its course.

However, while Cappasity supports archiving existing exhibitions, the team isn’t concerned with curating from scratch at present. “We don’t plan on organising our own exhibitions at the moment,” says Popov. “Our primary focus is perfecting the solution for industry professionals.”

In Cappasity’s eyes, they are providing artists with a valuable tool, but the actual art must come from the artists themselves. Thanks to their ability to scan pieces and render them in digital space, Cappasity is making art exhibitions more accessible and affording artists greater freedom than ever before. However, all they plan to do is provide the space; the art must come from elsewhere.

Source: Could virtual reality be the future of art exhibitions?