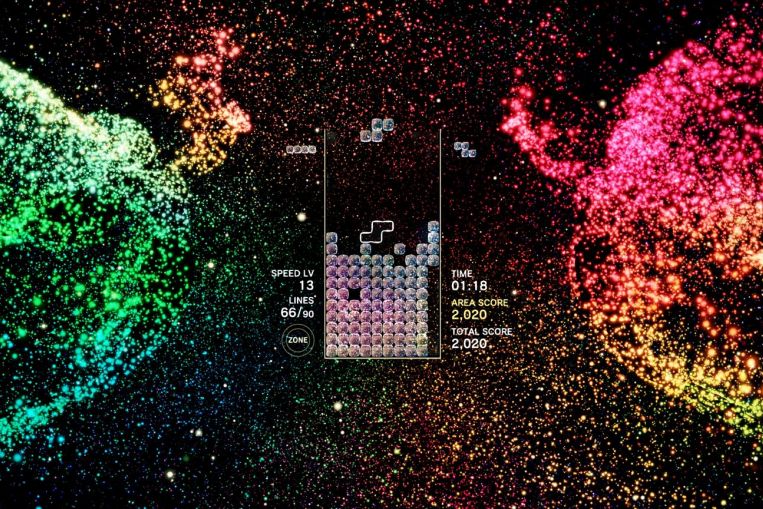 Classic game gets jazzed up | Straitstimes

Like many who grew up in the 1990s, my first encounter with Tetris was in the form of the classic Brick Game handheld console, which displayed the falling blocks or Tetrominoes on a small monochrome screen.

I found out only much later that I had been playing Tetris. Years later, I learnt about using T-spins – rotating a T-shaped Tetromino into position – to clear my lines, sending them to an opponent in multiplayer battle in the Tetris DS game for the Nintendo DS console.

The latest variant – Tetris Effect – is unlike any Tetris game I have played. While you can play it on a standard television with the PlayStation 4 console, I feel it is best played in 3D virtual reality (VR) using the PlayStation VR headset.

I have never been a big fan of VR games, but Tetris Effect changed my mind during a short playthrough at a demo session.

The game itself is a spectacular re-imagining of the original one that melds stunning visuals with the clever use of the game controller’s vibration motor and audio cues to create a multi-sensory experience.

This is unsurprising as its creator, Japanese video-game designer Tetsuya Mizuguchi, had heavily used light and sound to enhance the gameplay in his previous games, Rez and Lumines.

Tetris Effect in VR benefits from the headset’s near-total immersion. Your senses are heightened, making the game’s audiovisual effects even more pronounced.

I found myself trying to replicate this immersion on my TV by turning off the lights and using headphones. This works somewhat, but it does not approach the mindblowing VR experience via the headset.

The game’s main campaign, Journey Mode, offers more than 30 stages, each with its own theme, music and sound effects. Choose from three difficulty levels – Beginner, Normal and Expert. Most players should be able to complete the campaign in a few hours at Normal difficulty.

Stages are set in places such as the ocean, forest and desert and the visuals change as you play. The design of the blocks also varies from stage to stage, such as changing from gears to crystals.

Clearing a line of blocks causes a visual explosion of particle effects that, together with the busy background, can be temporarily blinding.

The tempo of the soundtrack, which is mostly made up of electronic dance tunes with some jazzy interludes, syncs perfectly with the speed of the blocks falling from the top. The blocks themselves seem to pulse to the soundtrack.

Tetris Effect plays it straight when it comes to the gameplay. Anyone who has ever played Tetris will find it familiar.

There is only one new game mechanic. As you clear lines, a Zone meter fills up. Once it is full, you can trigger the Zone meter to slow down time for a short while. Lines cleared while you are “in the Zone” give bonus points.

In addition to the Journey Mode, there are 15 other effect modes that switch up the format and rules of the game. For instance, Purify mode requires you to clear as many dark blocks as possible within a fixed time.

Mystery mode throws random effects at you, like turning the game upside down so that blocks fall upwards and inverting your controls to make left become right and up become down.

If you find the eye candy too distracting, the game lets you change to the classic version, with the blocks reverting to the official Tetris colour scheme.

It is a pity there is no multiplayer mode, though the entire online player community can cooperate each weekend in the Weekly Ritual challenge to complete a certain goal.

Doing so successfully unlocks new stages or modes, such as a faithful copy of the Game Boy version, down to the retro graphics and the Russian folk song Korobeiniki.

• Verdict: A trippy, audiovisual tribute to a classic video game.

A version of this article appeared in the print edition of The Straits Times on November 28, 2018, with the headline ‘Classic game gets jazzed up’. Print Edition | Subscribe