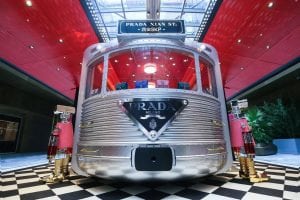 When it comes to pitching luxury goods to consumers, it looks like brands need to be trying an ‘experiential’ approach with Chinese buyers.

That’s just one of the conclusions of a sweeping just-released study conducted by Singapore-based global research agency Kadence International. Luxury brands’ ability to provide “in-the-moment” feelings and vivid experiences, such as exclusive events or multi-sensory environments, is of greater importance in shaping the perception of luxury in China than in virtually any other region, according to the “Kadence Luxury Index 2018″ released on May 15.

The study looked at 98 brands across several luxury categories and analyzed how they were perceived among 5,775 high net-worth consumers in different countries. The report concluded that the recent trend in experiential marketing in luxury could possibly be a misstep in most regions–with the exception of China and France.

“The desire to know and feel more for a luxury brand, to want a meaningful (not just material) connection, primarily motivates the Chinese’ greater emphasis on the experiential,” explained Todd Davis, Managing Director at Kadence International in Hong Kong.

To Kadence International’s standard, Italian luxury brand Fendi’s “FF Reloaded” event in Shanghai on May 26 represented a case of experiential marketing that had done everything right. The goal of this pop-up event, installed in Arkham, an underground club, was to launch a capsule collection and present the brand image of Fendi in a way to make it appealing to young consumers.

Another notable example, according to Kadence, is Coco Chanel. The beauty line of the French luxury powerhouse launched a game center in Shanghai in April to promote beauty items, riding on the gamification trend among younger customers. The setting provides a multi-sensory experience for players when visiting the store.

Kadence International further noted that marketing “experiential” to Chinese consumers need to be based on a brand’s “history” or “heritage” and “quality”, which Davis describe as two “levers” that can most effectively direct how experience for various luxury brands can be crafted.

“It substantiates any potential touchpoints, and gives Chinese HNWI the ‘reasons to believe’ in these luxury brands, in a market that’s becoming increasingly crowded as numerous brands continue to aim for a piece of the proverbial pie,” said Davis.

Porsche Experience Center in Shanghai is a case in point. By locating the center right next to the race tracks, which is not easily accessible to the general public, Porsche creates a sense of exclusivity and reinforces brand quality via experiential marketing.

The report also presented other findings relevant to luxury marketing in China. For instance, it noted “status”, a traditionally important factor, is no longer the key driver for consumers to perceive luxury in Asian markets. It ranked after “quality”, “brand heritage” and “timelessness”.

Kadence also released a list of the most “luxurious” luxury brands (below) perceived by Chinese respondents. The French jeweler Cartier tops the list, followed by Piaget and Chopard. Luxury automakers Mercedes Benz and Maserati came as ninth and tenth.  No luxury fashion brand made the list.