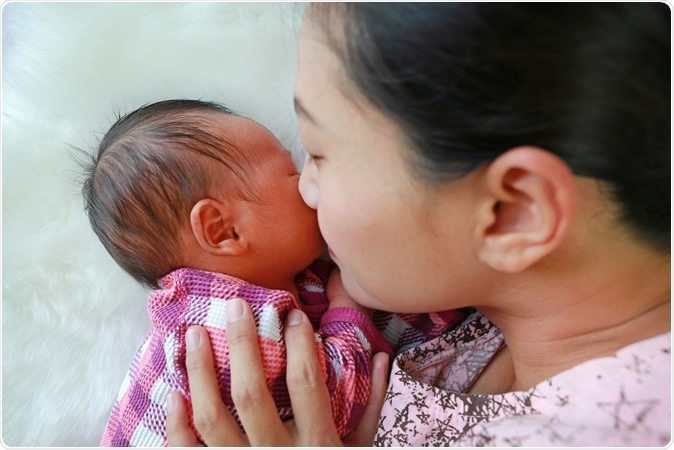 Mothers do know best – or at least their noses do, according to a new study published in the journal Frontiers in Psychology in March 2020. Of course, mothers and others love smelling the sweet smell of a healthy, clean baby. However, more than just the pleasure of that body smell, complex nose-brain interactions seem to be telling mothers more about what stage of development the child is at, according to these researchers.

A mother can sense, through her nose, not just whether the child belongs to her, but also the developmental stage of the child. This could predict the way the dynamics between the mother and child will change. The odors given off by the child are an essential factor in molding the relationship, especially when it comes to the mother showing affection and taking appropriate care of the child.

The researchers tested the reaction of 164 German mothers who were exposed to 890 body odor samples, one each from their children and four each from other children of the same sex but unknown to them, varying from infancy to 18 years old. The body odor samples came from cotton T-shirts and onesies in which the children had slept for a whole night. The mothers were asked to rate their perception of the odor on a visual analog scale (VAS) from 0 to 6, for pleasantness and intensity. They were asked to predict the stage of development of the child whose body odor they were smelling as <1 year, 1–3 years,  4–8 years, 9–13 years, 14–18 years, and >18 years.

The researchers classified the children into three categories: prepubertal (0-8 years), mid-pubertal (9-13 years), and postpubertal (≥14 years). Seven children aged 14-18 years whose ages were not in keeping with their stage of pubertal development were excluded, as well as all the 42 children aged 9-13 years, because they were at a transitional developmental stage.

The researchers found that in almost two out of three cases, the mother’s guesses were accurate when it came to detecting prepubertal odors. The mothers tended to classify more of the odors as prepubertal odors even when they came from children past this stage.

Moreover, the findings showed that when confronted with samples from children of the same age group as their children, the mothers tended to think of more pleasant odors as coming from prepubertal children, and of more potent body odors as from postpubertal children. Body odors were also more likely to be classified in keeping with their pubertal development score, but not in accordance with the hormonal levels.

When faced with smells from children of a different developmental stage than their children, mothers with older children tended to classify stronger smells as postpubertal. In comparison, those with younger children relied on both pleasantness and intensity to classify the source of the odor. This indicates the role played by developmental familiarity.

Some other interesting findings were that mothers tended to think of their own son’s odor as less pleasant around puberty, in association with rising levels of testosterone; and mothers were unable to pick out their child’s body odor around puberty accurately but could do so before and after puberty.

The investigators hypothesize that this could mean mother-infant bonding at a crucial point in the child’s life could well be mediated by the baby’s smells, triggering an affectionate response. One researcher, Laura Schafer, says, “This suggests that infantile body odors can mediate affectionate love towards the child in the crucial periods of bonding,” while on the other hand, odors that are thought of as coming from older children past puberty may signal the need to detach, “when the child becomes more independent and separates itself from parental care.”

The researchers also think that a mother stops preferring her child’s odor around puberty because of the release of hormones at this time, which they interpret as “loss of kin recognition”; and they also suppose that the mother learns to re-identify the odor of her child over time, leading to recovery of maternal preference for her child as her own kin.

Earlier studies from the same laboratory based on functional magnetic resonance imaging (fMRI) of mother’s brains when exposed to baby smells showed that the nerve cells responded to these odors in the same way as detected in various other MRI studies based on the cuteness of a baby’s face. In general, the researchers say, “Several infantile facial characteristics facilitate perception of cuteness, and thus elicit approach and attachment behavior.”

Researchers think this supports the idea that the bonding between the mother and child is dependent in part on the stimulation of the mother’s smell centers by the baby’s odors.

The implications could include helping mothers with weak bonding to develop a better relationship with their infants, in part by using methods like neurofeedback. In this case, the smells could be used to train the brain to recognize negative mother-child interactions and then to initiate more positive brain activity associated with the baby’s scent, creating a new habit of positively responding to the baby. Olfactory training is another possibility. Here, the rewarding aspect of body odors is the focus, promoting the deliberate choice of those mother-child interactions that stimulate the reward circuits of the brain by the smell in this case.

Such interventions are usually required in conditions like postpartum bonding failures due to maternal postpartum depression. They could be part of a program that combines affective touch (touch, which is linked to sensory or emotional stimulation, like gentle stroking, for instance) and olfactory stimuli.

The research leaves unanswered questions as to how the human nose obtains this information. The observation prompts that hormonal levels are not necessary for how the mother classified the subject’s developmental stage. Similarly, food and culture also affect body odor but are not accounted for in the current study.

Schafer says, “Intraindividual changes should be tracked in a longitudinal study to find further evidence for these results, to map indicators of the transition to puberty, and to find out whether this is reflected in the maternal perception of body odor.”