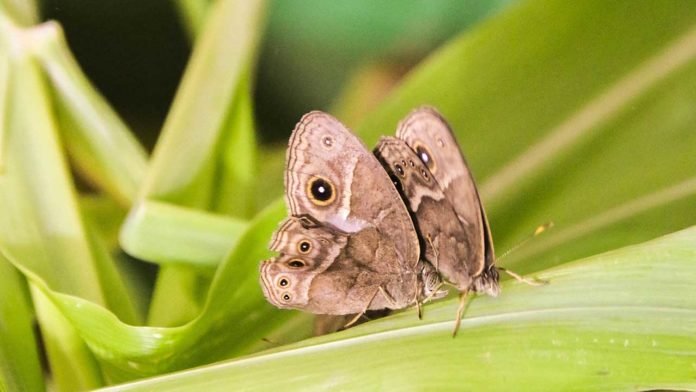 It was long believed that physical characteristics acquired by organisms during their lifetime could not be passed on to their offspring. However, in recent years, the theory of inheritance of acquired traits has gained support, with studies showing how offspring of rats and tiny worms inherit behaviours that were acquired by their parents in response to particular environmental stimuli, even when the stimulus is no longer present in the offspring’s generation.

This theory is further supported by recent studies conducted by researchers from the National University of Singapore (NUS), in which they found that the inheritance of acquired traits also happens in butterflies, especially in the bush brown butterfly Bicyclus anynana.

Two research teams supervised by Associate Professor Antónia Monteiro, who is from the Department of Biological Sciences at the NUS Faculty of Science, as well as from Yale-NUS College, showed that both Bicyclus anynana caterpillars and adult butterflies can learn to prefer new odours if they are exposed to them during their development or early in life. The researchers also found that the offspring of the exposed caterpillars and butterflies show the same new preferences as their parents, even though they were not exposed themselves, indicating that their parents have passed their new acquired preferences to their children.

The findings of the two studies were published online in the scientific journals Evolution in October 2019 and Nature Communications in January 2020.

Learning to like new odours for feeding and mating

In the study that was published in Evolution, NUS doctoral student Ms V. Gowri, research fellow Dr Emilie Dion, and their collaborators exposed caterpillars and butterflies to new odours they typically do not experience in their natural environment. In the experiments, caterpillars were fed with corn leaves – their usual food – coated with banana or with mango essence throughout their development. Most of these caterpillars preferred to eat leaves with the fruit essence after only a few days of exposure.

In the second study, which was published in Nature Communications, Dr Dion and her collaborators exposed young female butterflies to new sex pheromone blends, a perfume produced by males to entice females to mate with them. The results showed that the exposed females later preferred to mate with males having the new pheromone blend.

“These results are significant because they show that insects are not only driven by their instincts, but can also learn from their previous experience and adjust their future behaviour accordingly. The consequences of their learning abilities on their survival and reproduction can be very important,” shared Dr Dion.

Offspring acquired the learned preferences of their parents

Both studies examined the behaviour of the offspring of the exposed Bicyclus anynana caterpillars and butterflies. The results revealed that the new generation also exhibited the same preference for the new food odours, or the new sex pheromone blends, although they were never exposed to these odours themselves. The teams concluded that the offspring inherited the preferences acquired by their parents.

While these learning and inheritance processes are hypothesised to facilitate the evolution of diet diversity across insects, and mate selection over the course of insect diversification, the impact of this inheritance mechanism on evolution is still unknown.

“We are now investigating whether this behavioural transmission is maintained for more than one generation, and also probing the underlying molecular mechanisms in our model species, as these remain some of the most exciting unanswered questions in the field of evolutionary biology,” said Assoc Prof Monteiro.

Source: Butterflies can acquire new scent preferences and pass these on to their offspring – Tech Explorist