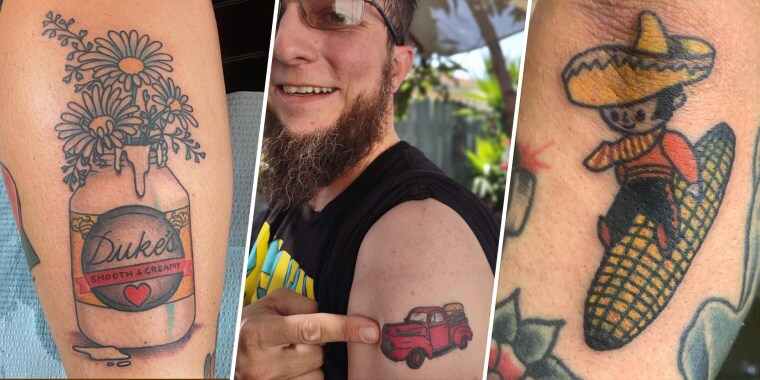 Brands offer free food to those who get their logos tattooed. These people actually did it | Today

For Anaheim resident and assistant manager Jim Ceja, all it takes is someone to see his favorite tattoo of the six he’s gotten across his body for a familiar conversation to begin.

“I got the one with the truck with a burger in the back, and so a lot of people see the red truck and then they see the burger in the back there,” Ceja told TODAY Food. “They’re like, ‘Well, that’s really cool. What’s up with the burger?’ That just leads me right into the story.”

On April 13, 2021, Farmer Boys, a California-based fast-food chain, ran a contest to commemorate its 40th anniversary. To celebrate the restaurant’s 1981 founding in Southern California, the contest was simple: Contestants had to sit for a tattoo session to receive permanent ink somewhere on their body, choosing from three color tattoo designs measuring two square inches. It was then the newly-inked could claim their prize: one full year of free burgers.

“You could go once a week to get free food, and I did,” said Hilary Frazier, a legal records supervisor in Riverside, California. Frazier is another recipient of a Farmer Boys tattoo and got a small cheeseburger with the Farmer Boys logo above it placed on her upper thigh. “I tried all the burgers. I’ve tried all the sandwiches. I wanted to make sure this was my chance to try everything. So I did.”

Frazier said her go-to order for the year was a basic cheeseburger, like her tattoo. While the contest was a means to a year of free lunch that has since ended, the opportunity to have a permanent conversation starter at parties was too tempting for her to ignore, especially if anyone who doesn’t know her asks about the ink.

“I laugh first, just because it’s so funny to me that I did it,” Frazier said of the tattoo. “I usually just tell people I took a chance. I saw something online, and they offered up a free cheeseburger tattoo. And I thought, ‘How could I pass that up?’ So I entered.”

Ceja said his wife sent him news of the sweepstakes “as a joke,” and that she had no idea he would actually go through with getting it.

“I thought, shoot: free burgers for a year and a free tattoo? Yeah, I’ll do that,” Ceja said. That sentiment was shared by many of the participants in the sweepstakes, including Whittier, California resident Ashleigh Berger.

“I thought the promotion was pretty cool, you know?” Ashleigh Berger said in an interview with Farmer Boys after receiving her ink, one of a red pickup truck, as part of the contest. “A free year of burgers? Sounds good.”

All in all, 73 separate people ended up getting a tattoo for free food, receiving their ink from one of two tattoo parlors based in Las Vegas or West Hollywood. Ceja, who only ended up missing five or six weeks of his winnings, said he finds his tattoo beautiful and he truly loves it.

Both Ceja and Frazier said that even though the deal has since ended and they still have their permanent burger-based tattoos for life, they loved the whole experience and would “definitely” participate again if the restaurant were to have another contest.

Daisy Alvarez, senior director of marketing for Farmer Boys, told TODAY that while there are no current plans to run another contest, it’s definitely a possibility that has been discussed by the Farmer Boys team.

Farmer Boys isn’t the only brand that has gone viral for a free food giveaway in exchange for a permanent tattoo. July 17 is National Tattoo Day, which also happens to coincide with National Ice Cream Day. To celebrate the holiday, ice cream brand Drumstick is running a tattoo contest through the end of July for a chance to win a year’s worth of Drumstick Sundae Cones.

Entrants are asked to share a photo of either a permanent or temporary tattoo of their signature ice cream cone on Instagram or Twitter with the hashtag #DrumstickInk, and though many of the entrance either emblazoned their skin with temporary tattoos, drew them on with marker or exhibited more loose definitions of what a tattoo is supposed to be, one entrant made the dessert part of a tattoo sleeve, joining writing and a natural scene on his bicep. But why would someone go with that tattoo? The answer is clear: nostalgia.

“Drumsticks are life! I used to eat them on the daily for quite a few years, until sadly I gained a peanut butter allergy,” said Brett, who goes by @fluent4sk on Instagram, in a direct message to TODAY. “Needless to say the only drumsticks for me now are in the chicken form, or my tattoo, of course.”

In May, cult-favorite mayo brand Duke’s partnered with Richmond tattoo shop Yellow Bird Tattoo to offer free ink to several dozen folks who agreed to the Virginia-based brand’s tattoo stipulations. Participants who agreed were to get ink placed on either their arm or leg and got to choose one of 40 different mayonnaise-themed tattoos drawn in a traditional style. Each participant walked away with a new tattoo, and one (1) jar of Duke’s Mayonnaise.

The event was so popular that Duke’s had a waitlist of over 1,000 requests and had to request extra reception at the tattoo parlor in order to handle the increase in traffic. Following the contest, Duke’s compiled some of the tribute tattoos on an Instagram account called @dukesmayotattoos.

That is not to say that every one of these contests has run smoothly. In 1998, San Francisco restaurant Casa Sanchez offered free lunch for life to anyone who had the restaurant logo, a little boy in a sombrero riding a corn-cob rocket, tattooed on their body. Thinking no one would ever take them up on it, owner Martha Sanchez hung a sign in the front window of the restaurant … and waited.

They would decide to stop offering the deal after 40 separate people took them up on it. Early calculations showed the contest could potentially cost the restaurant $5.8 million over time.

One man, Greg Tietz, got his tattoo, his free food and an unexpected worldwide publicity tour, appearing along the restaurant in local newspaper stories and interviews on CNN and NPR. Tietz even eventually appeared on German and Chinese television. But he was not the only participant to claim their winnings.

“A few years ago, I got a tattoo of the Casa Sanchez logo in order to get a free burrito from the restaurant,” Delia Joyce told TODAY. “I wasn’t the only one; there was a line of people waiting to get their free tattoos.”

Joyce said she didn’t even have to leave the restaurant to get the tattoo: Casa Sanchez had a table set up in the back where people could get inked. The restaurant offered the deal again after its original 1998 run in 2010, calling it a “stimulus special,” although people who got tattooed the second time around had two years to get free tacos before 2012, when the original restaurant was shuttered.

Still, Joyce said she thinks the trend of tattoo contests for food is only going to continue as long as there are foods and food brands people love. Taking a look at the hashtag #foodtattoo on Instagram, folks show off their food-themed ink: Sushi, cans of Dr Pepper and Simpsons-style pink doughnuts might have meaningful backstories, but they also might not.

“Tattoos don’t always have to have some deep, profound meaning,” Frazier said, adding that if anyone she may come across in the future would express their distaste for her Farmer Boys tattoo, she has a response in the chamber ready.

“I agree, I think it is silly,” she said. “My other tattoos may hold emotional significance, but not all of them.”

Frazier has considered adding onto her burger tattoo with some fries and a shake, and even though the time period her winnings has now passed, she still continues her weekly tradition of lunch at the restaurant she has permanently etched onto her person.

“It’s OK to have fun in your life,” Frazier said. “I saw this as an opportunity to do something fun for myself. So I say, do you want a silly tattoo? Go for it.”

Source: Brands offer free food to those who get their logos tattooed. These people actually did it