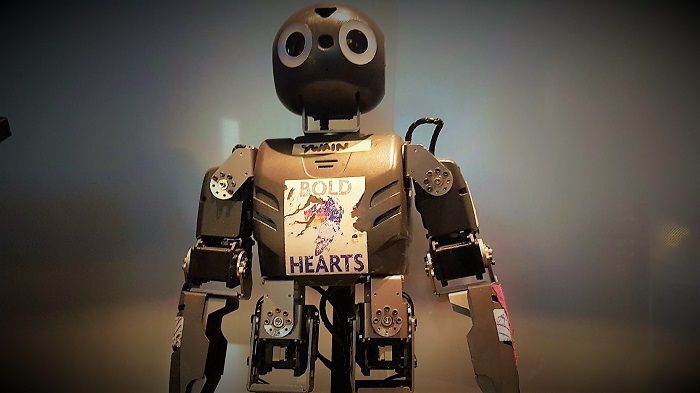 By msensory team09/11/2019No Comments
A robot figure on display at the Barbican Centre, London.
■ Tim Sandle
A new study demonstrates how a biologically-inspired skin improves robots’ sensory abilities. This development is seen as a stepping stone towards developing robots that are able to interact more closely with people.

research comes from the Technical University of Munich, and demonstrates how sensitive synthetic skin can assist robots with sensing their own bodies and surroundings. This is considered vital if robots are to interact with people in a more meaningful way.

The new development from the German researchers is inspired by human skin. The scientists constructed a means to combine artificial skin together with algorithms and used the output to develop what they describe as the first autonomous humanoid robot that comes equipped with full-body artificial skin.

The special skin is formed of hexagonal cells, each around the size of a small coin (one inch in diameter). The cells are fitted with a microprocessor plus sensors that can detect contact, acceleration, proximity and temperature.

The skin will permit robots to assess their surroundings to a higher level of perception that has previously been possible together with greater sensitivity. This will aid the robots to move safely, avoiding collisions especially when they are interacting with the general public.

The main challenge with the development has been computing capacity. This is reflective of the complexity of human skin, which has some 5 million receptors. This means any full- artificial skin will continuously process of data and these data need to be assessed and reacted to by the robot.

The challenge was addressed by not seeking to monitor all of the cells continuously, but instead adopt an event-based system, which lowers the computing effort needed by 90 percent. This is achieved by having individual cells only transmitting information when values are changed, which happens to be the way by which the human nervous system works.

The research has been published in the journal Proceedings of the IEEE. The research paper is titled “A Comprehensive Realization of Robot Skin: Sensors, Sensing, Control, and Applications.”

In related news, French researchers have constructed a soft artificial skin that enables haptic feedback. This has the potential to adapt to a wearer’s movements in real-time. The technology could be used for medical rehabilitation and to improve virtual reality.