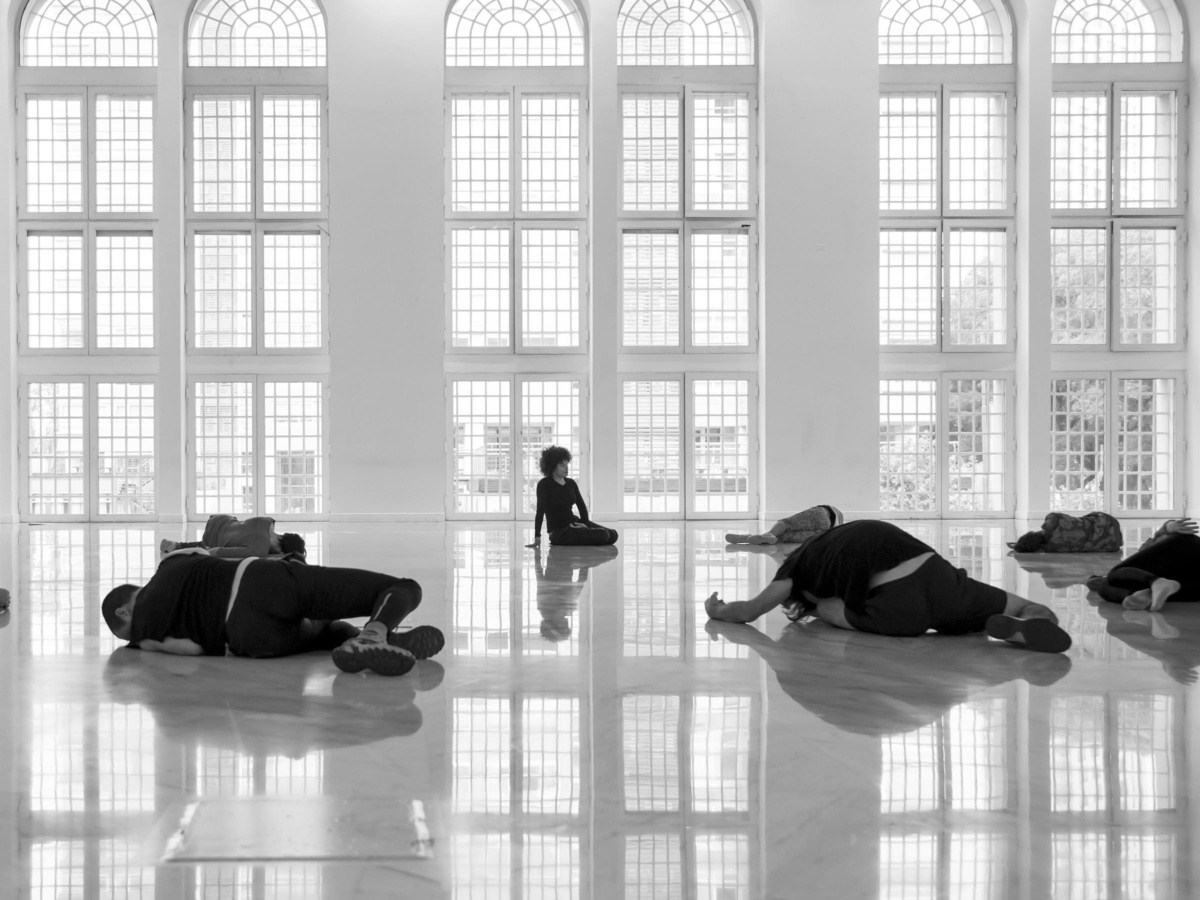 As part of the inaugural Buenos Aires Art Week earlier this month, Faena Arts presented a series of performances based around Alfredo Jaar’s This is Not America billboard, which was installed along the city’s main thoroughfare. Among the highlights of the festival were works by Berlin-based multi-media artist Isabel Lewis, whose practice stretches from choreography and dance to classics and fashion. Following her recent collaboration with Matthew Lutz-Kinoy for the Sharjah Biennial, Lewis hosted Argentine dancers and long-time friend Marcelo Alcaide for the most recent iteration of her visceral, immersive occasions.

For each project you do, you work closely with dancers who are local to the city. Can you talk about the evolution of your piece in Buenos Aires and some of the ways in which working there was different than working in other cities with other groups of people? I have developed a form of auditioning people through video submissions in which the dancers and performers are asked to submit two short videos. In one they answer the question “What forms of bodily engagement to you feel contribute to living a good and flourishing life in the 21st century?” In the second, they film themselves simply dancing to a favorite song of their choice as though they are dancing for their own pleasure and enjoyment as one may do alone in one’s room. These two videos give me what I need to assess what I am looking for—which is thoughtful, sensitive people with a strong energetic presence who have dance training and experience but who also can connect to the bodily pleasure of dancing beyond technical execution. I have done this auditioning process in different countries, for example in Switzerland and in the USA and I found the level of dance experience and technique very high in Buenos Aires. This was the first place where almost every person who applied mentioned sexual engagement as part of living a flourishing life. In Miami and Philadelphia a lot of people mentioned engaging socially with community and in Switzerland a lot of people mentioned engaging with nature. I found that there was an honesty and directness as well as a deep sensuality to the people I encountered in Buenos Aires and I enjoyed this very much.

Your pieces take the form of “occasions” that you “host.” Part of the reason for this is what you describe as your resistance to the dominance of the visual. How does your work challenge this dominance? When I am composing, I think about addressing all of the senses. I sculpt the work on multiple sensory levels, including vision of course but by directly addressing and highlighting the other senses I try to check the power of vision. It’s not the mechanism of sight itself I take issue with. I take issue with the way in which culture of Enlightenment, which has shaped modernity and still holds too much power our contemporary world, thinks about, educates, and instrumentalizes vision in violent ways. I think a lot about a quote from Donna Haraway’s book Simians, Cyborgs, and Women: The Reinvention of Nature: “The eyes have been used to signify a perverse capacity—honed to perfection in the history of science tied to militarism, capitalism, colonialism, and male supremacy—to distance the knowing subject from everybody and everything in the interests of unfettered power.” In my work I refuse to only address the eyes and work with arrangements of people, things, sound, plant life, furniture, dances, and smells made in collaboration with smell researcher Sissel Tolaas. I also collaborate with a local chef in each city to create amuse-bouches. In order to create a kind of space that could include these multiple elements and be immersive and experiential I developed my work around the notion of hosting. A performer presents themselves in front of a removed and distant public while a host crafts a situation that they share with the public. In the hosted occasion performers and public blur as all of us are having individual experiences inside a shared affective space. 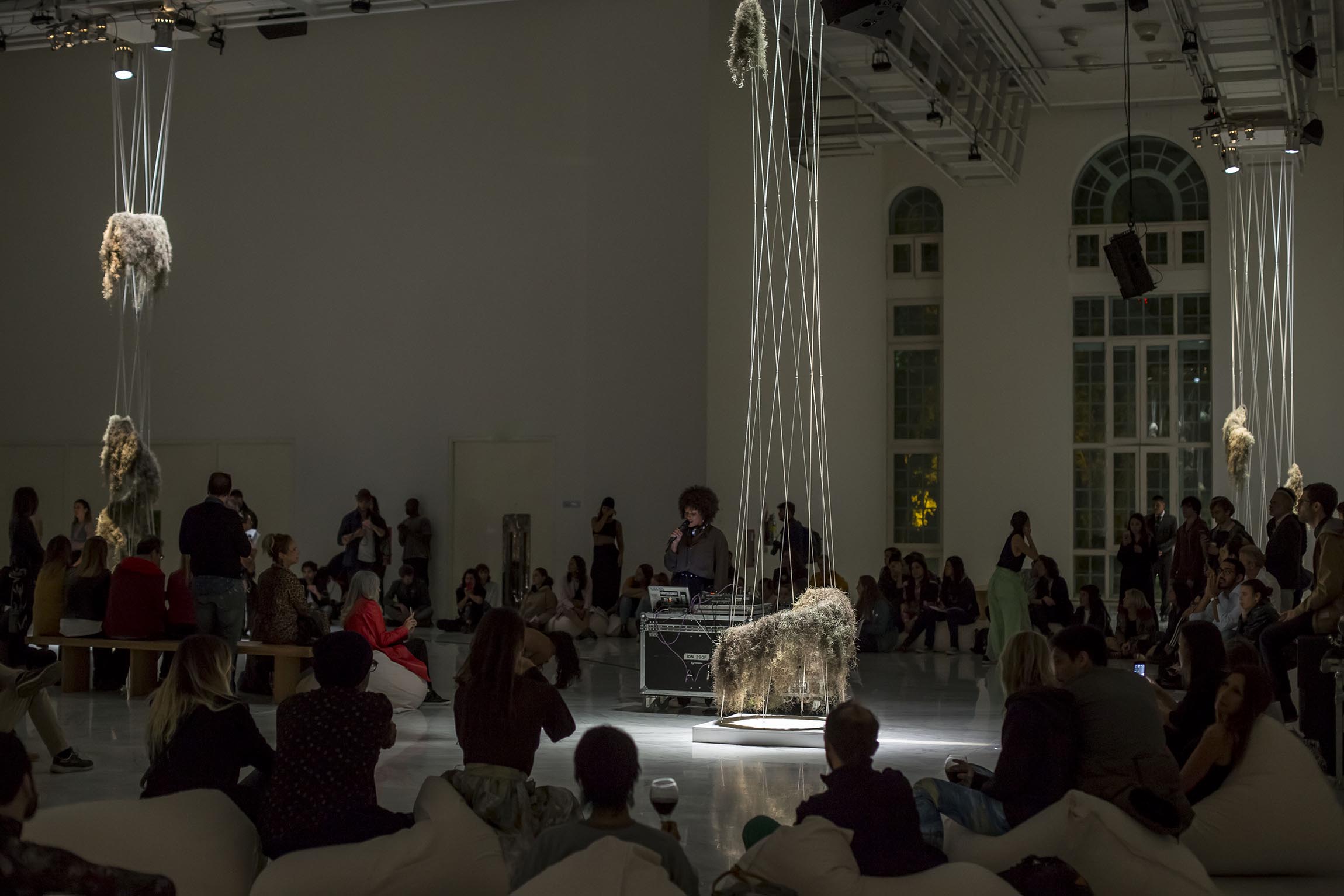 LEWIS READS FROM PLATO’S SYMPOSIUM, DURING THE PERFORMANCE.

You were a dancer and working in theater and then shifted to working in a specific “contemporary art” context. What drove that decision and how has it affected the way you think about your work and the way other people think about your work? It wasn’t a decision as much as it was something that happened out of my insistence on experimenting with format. Contemporary art institutions seemed more open to experimentation with format and so the invitations from that field came more readily. The basic architecture of the theater with stage and auditorium is not so conducive to my way of creating live art. There is of course the black box designed to be modular with moveable seating elements, but typically the black box tries to be a “neutral” space in the same way the white cube does—both are kinds of non-spaces. I work in a site-specific way no matter where I am. Each space is considered as a site with a specific history and holding specific energies and I craft the work to engage with these histories and energies.

Can you tell me about the collaboration w Courréges? Marcelo Alcaide is a dear friend and collaborator of mine for many years. He also has a longstanding collaboration as a creative producer with Yolanda Zobel, who is the new creative director of Courréges. The three of us are linked through longstanding deep friendships and working relationships with several artists, designers, curators, activists, musicians and DJs in Berlin. We were brought together while working on this mad 72-hour continuous performance program created under the name Pane Per Poveri (bread for the poor) that happened as an alternative program to the Venice Biennale in May 2015 in the theater of a derelict hospital by the sea on Lido. Our collaboration really began there. It’s rooted in friendship and mutual love for making shit happen, for creating alternative and loving spaces for experience with a very direct and punk energy, all will, all heart, going-for-it and manifesting beauty out of nothing kind of vibe. Since Yolanda stepped into her directorial role with Marcelo as her right hand at Courréges, things started to evolve more quickly. I began having regular and ongoing creative conversations about the new vision for Courréges with Marcelo and Yolanda and have choreographed their last two fashion shows. I also develop written content for their Instagram. Marcelo has been working with me closely over the last few years to develop the textural language of the dress for the performers in my works. I don’t work with “costume” per se and like each performer dressed uniquely. The styling has to be contemporary and feel relatable to the public but should also heighten the physical presence of the performers. The individual personalities of the performers also need to be reflected in their dress so they feel good and confident. It’s not easy to perform in such proximity and be in direct contact with the public so I want the performers to feel grounded and strong. And it’s necessary that the materials on the bodies of the performers communicate with the materials of the architecture and elements of installation in the work. It’s not an easy task at all and Marcelo seems to have a particular brilliance for this weaving together textures and color and taking all the details of the work into account. He often incorporates pieces from different brands that he feels resonate with the ideas and ethos inside my work.

During the performance at Faena, you read from Plato’s Symposium. Why this particular text? A lot of my research revolves around trying to understand how contemporary culture of the US and Europe got to be how it is and how exactly this myth we call “the West” came to be. I dig through all kinds of texts from sociology and philosophy to fiction and literary criticism, history of science, and economics for the stories that form this myth. I have also spent a lot of time studying Classics, a strange field that has been instrumentalized in all kinds of strange ways. The Ancient Greeks get evoked time and time again in European and American history by white men in politically and ethically questionable ways. I wanted to evoke it in my own way, to retell the story in my way, almost like sampling in DJing, to bring it into my own sense of aesthetics and politics. I enact the step ladder process of falling in love that Socrates lays out in the Symposium and then I speak about the interruption of the entrance of Alcibiades and his confession of love for Socrates. I focus on the two different approaches to love these two figures represent. Socrates’s story follows a very rational development of love from lust to the transformation and sublimation of physical desire into the love of pure knowledge itself. American Classicist Martha Nussbaum in her book The Fragility of Goodness, proposes that what has been cast historically as “profane” love, desirous bodily love, can as well be a powerful form of knowledge. She refers to this as the “lover’s understanding.” The lover’s understanding is for Nussbaum a form of receptivity to our beloveds, a form of knowledge that goes beyond knowing things about them into knowing how to respond, to please, to behave for the pleasure and well-being of our beloveds. Outside of Plato’s dialogues Alcibiades and Socrates the actual historical figures, have tragic and violent deaths at the hands of the state. I pose the question about whether there might be a middle ground, or alternative third articulation of love that might lead towards a flourishing life. As my work revolves around sociability, I am really interested in the ways we form our interrelations with other humans, species, and things. I find that the way we think and imagine selfhood and otherness is a very coded and culturally specific thing. I have this feeling that if Western culture could shift or adjust its sensibilities about perceived otherness or difference away from fear and violence and towards connection and love we might be able to carve a path towards more ethical and equitable relations with our environment and one another.

PERFORMERS ARE DRESSED IN COURRÉGE IN A DRESS REHEARSAL