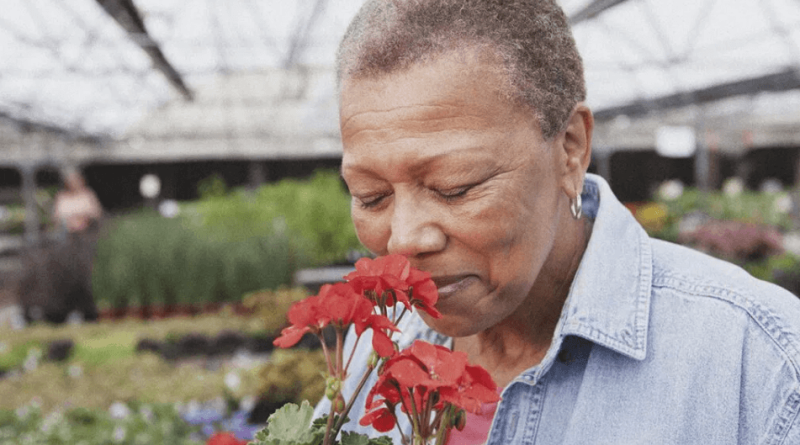 By msensory team29/06/2022No Comments
This article or excerpt is included in the GLP’s daily curated selection of ideologically diverse news,
opinion and analysis of biotechnology innovation. It is posted under Fair Use guidelines.

The sudden inability to smell and taste that comes with COVID is startling and difficult to describe. I was lucky to experience it only for a few days.Anosmia is the partial or total loss of the ability to smell, which vanquishes most of the sense of taste, too. The COVID version is more profound than the familiar dulling of the sense from the mucus of a common cold. And it has a different origin.

The odd part of COVID anosmia is that the virus alters gene expression in nerve cells in the nose – even though the virus can’t actually enter nerve cells (neurons). Then the temporarily crippled cells can’t signal the brain that the person is inhaling near the seashore or passing a garbage dump. Understanding the basis of the secondhand assault may clarify other puzzling effects of the changeling coronavirus – perhaps even long COVID.

First, a closer look at how the sense of smell works.

The source of the sense of smell is a yellowish patch of tissue the size of a quarter high up in the nose. It consists of 12 million or so nerve cells, called olfactory sensory neurons, which nestle within lining cells (the olfactory epithelium).

Hair-like cilia extend from the ends of each neuron and wiggle about in the nasal cavity. Each cilium is festooned with proteins that function as olfactory receptors – they bind “odorant” molecules from food. Sniff a plate of lasagna and they flood in, emissaries from tomato and oregano, garlic and cheese.

When the odorant molecules dissolve in the mucus coating the receptor proteins on the fringe of cilia emanating from the nose neurons, the nerve cells signal the brain, winding through tiny openings in a bone. There they connect with other neurons in the olfactory bulb region. That in turn messages the part of the cerebral cortex that interprets the information as a particular odor, perhaps tapping into memory or emotion from other brain centers. Within seconds, integration of the signals spells “lasagna” in our consciousness. 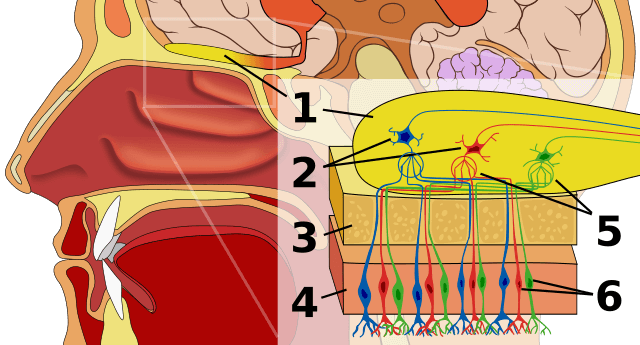 But how the signaling works was a mystery, until 2019.

When I wrote the first edition of my intro biology textbook Life, circa 1990, we didn’t know how, exactly, we smell. So I did what scientists do, and hypothesized a mechanism. That’s a fancy way of saying handwaving:

Exactly how the brain interprets the message as an odor and identifies it is still a mystery. How, for example, do the myriad of molecules stimulating olfactory receptors become identified as chicken soup?

One theory to explain how a limited number of receptors can detect a nearly limitless number of odors is that each odor stimulates a distinct subset of receptor subtypes. The brain then recognizes the combination of receptors as an olfactory code. For example, perhaps there are 10 types of odor receptors. Banana might stimulate receptors 2, 4, and 7; garlic receptors 1, 5, and 9.

A combinatorial code makes sense, for that’s what nature does, and is the very basis of genetics: Trios of four types of DNA bases encode 20 types of amino acids, which combine into our 20,000 types of proteins.

So how do snorted molecules become a tantalizing odor? In 2019, researchers from the Monell Chemical Senses Center in Philadelphia identified the nearly 400 human olfactory receptor proteins. The team cracked the code of smell by looking at the genes of people who can’t smell particular odors – the classic strategy in genetics of discovering how something works by focusing on when it doesn’t. These unfortunate folks have mutations that knock out individual receptor types. And because a mutation is present from conception, the deficit has always been there for them.

Most of us don’t have mutations in the genes for olfactory receptors. Instead, the day-to-day sense of smell arises from patterns of gene expression, which is transient. Transcribing a gene into messenger RNA (mRNA) and translating the mRNA into the receptor proteins that bind the food molecules changes with circumstance. And the nasty new virus vanquishes the gene expression behind the ability to smell. It isn’t a permanent change like a mutation, which offers hope to those with persistent COVID anosmia.

Probing the noses of hamsters and dead people

The NYC researchers experimented with hamsters and patches of olfactory epithelium from the noses of 23 people who had died of COVID. The hamster is a good model because it depends on the sense of smell more than humans do and is more susceptible to infection in the nasal cavity.

The cause of COVID anosmia turns out to be viral triggering of immune cells that move to the olfactory epithelium, where they pump out cytokines (like interferon) that signal the nearby olfactory sensory neurons. Commandeering the immune response and turning it against the human body seems to be a hallmark of SARS-CoV-2; it’s why human lungs can explode with inflammation. The assault on the sense of smell is a variation on that theme.

The cellular promiscuity of SARS-CoV-2 is terrifying. “The work suggests how the pandemic virus, which infects less than 1 percent of cells in the human body, can cause such severe damage in so many organs,” said tenOever.

The researchers used a technique called spatial transcriptomics to track which mRNA molecules are made in which nose cells. And they found that during COVID, the neurons that provide olfaction aren’t depleted, but their activity is quelled – typically for a few days, but this varies greatly.

Unlike my inventing the smell code for a banana, spatial transcriptomics reveals a highly specific chaos inside the olfactory sensory neuron’s nucleus during COVID. That sounds paradoxical, but it isn’t.

In a healthy cell not in the midst of dividing – which neurons don’t do – DNA isn’t compacted into chromosomes, but consists of thin entangled strands, called chromatin. When chemical signals arrive that evoke a specific function, the genes that carry it out, even if part of different chromosomes, come together in the mass of chromatin threads so that they are transcribed together. So what looks like chaos is actually quite choreographed. And that control breaks down during COVID.

The investigators call the situation “disruption of nuclear architecture.” Like a cell phone that can’t get incoming messages, the odorant receptor proteins that bind food or other smelly molecules aren’t made.

Experiments on the hamsters showed that it is the initial inflammatory response of the immune system that the virus activates. Specifically, the outpouring of cytokines shuts down production of odorant receptors and therefore the sense of smell. As the cytokine bath continues, smell and taste are dulled.

The flood of cytokines explains why the virus itself need not bind to the olfactory sensory neurons to shut off smell. For most people, the receptors are eventually rebuilt and smell returns fully within 6 weeks. Those with lingering loss of smell may have lower-functioning or depleted stem cells that create new olfactory sensory neurons, or at least that’s one hypothesis. The stem cells in the nose are one of the few outposts of the nervous system capable of regenerating depleted specialized cells.

For 90 percent of people with COVID, smell returns within 6 weeks. For the other 10 percent, the researchers hypothesize a more profound pausing of transcription of the odorant receptor genes, calling the sustained disruption of genome architecture a ‘‘nuclear memory’’ for persistent, long-term anosmia.

Is faded olfaction a canary in a coal mine?

The discovery of disordered chromatin behind COVID anosmia is consistent with altered olfaction as a harbinger of other neurological conditions. Since the 1970s, dampened sense of smell has been recognized as an early part of Alzheimer’s, Parkinson’s, and Huntington’s diseases, and multiple sclerosis.

Anosmia in COVID is so common that it will take time to figure out when it is a danger sign. Said tenOever, “If olfactory gene expression ceases every time the immune system responds in certain ways that disrupts inter-chromosomal contacts, then the lost sense of smell may act as the ‘canary in the coalmine,’ providing any early signals that the COVID-19 virus is damaging brain tissue before other symptoms present, and suggesting new ways to treat it.”

It’s nice to once again enjoy a cup of coffee.

Ricki Lewis, PH.D is a writer for PLOS and author of the book “The Forever Fix: Gene Therapy and the Boy Who Saved It.” Check out Ricki’s website and follow Ricki on Twitter @rickilewis

A version of this article was originally posted at PLOS and is reposted here with permission. Find PLOS on Twitter @PLOS

Source: Anosmia and COVID: Does loss of smell from coronavirus signal more serious neurological issues ahead?