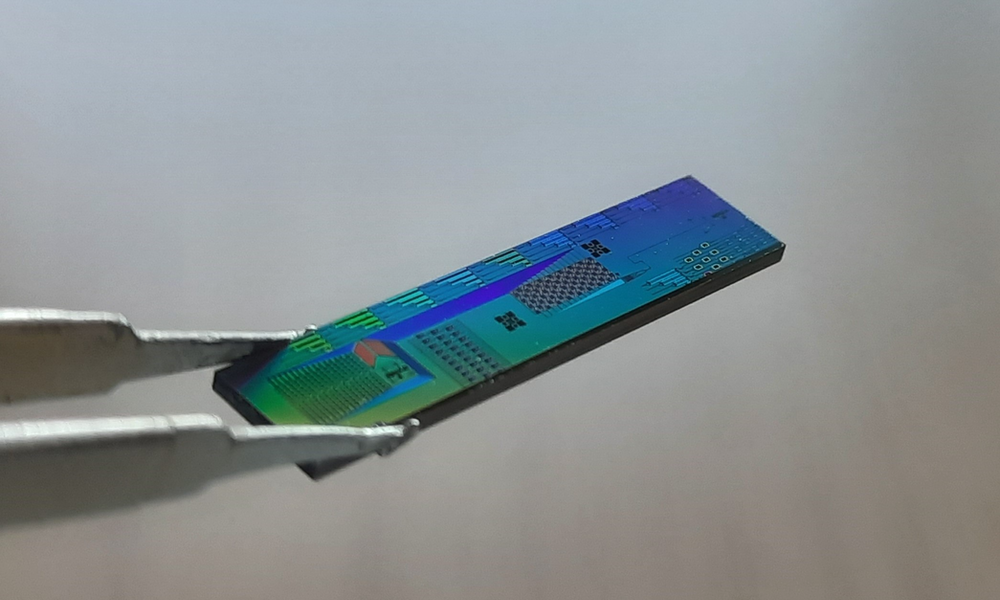 A bio-inspired detector the size of a US penny can identify the unique odor profiles of different gases, something that could help in detecting food freshness and product counterfeits and in designing new cosmetics.

Breathe in the vapors wafting from your morning cup of coffee and you might experience the aromas of pomegranate and white chocolate. Or you might not. Pinning down the sensory qualities of an odor is a subjective task, but new technologies are looking to provide objective methods. Now, using a method that mimics the human olfactory process, researchers have developed a tiny photonic sensor that fits on a silicon chip and can identify odors by their chemical profiles [1]. Thierry Livache of Aryballe, France, presented the sensor at SPIE Photonics Europe earlier this year. The tool could help industries determine if a lemon is fresh enough to send to market, a new perfume matches consumer wishes, or a bottle of whiskey is a counterfeit.

Every time you breathe in, the 400 nerve-connected receptors in your nose each bind to one of the millions of different chemicals—called volatile organic compounds (VOCs)—that waft through the air. Neurons in the back of the nasal cavity then aggregate the signals from those receptors and transmit the overall detected chemical profile to the part of the brain responsible for smell identification and emotion. The brain then identifies this odor profile, or smell “fingerprint,” assigning it some fragrance descriptor—lemony, floral, smoky—based on your experience.

Optical and electronic “artificial noses” exist that can mimic this process using bio-inspired receptors called peptides arranged in a grid on a metal surface. VOCs in an odor-bearing gas bind to the peptides, changing how the underlying metal surface interacts with light. With enough peptide types, such a device can generate a unique light response for each different odor it interacts with, Livache says. Pattern recognition electronics can then identify the sources of these light-based fingerprints by matching them to patterns in a database. Previous versions of such detectors made at Aryballe, a company that makes biochemical sensors, were bulky and took the form of expensive handheld scanners. The new device instead fits on a 22-mm-long and 4.7-mm-wide silicon chip.

This device developed by Livache’s team and the French Alternative Energies and Atomic Energy Commission, CEA-Leti, detects the presence of VOCs by monitoring the shifts they induce in the paths of beams of light directed down 128 460-nm-wide waveguides, half of which are embedded with peptides. The waveguides are grouped in pairs, with each pair forming one sensor. Light directed into a pair gets split when it enters the sensor and recombines at the end.

Each sensor is set up such that its left waveguide sits in a 2-µm-deep well filled with peptide receptors. The right one is a straight channel that does not interact with the gas sample. The presence of VOCs shifts the left beam’s path relative to the right beam’s path, changing its relative phase. The exact phase change depends on the types of VOC in the peptide well, allowing the team to obtain information about the VOC’s chemical makeup.

Until now, this approach has mostly been used to detect compounds in biological liquids, although it has been demonstrated to work for gas samples containing one or two VOCs. By adding multiple sensors that quickly interact with VOCs before they have a chance to diffuse, Livache’s team now show that they can successfully identify and differentiate seven different odors at parts-per-million volume concentrations.

With the possibility of quickly and inexpensively detecting compounds in gases, Loic Laplatine from CEA-Leti says he’s “excited to see how these sensors can be applied to environmental problems, for instance, to reduce food spoilage and improve waste management.” Laplatine worked with Livache to develop the new sensor’s hardware.

Livache says that the production process of their sensors should be fully compatible with currently used low-cost mass-production techniques, which should make it relatively easy for companies to incorporate their sensors into existing technologies, such as automotive and consumer packaged goods. He also thinks that the device could be used to help people who have lost their sense of smell in a way that he says was “previously unfathomable.”

Rachel Berkowitz is a Corresponding Editor for Physics Magazine based in Vancouver, Canada.