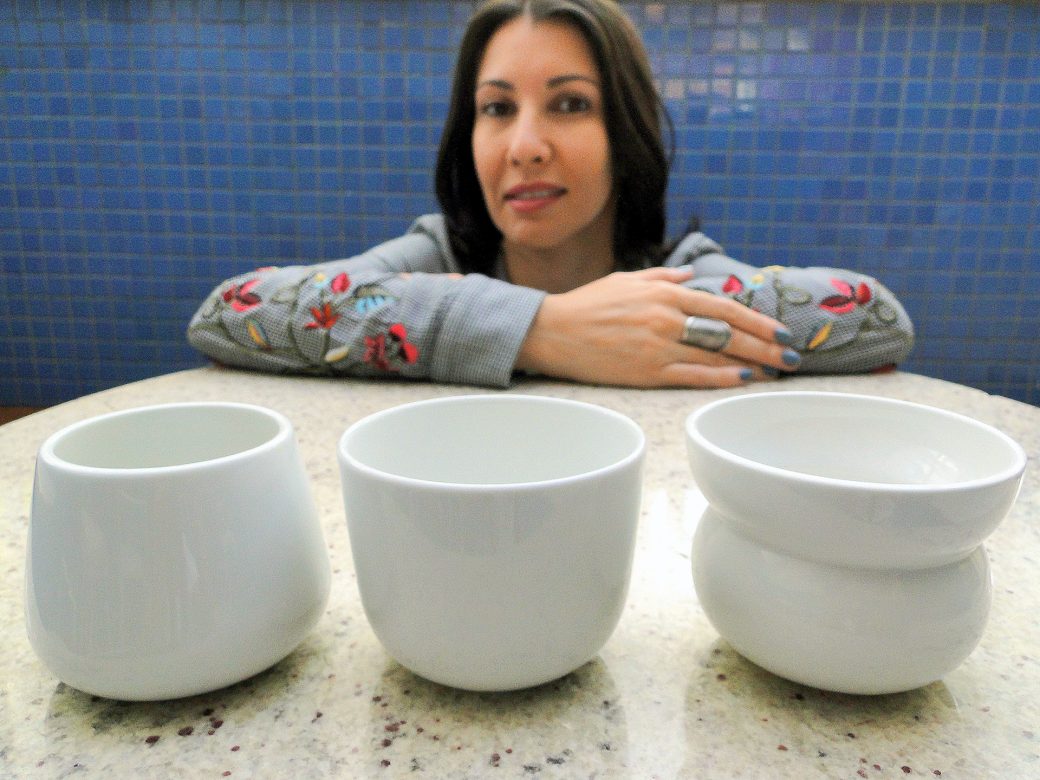 A Revolution Of Flavor Perception

The human brain is a remarkable thing. For example, did you know that the way we perceive food and drink is profoundly influenced by the environment around us? Or that the very essence of that perception occurs in a single moment, when multiple streams of perception simultaneously reach our brains? You’re never “just tasting” something—you’re tasting everything.

Many people tend to think flavor and taste are the same thing. But “taste” is only a concept, and it refers to the basic sensations—bitter, salty, sour, sweet, umami, and starchy—represented in the brain from the information gathered at our tongues. “Flavor”, on the other hand, is a far more complex combination of senses and processes, including touch, smell, taste, and vision. It’s a multisensory experience, and one of the most remarkable things we’re able to understand as humans—plus the science behind it is fascinating.

Fabiana Carvalho is the Brazilian post-doctorate researcher behind The Coffee Sensorium, a project that aims to bring knowledge on multisensory perception of flavor to the world of specialty coffee. A lot of multisensory research has been done on flavor perception of other drinks, such as wine and beer, and so it is already known that certain attributes of the container, such as shape, color, and weight, have a significant effect on flavor perception of chemically complex beverages. Carvalho’s project is investigating how these well-known effects apply to specialty coffee. Right now, she is expecting to be able to match a certain coffee container to the correct flavor profile—just as we already have different types of glasses that match the different types of wine or beer. 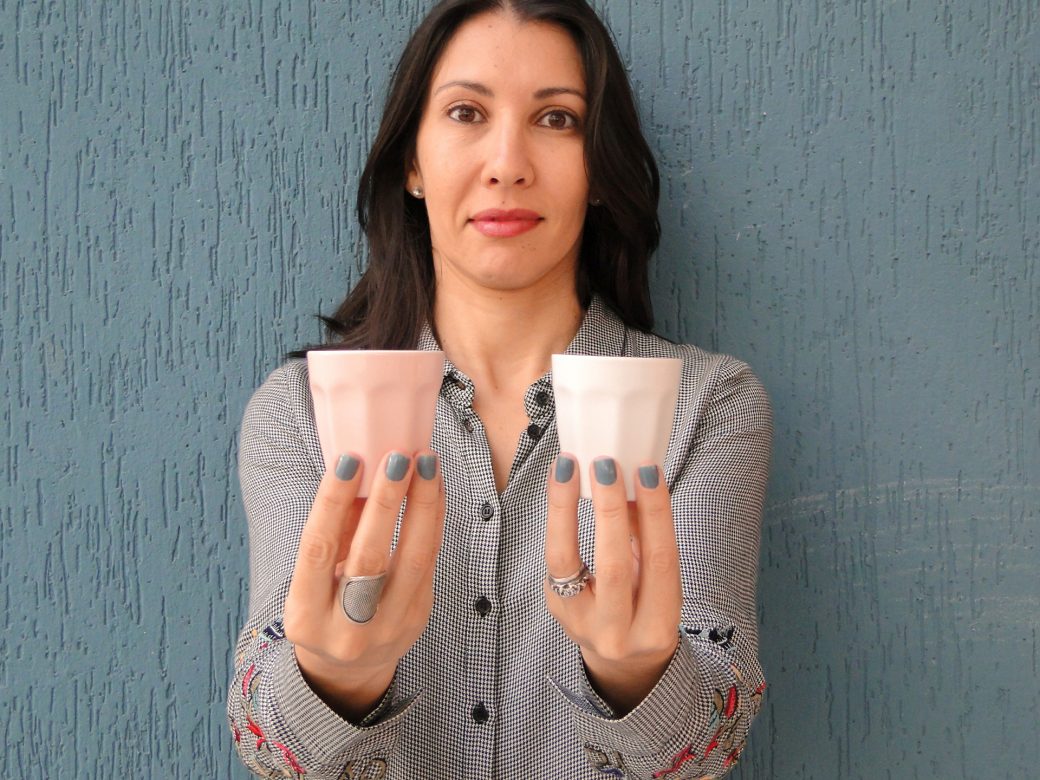 This is absolutely fascinating research, and in speaking with Fabiana Carvalho and dissecting her work, I was able to pull out a number of points that make for especially interesting reading. Here are a half-dozen of my favorite curious facts and findings from her research.

Smell is the major contributor of flavor. One of Carvalho’s most famous exercises involves asking her students to chew a candy with two fingers pressing on their noses. I tried it at a recent course, and it didn’t taste like anything I could recognize. Once she told us to release our fingers, the flavor immediately emerged: it was a very famous pineapple soft candy called “Balas Chitas” that any child in Brazil would recognize. It felt like my tongue was numb before, and just by releasing the nose the tongue got back to work. “If we go by numbers, it is said that between 75% and 95% of what people commonly describe as “taste” actually comes from the retronasal olfaction,” Carvalho tells me. People who have totally lost the sense of olfaction can no longer perceive flavors. They describe the food in their mouths only by the basic tastes and tactile attributes, such as “this is sweet and creamy,” but they could not tell apart honey from custard or Nutella.

Vision has a remarkable impact on flavor perception. It’s often the first contact we have with what we eat or drink. We see it, then we approach it to our mouths, and so visual cues can trigger a great deal of flavor expectation. Carvalho mentions a study described by Wheatley (1973)1 in which a group of people were having steak, fries, and peas in a room with color-masking lighting. At some point during the meal, the lighting was changed and the color of the food was revealed—but the steak had been colored blue, the fries green, and the peas red. Many of the guests felt nauseated simply by looking at the unexpectedly colored foods. And it’s not only about the color—everything from the color of tableware to the color of the environment greatly impacts flavor perception. Back in the 1950s it already was observed that a yellower can of 7-Up induced consumers to rate the drink as more lemony.2

Coffee packaging colors can influence how consumers predict the beverage. According to Carvalho, there are studies on the association between the color of the coffee package and flavor expectation. Usually, the colors brown and red are associated with strength and richness, blue with mild aroma or decaf coffee, and yellow with a weaker blend. Carvalho adds though that there is still a long way to go regarding a more thorough understanding of the impact of color on perception of flavor of specialty coffee.

Ultimately, the rounder the cup, the sweeter the coffee. The cup shape affects how we perceive coffee aroma, sweetness, and acidity. Carvalho conducted a large sample experiment during the Brazilian Coffee Week last year. It was the first study ever to investigate the effect of the cup on specialty coffee flavour perception. It was done in collaboration with noted Norwegian coffee professional Tim Wendelboe, who developed the three cup shapes tested–tulip, open, or split.3

As expected (per the wine literature), the tulip-shaped cup increased the perception of aroma. Sweetness received the highest scores in the split cup, followed by the tulip cup. This finding was also expected given the very consistent crossmodal association between sweet tastes and round shapes. The only significant difference between coffee amateurs and experts was regarding the “liking” scores. Curiously, despite the enhanced sweetness and acidity, the split cup received the lowest liking scores from the amateurs—but not from the experts. Since the split cup does not match any of the participants’ everyday drinking vessels, including vessels for drinking coffee, the atypicality of the cup may have negatively affected their drinking experience. Several studies show that high levels of design novelty can indeed lead to decreased liking evaluation. On the other hand, experts are used to cupping coffee from vessels of varying shapes, and were perhaps less influenced by the atypicality of the cup shape.

The color pink is strongly associated to sweetness. Carvalho is currently carrying out her second multisensory study on specialty coffee. She is now testing whether the color of the cup affects the expectation and the actual perception of taste in espresso coffee. She has started by testing real customers in coffee shops during working hours, and is planning to replicate the experiment in a traditional testing room in which contextual information (visual, auditory, and olfactory) is highly controlled.

Culture and past experiences can influence flavor perception. Cultural expectations towards some foods can surely affect how we perceive such foods. Think of the Western aversion to the idea of eating insects, while in some Eastern countries they are a common staple. Also, past events in your life can affect how you perceive foods or drinks in your adult life. If you had a bad experience while eating something, say, as a child, chances are you are not going to like it in your adult life.

In addition, some crossmodal associations such as round/sweet and black/bitter seem to be invariant across cultures, whereas other associations are dependent upon cultural background, such as the taste triggered by the color blue.

Carvalho’s preliminary test results will be validated in a controlled test lab. Still, these findings prove it is vital to assess multisensory flavour perception in real-world settings. Billions of dollars are spent annually on failed product launches in the Food and Beverage industry, and one factor that contributes to this failure is the inability to reliably predict consumer decisions (which includes sensory judgements) in real consuming environments. The information gathered will be certainly useful for roasters defining roasting approaches in a certain demography and also for coffee shop owners when deciding what drinkware to serve their drinks on.

All Photos by Fernanda Nunes.

1. WHEATLEY, J. 1973. Putting color into marketing. Marketing. Oct. 26-29, 67.
2. CHESKIN, L. 1957. How to Predict What People Will Buy, Liveright, New York, NY.
3. In the study, the same coffee (a pulped natural yellow Bourbon) was served to nearly 300 participants including specialty coffee experts and amateurs. They were divided into three groups according to the shape of the cup from which the coffee was tasted. So, each participant only tasted the coffee from one cup shape.
4. So far, 92 customers at Ancora Coffee House, in Minas Gerais state, and 82 customers at Takkø Café, in São Paulo were tested. Each shop served its own espresso beans—a natural red Catuai at Âncora, and natural (fermented) Acaiá Cerrado at Takkø. The customers were divided into two groups according to the color of the cup from which the espresso was tasted. Again, each person only tasted the coffee from one cup color—either pink or white.

Source: The Coffee Sensorium By Fabiana Carvalho: A Revolution Of Flavor Perception

You can dress up greed, but you can’t stop the stench.