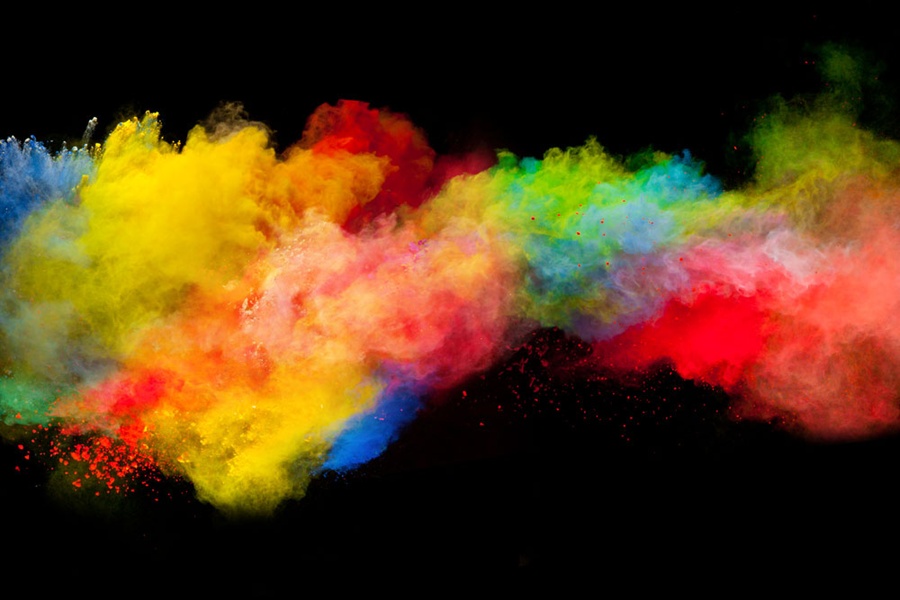 1. For centuries, academics thought colored light was modified white, or “pure,” light. (We’ll get back to how wrong they were in a bit.)

2. And color sometimes is a modifier. For example, coloring foods goes back at least 3,500 years, when ancient Egyptians added wine and other colorants to candy to increase its visual appeal.

3. The history of coloring food is stained with nefarious deeds. Toxic lead- and mercury-based compounds were once pervasive in Asia and Europe to add color to tea and cayenne and curry powders.

4. In the mid-18th century, Americans were so used to yellow milk, tinted with lead chromate to disguise the bluishness of watered-down dairy, that people refused to purchase white milk, thinking it had been colored.

5. They weren’t entirely wrong. In the 1660s, Isaac Newton demonstrated white light is anything but pure: It’s composed of all colors of light combined.

6. Scientists refer to color in terms of wavelength, a characteristic of electromagnetic radiation, but there is no universal match of specific wavelength values to specific color names. Encyclopaedia Britannica, for example, defines blue light as having a wavelength of 450 nanometers, but the average person might call anything between 425 nanometers and 490 nanometers “blue.”

7. And that’s just in English. Other languages, including many tribal African tongues, describe green and blue as different shades of the same color.

8. In Russian, light and dark blue are distinct colors, rather than different shades of the same color.

9. Regardless of language, our biology is the same. Human eyes have evolved trichromatic vision: We only see red, green and blue. Full perception happens in the brain. If your eyes see lots of red and green, but not much blue, your brain decides you’re seeing yellow.

10. Any color where the amount of red, green and blue appear equal will seem gray to humans.

11. This, of course, assumes color vision. Red-green colorblindness occurs when red or green color receptors are missing or mutated, primarily in people with XY chromosomes.

12. In XX-chromosome individuals, however, the same mutated color receptors may provide what’s called four-color vision, though researchers disagree on tetrachromacy’s characteristics and prevalence.

13. In 2010, 62 years after the first suggestion of human tetrachromacy, a study identified a woman with distinctly enhanced vision. She was picked for the test because two of her three sons had reduced sensitivity to green, suggesting she had the mutation.

14. No matter how many we can see, all colors result from interaction between light and electrons. Figuring out what type of interaction is responsible for each color can be a challenge, however, since there are 15 different mechanisms.

16. And wings of the Morpho butterfly appear as different shades of blue or even violet depending on how the light hits them. This effect is typical with light-scattering structures like the tiny scales that cover the insect’s wings.

17. In 2015, researchers found that the wings of the dragonfly Zenithoptera lanei, though similar in appearance to Morpho wings, get their color from waxy crystals that cover layers of the pigment melanin.

18. This effect, called structural color, has also been found in chameleons that can “tune” nanocrystals in their skin to change color the way tuning a guitar changes its pitch, as reported in 2015 in Nature Communications. The lizards tune up for camouflage as well as mating displays and possibly thermal regulation.

19. Color can also change during chemical reactions. When the hemoglobin in red blood cells loses oxygen, it takes on a bluish tint. But “blue blood” is a myth: Blood flowing through our bodies is dark red due to a mix of hemoglobin with different levels of oxygen.

Music is the art of the prophets and the gift of God.