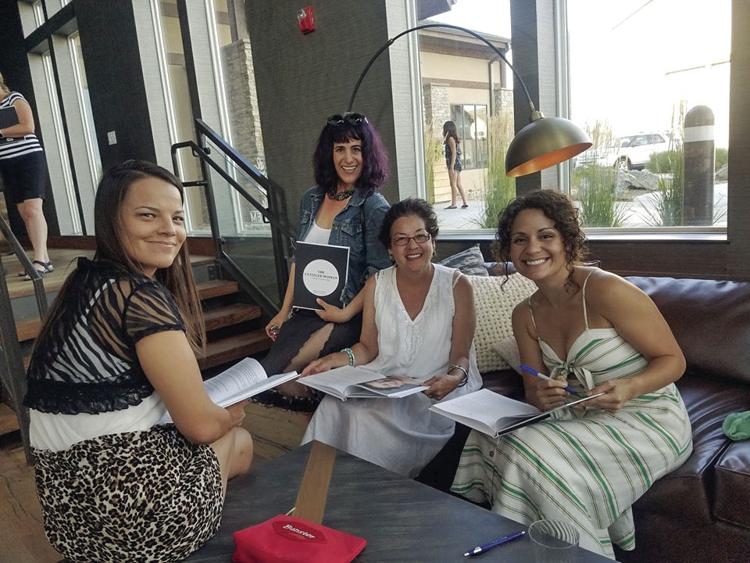 When scent is absent — living with congenital anosmia | News | lhvc.com

Dia Kline (second from left) visits with her co-subjects at the launch party for the “The Untitled Woman,” held last month in Denver.

Dia Kline has known since age four that she experiences the world differently than most people do, but it wasn’t until her mid-30s that the Niwot writer and comedian had a formal diagnosis for her lifelong inability to smell—a condition so rare that even a veteran otolaryngologist didn’t believe what he was seeing.

“He looked at me like I was a unicorn or the chupacabra—like some magical, mythical being that is sitting in his office,” she recalled. “He told me ‘I’ve done this for 35 years, and I’ve never seen a congenital anosmic. You don’t exist’.”

That may be true of chupacabra and its cryptid friends, but congenital anosmia definitely exists and, while not a debilitating condition, it can be a misunderstood one. Recently, Kline shared an account of what life is like for people born without a sense of smell in “The Untitled Woman,” a newly published book that takes readers “through the journeys of 24 women and their true stories.”

“My essay is not written from the point of view of ‘less-than’ or ‘poor me’,” Kline said of her contribution to the project, which was spearheaded by Wendy Winterbourne, a Denver-based producer and talent manager. “It’s written from the point of view of ‘here’s a funny thing, and this is how I embrace it.’ It’s uplifting and humorous, and I think oftentimes our stories of differences and overcoming can be a little more melancholy.”

Dia Kline (left) and Wendy Winterbourn at the launch party for “The Untitled Woman.”

Kline’s life with congenital anosmia is far from melancholy, but it does have its trials. Her condition is not just rare—estimates put its incidence in the general population at 1 in 10,000—it is also untreatable and largely invisible to others. There are no outward signs or symptoms to manage, no pain, and she doesn’t use a “smelling-nose dog.” Kline simply doesn’t notice the many scents and odors lurking all around us, often to the surprise and frustration of onlookers.

“That started a lifelong and incredibly unhelpful mantra of ‘just breathe in through your nose and smell’,” Kline said, recalling the time long ago when she told her disbelieving parents she couldn’t smell the pasta sauce simmering on the stove. “We don’t go up to blind people, and put an orange in front of their face, and say, ‘just open your eyes and look’.”

To be sure, there are real dangers associated with anosmia, most notably, the inability to detect “warning odors” such as smoke, gas, or spoiled food. Then, too, are the practical challenges of managing everyday household and personal odors, which can lead to awkward or embarrassing social encounters.

However, trying to convince others that she can’t smell what they’re smelling, no matter how pungent or pervasive, has long been the greatest source of exasperation for Kline. Even family members and longtime friends often trivialize or forget she has the condition.

“I’ve had people try to “stink me out”—overscent something or hide something to see if I would react,” she said. “Fumes can still make me sick, and that’s a very dangerous game.”

She also faces a lot of what she termed “mansplaining” about what she can and can’t taste. Though the two senses are complementary, taste buds aren’t impacted by congenital anosmia, and Kline has no complaints about how she experiences food.

“Recall the box of 96 Crayola crayons, with the sharpener on the back,” she said. “You were living large if you got that with your back-to-school supplies. That is a normal person’s sense of taste. Mine is like the 12-pack generic RoseArt. I have it, I use it, but I don’t get any olfactory help. A person with normal smell and I will eat the same stew, and I will comment on the larger notes of it, while they’re going to say ‘I love the rosemary in this’.”

Luckily, Kline has escaped many of the emotional and mental challenges experienced by other anosmics, particularly those with the acquired form of the condition. Accounting for 97 percent of all cases, this form is most often caused by sinonasal diseases or head trauma, and is potentially treatable with drugs or surgery. These anosmics often report symptoms of anhedonia (loss of pleasure), disordered eating, and social isolation due to their loss of smell.

“I am an anomaly,” Kline said. “I am one of the small percent of anosmics who are not depressed, who don’t get angry, and who aren’t offended. A lot of anosmics and a lot of congenital anosmics put an awful lot of energy and emphasis on sadness.”

While Kline doesn’t judge her fellow anosmics for this reaction, she has made a concerted effort to avoid the same path.

“Yes, it’s a disability, and it is life-threatening, and it is life-interruptive. It can take the joy away from life, but only if you let it. … It is a deficit, but it could be so much worse.”

“The Untitled Woman” was published in August and is available online at Barnes & Noble (https://bit.ly/2knXJ61). To learn more about Kline and her life with anosmia, visit her website ezjolife.comand follow her on Facebook (facebook.com/ezjolife), Instagram (@ezjolife), Twitter (@ezjolife), and YouTube. Last month, Kline was interviewed for an episode of The Smell Podcast, available at iTunes, Stitcher, Spotify, and many other more. On Oct. 26, she will be appearing at The RBJ Variety Show at La Vita Bella Cafe (471 Main St, Longmont)