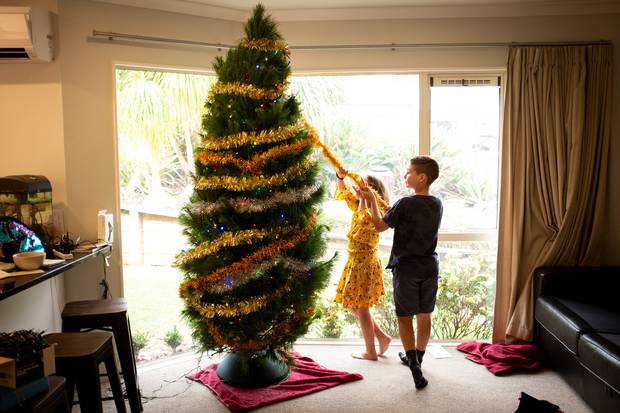 Santa Claus is doing his final checks of the naughty or nice list because Christmas is just around the corner – a little over a fortnight away.

But he’s not the only one working hard, with people all over the world preparing their homes in anticipation of the big man’s arrival.

And as everyone knows, a well-decorated tree is the focal point of any Christmas celebration – filled with cheerful ornaments, tinsel, and sparkly lights.

But what exactly makes a tree-mendous Christmas tree? Real or fake, tall or short, skinny or fat? The possibilities are endless.

To unravel the truth, NZME, the publisher of the Herald, employees were asked to fill out an unscientific silly-season survey and the expertise of a Christmas tree seller was sought.

The vast majority of responders voted for real trees, with the biggest tree turn-on being the scent of real trees.

Newstalk ZB’s Scarlet Svitanovich always fell victim to a fresh pine tree, saying “I most prefer the scent, walking into the house and it smells like Christmas.”

“We paid $100 for a monster tree from Shore Rd, Parnell, outside the Parnell Cricket Club … It’s bigger, bushier cousin sold for $350!”

Elsewhere, the Herald’s Edward Rooney said nothing comes close to the smell of a real pinus radiata, otherwise known as a Monterey pine.

And every year, no matter what, they get one “as tall as the ceiling allows – and without giving the angel at the top a cricked neck.

“I dislike the bugs that sometimes hitch along, one year we had steely black spiders which marched through the house like colonists.”

Elsewhere, Kem Ormond of the Hawke’s Bay Today had a fake tree with decorations collected from all around the world she would use.

To duplicate the smell of a real tree, Ormond would cut a few branches from her shelterbelt and make a table arrangement or wreath.

Growing up, her family always had real trees but Ormond found them far too strenuous, with pine-needles falling thick and fast.

“When Christmas is over I just pack up the tree ready for the following year … no mess, no fuss,” she said. “[It’s] so much easier with an artificial one.”

“You get pine needles falling off but it’s mostly a few. It’s not like they shed as such.”

People looking to buy Christmas trees should be careful about the type of tree they choose, he said.

“Really, the most important thing is one that’ll fit inside their house. Trees come in all sizes but buy something that makes sense.”

Dawe was one of the Christmas tree farm’s owners and said people living in apartments in nearby Hobsonville Point had been opting for smaller ones.

Meanwhile, there was still the odd customer living in large, old villas who wanted humungous trees they could erect in their homes.

People who bought trees should remember to keep them hydrated, as the pine trees were reliant on water to stay alive, he said.

When it came to the end of Christmas, Rooney would take his real tree out back and hack away at it before the pieces of the tree were small enough to fit in the compost.

“Hot work in the first week of January,” he explained. “And a tight squeeze amongst all the leftover salads and lawn clippings.”

It was a similar story for Cvitvanovich, who would “mourn” the tree before cutting it into small pieces and putting them in the bin.