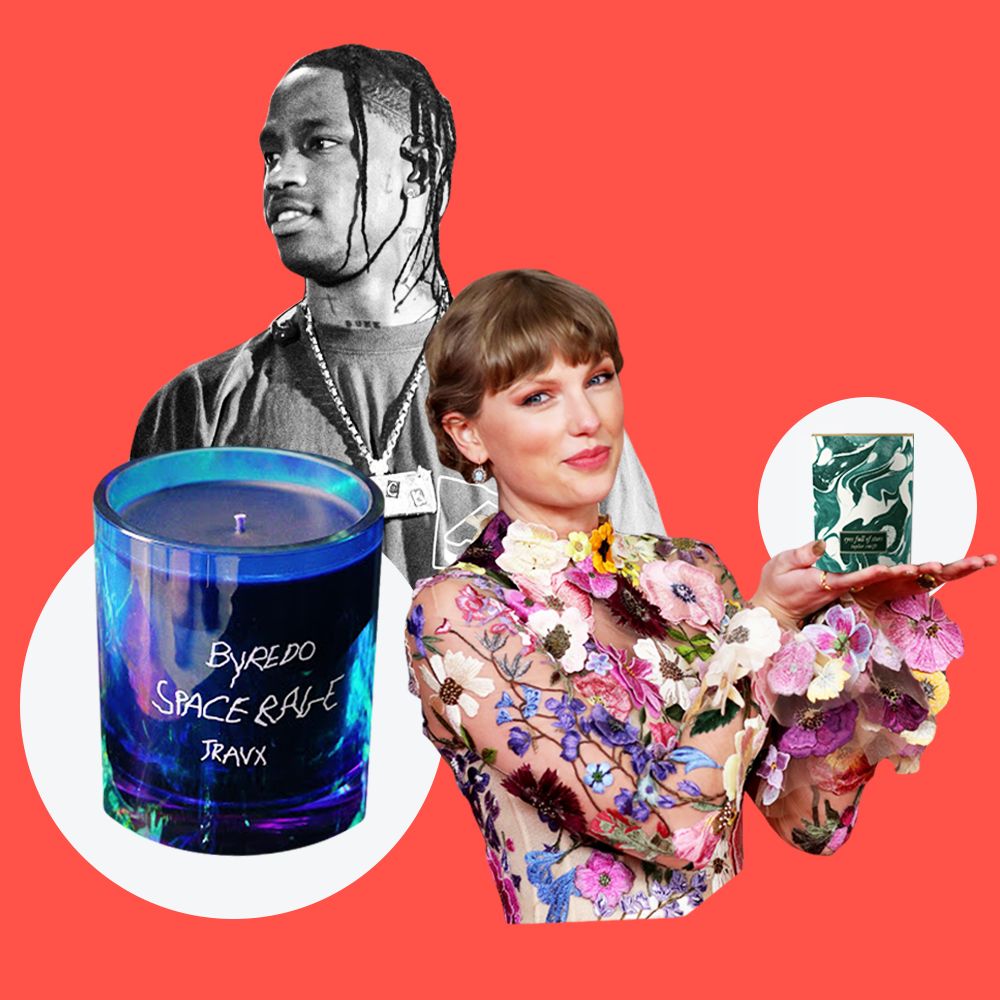 Want to Smell Like Travis Scott and Taylor Swift? There’s a Candle for That | Esquire

Sonically, there’s not much that links Taylor Swift, Travis Scott and Einar Selvik of Norwegian band Wardruna. But whether your tastes tend towards pop, trap or Viking folk, you can now complete your listening experience by sparking up a candle that smells like your favourite musician.

They’re following a surprisingly well-trodden path of fragrant merch, which was kickstarted by in 2013 by Icelandic band Sigur Ros, who released the Varðeldur candle, named for a track on their album Valtari and smelling of “the smoky, slightly briny smell of a flotsam campfire on a distant black beach under a wan midnight sun.” In 2017, Norwegian singer-songwriter Sondre Lerche tasked candle brand WAXBBY with capturing the scent of “grandfather’s burnt-down cabin”, which was successful enough to inspire a follow-up – the blood orange and blue spruce-scented Holiday Patience candle – to tie in with the release of 2020’s Patience LP.

From these heady Nordic heights the form soon plummeted – in 2018, Poison frontman Bret Michaels launched an uninspiring range that reeked of gingerbread, pumpkin spice and Morning Brew. Then, in 2019, the Florida-based Evoke Candle Co raised the bar ever so slightly with a range of limited-edition, officially licensed Saxon “Denim & Leather” candle sets; with notes of cashmere/vanilla and white sandalwood/smoke respectively. Last year, Evoke expanded its range with an official Motorhead “Ace of Spades” candle, which offered notes of smoked whiskey, oak and tonka bean, for those who enjoy that Lemmy-was-here scent in their living room. Later that year, Taylor Swift charted a more tasteful but equally song-inspired course with “eyes full of stars”, an oak moss and forest-scented candle inspired by a lyric on Evermore’s “cowboy like me”.

At around the same time, however, the music-candle game changed completely when American trapper Travis Scott (AKA Cactus Jack) surprised the world with an unexpected collaboration with Swedish luxury fragrance brand Byredo. Priced at $95, and smelling “literally like space”, according to founder Ben Gorham, the candle and paired fragrance (which went for $285) sold out in hours. As befits the artist behind perhaps the most-hyped sneaker of the last few years, the Travis Scott Jordan 1, the candles swiftly reappeared on reselling sites like StockX.

Alongside trainers, Travis Scott has put his name on everything from McDonald’s meals to breakfast cereal seltzer water, and despite savage ratings on TrustPilot, seems to be an unstoppable juggernaut in the merchandising market. So, what could possibly have inspired an exclusive, luxury brand like Byredo to join forces with an artist who’s taken selling-out to new extremes? Well, apparently the two are buds, and according to Gorham it was “a collaboration in the truest sense”. The unlikely pals wanted to create a tangible, accessible experience that captured the scent of the cosmos, or perhaps what they imagined space to smell like (Top: Cosmic dust, Antimatter particles; Heart: Starlight, The scent of Supernova; Base: Atmospheric vapour, Dark nebulae). Reviewers described it as “surprisingly fruity”.

In January this year, another bespoke-scented luxury candle appeared on the market, this time in the online shop of Norwegian collective Wardruna. Almost selling out within days of the launch, the candle was created to celebrate the release of their latest album, Kvitravn. Band member Lindy Fay Hella collaborated with co-founder of 2204 Candles, Simon Gallacher, to create a smell that would take her back to the long, forested path between her home and the ocean, where the salty scent of the water mingles with forest fragrances of moss and juniper. Hella always tours with various perfume samples and essential oils, finding that they help her to mentally prepare before a show and relax afterwards. When it came to developing the signature fragrance, they knew it should have a fine balance of sharp, cold Norwegian air in contrast with woody freshness.

“We used top notes of bergamot, lemon and white mint to open up a in a burst of freshness,” says Gallacher, “controlled with mid notes of clove and thyme, building on a base of pine, cedar and sandalwood, thus giving the true experience of the Norwegian Forest.”

The scented candle’s transition from hippies to housewives to music merch is a smoother one than you might imagine. Before Gallacher tattooed his hands and threw himself in to the candle-making business, he worked in music production for artists including Stormzy, Slayer and 50 Cent, and he recalls that “every production office always has candles or diffusers to set the right mood, especially on some of the more stressful days that touring can bring.” But even off the road, in quiet moments at home, the aromatic alchemist had always used scent to conjure up a sublime atmosphere, “I had a fantastic Dior Bois Brule candle I used to burn when listening to Mirror Reaper by Bell Witch and it truly enhanced the listening experience for me.”

The research backs that up. Smell is inextricably linked to memory and perception; our olfactory sense, being among the most primitive parts of our brain structure, has the most direct and powerful contact to the emotional regions of the brain, bypassing our logic centres altogether. When it comes to sight, sound, taste and touch, we perceive the information first and follow up with an emotional reaction. With smell, we respond emotionally before we’ve even identified what we’re smelling (think how the scent of baked bread can make you hungry before you’ve even notice it, or how smelling an ex-partner’s perfume can drag you back to your first kiss). It makes perfect sense, then, that scented candles are being used as a way for artists to connect more profoundly with their audience; for Gallacher, combining the senses to create the ultimate immersive experience “truly is the next stage in merchandise for artists.”

As recording revenues shrink, and with the pandemic pausing live shows (the only way a lot of artists make money), musicians have been forced to think even further beyond the screen-printed t-shirt for ways to connect with – and monetise – their audiences. But there’s a creative aspect to this as well. According to Jens Drinkwater from Global Merch Services (GMS), ideas are evolving well beyond traditional apparel, “especially in ways that tell a broader story of the artist as well”. That means looking for products that feel somehow connected to the world those artists represent, whether that’s black robes and bobble-heads for Swedish metal band Ghost or, as for Anthrax, whiskey and graphic novels.

Candles, then, offer a growing market, and not just the scented kind. GSM has partnered with Polish company Candellana to create officially licensed versions for bands like Iron Maiden, Behemoth and Mötley Crüe, which come shaped like everything from skulls and band logos to burning barns and stabbed heads.

How and why fans are drawn to candle merchandising is purely personal, and that’s exactly why it works. Some might use their candles to worship at the altar of rock n’ roll, others may wish to invite the warm glow of a flickering flame to soften the atmosphere, block out the distractions of life and bring their favourite artists closer. Whether you’re listening to Taylor, Travis or Trivium, there’s something devotional about candle light, the way it draws focus and creates a physical cocoon of light. By adding scent to the mix, artists can amplify the intimacy, creating a richer, more personal story that links artist and fan. And that story, like the memories conjured up by specific scents will be different for everyone: for Wardruna and Simon Gallacher, it means the calm of home; for Travis Scott and Ben Gorham, it means reaching out into the depths of the cosmos and taking a deep breath.

Source: Want to Smell Like Travis Scott and Taylor Swift? There’s a Candle for That