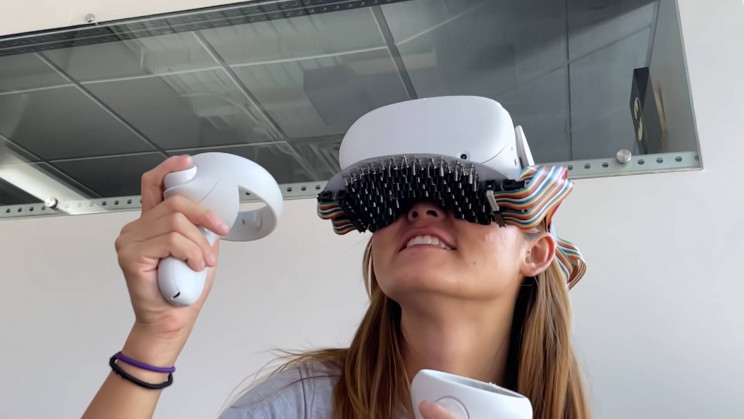 Virtual reality has come a long way in recent years, creating unreal environments and unprecedented tactile experiences. However, researchers have struggled to recreate an adequate simulation of our most precious senses of touch, like kissing.

Carnegie Mellon University’s Future Interfaces Group has tweaked an off-the-shelf virtual reality headset to recreate the sense of touch on a wearer’s face — specifically, a kiss on the mouth — without adding any parts that actually cover that area, according to a video released by the group last Wednesday. They achieved this by using ultrasonic transducers.

Making the most of ultrasonic transducers

“In this research, we built a thin, compact, beamforming array of ultrasonic transducers, which could be integrated into future headsets in a practical and consumer-friendly way,” wrote the researchers on their website, about the way they made the magic happen.

“We use this hardware to focus air-borne acoustic energy onto the lips and into the mouth, creating sensations such as taps and continuous vibrations, which we can also animate along arbitrary 3D paths,” the researchers continued. “In addition to the lips, our effects can be felt on the teeth and tongue. When coupled with coordinated graphical feedback, the effects are convincing, boosting realism and immersion.”

Although the most obvious application of such a device is kissing, the group notes that they built a variety of sensory demos, “including raindrops, mud splatter, pushing through cobwebs, and crawling bugs.” Basically, it seems that they have created simulations for nearly any sensation you can feel on your face.

This is nothing short of impressive, and the group notes that it’s a first-of-its-kind application. “While in-air haptics using ultrasonic phased arrays is not new, we are the first to integrate the technology into a headset for use on the mouth and explore the rich application space,” the researchers added on the website release.

The development is exciting, but it could be further engineered to offer full-body virtual reality sensations. That’s an incredible proposition, we know. Not to mention how cumbersome body-spanning VR devices might need to be, with today’s technology. Regardless, it would be terribly misguided to simply dismiss VR sensation technology — since the coming decades will probably see vast swathes of the human population “jacking in” to virtual reality devices, simply out of a need to experience things that life would not otherwise afford them — from a singular trip to the moon and Mars, to the infinite complexity of our long and ancient history. The possibilities are truly limitless.