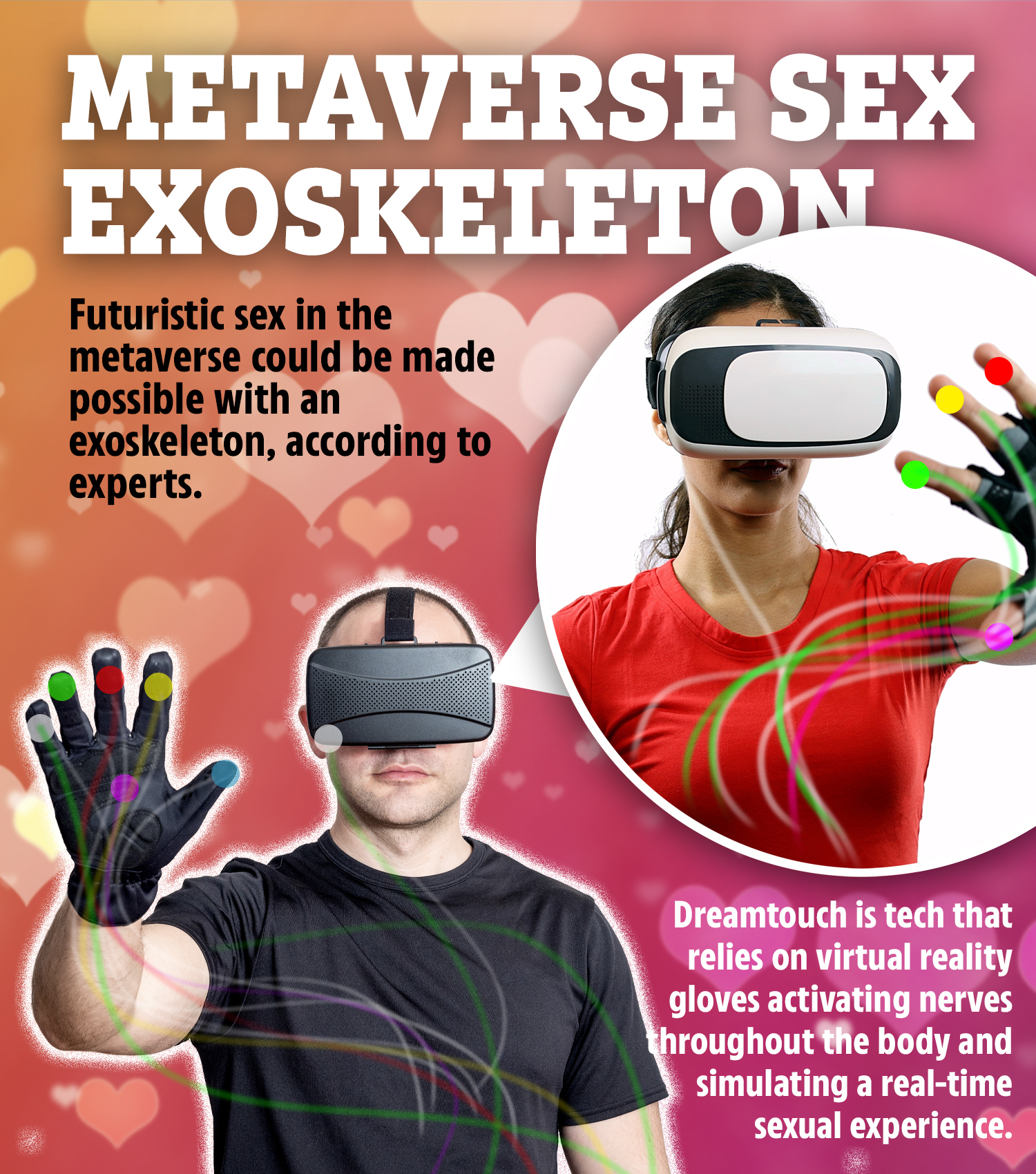 Virtual reality ‘exoskeleton’ will aid sex in the metaverse, expert reveals | The Sun

HUMANS may rely on exoskeletons to have realistic sex in the metaverse, one sex tech expert has revealed.

Dreamtouch is the name of an exoskeleton that Dreamcam is working on.

It’s predominately made up of smart gloves and a virtual reality headset that could give you a very realistic sensory experience.

Goldin told The Sun: “The exoskeleton connects to VR gloves that activate your sensory nerves through innovative, high-speed tech.

“This sends electrical signals across your body to give you a smooth, real-time experience, all in VR.

“This allows us to mimic the full body sexual experience than an in-person encounter provides.”

Goldin doesn’t think the exoskeleton would make metaverse sex feel exactly the same as it does in real life.

However, he doesn’t think this is a bad thing.

The sex tech expert explained: “It is different, but not in a bad way. I would argue from experience that it is just as good, if not better.

“While it may not provide the same feeling or emotions involved with body to body contact, we feel that using the ‘Dreamtouch’ technology will open up new avenues of sensation that have never been truly felt during real sex.”

Having virtual reality sex may sound like a futuristic concept but Goldin expects it will become normalized.

He told The Sun: “The metaverse is here to stay. It is quickly becoming a world where will we all work, play, and yes, date/have sex in.

“If we are really all in on the metaverse, all aspects of human behavior will translate into this virtual medium.

“The desire to have sex is a prominent part of human nature, and we expect that desire will translate as we integrate into a more virtual world.”

The exoskeleton isn’t as expensive as you may think.

He added: “I think this piece of equipment will be a necessity for all adults living in the metaverse.

“Sex plays a huge role in any society, and we have no reason to believe that this will be any different in the metaverse.

“Furthermore, we as humans are always looking to enhance our sexual experiences and technology is one of the major ways we have achieved this enhancement.”

What is the metaverse?

Metaverse is a broad term. It generally refers to shared virtual world environments which people can access via the internet.

The term can refer to digital spaces which are made more lifelike by the use of virtual reality (VR) or augmented reality (AR).

Some people also use the word metaverse to describe gaming worlds, in which users have a character that can walk around and interact with other players.

There is also a specific type of metaverse which uses blockchain technology.