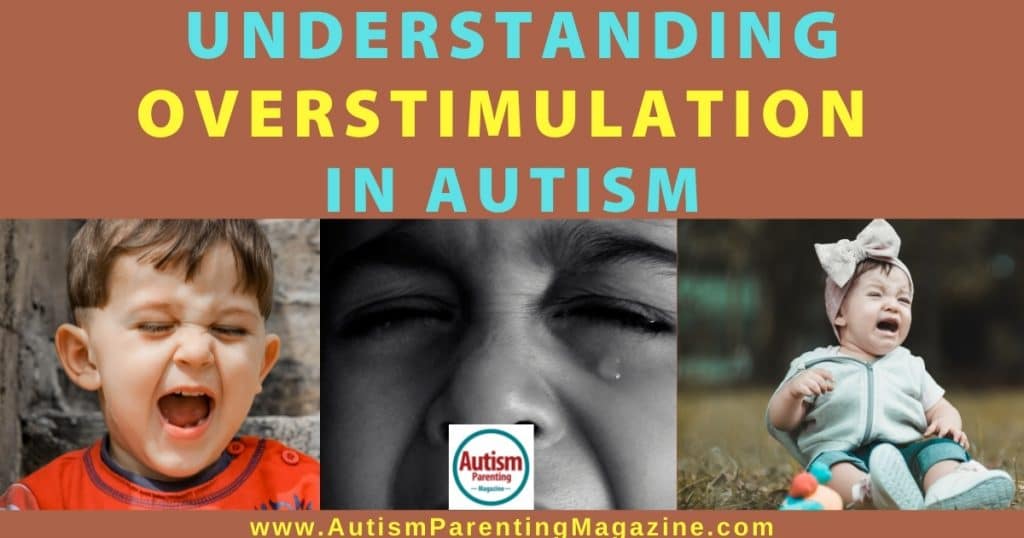 Most parents have witnessed a tantrum or two. A meltdown, or an autistic brain trying to control sensory overload with a challenged filtering system, cannot be equated to a tantrum.

A tantrum is usually about getting something: attention, candy or an extra video on the iPad. A meltdown is about regaining control or escape. When someone on the spectrum is overloaded with stimuli—and a sensory processing condition hampers the filtering of excess input—the only way to express and escape the overwhelm may be a complete shutdown or meltdown.

An area that is receiving increasing attention from researchers is the processing of sensory stimuli in autistic children. The fact that almost all children on the spectrum have some sort of sensory issue should be enough to encourage clinicians and researchers to determine the precise brain mechanics behind why autistic people find the world so overwhelming.

If society understood even a little about the hell of sensory overload, accommodations “to turn the world down a notch” would perhaps be commonplace. For parents who face many challenges in caring for an autistic child, interventions to make life a little less overstimulating may go a long way.

Although overstimulation is not unique to autism, it is something that most individuals on the spectrum experience on a daily basis. So what is the connection between the autistic brain and overstimulation?

Habituation may be key when discussing overstimulation in autism. As it pertains to learning and memory, habituation refers to a process whereby, when faced with repeated stimulus, a progressively tapered down response can be expected.

For example, when we wear a certain perfume regularly, we eventually stop smelling it as our brain basically starts equating it with our own body odour. Our senses, in this case our sense of smell, are regulated in a way that facilitates a watered down response to the familiar; so that we can pay attention to that which is important. If a poisonous gas was leaking in your house, your sense of smell should alert you to this novel stimuli, paying attention to the notes in your perfume worn for the last 10 years instead could be disastrous.

In neurotypical individuals, habituation is used to filter information and it is essential for selective attention. If children with autism have a weakened ability to maintain habituation, as the study above suggests, it follows that their brain may have deficits in filtering information and stimuli, leading to sensory overload.

Weakened or slower habituation in autistic children could contribute to overstimulation as they possess an atypical sensory filtering system. A typically developing child may get frightened and cry the first time he/she hears the vacuum cleaner, but through the process of habituation the sound becomes less scary, until eventually the child barely registers when mom is vacuuming in an adjacent room.

For a child on the spectrum, slower habituation may entail that the stimuli is not filtered out, as may be the case with the above neurotypical child. Instead the noise produced by the vacuum remains scary and the child will cry even after repeated exposure to the sound.

A study (Vivanti et al., 2018) investigated habituation profiles in both autism and Williams syndrome. The authors concluded that habituation is intact in Williams syndrome but deficient in autism spectrum disorder. Results from the study showed that both neurotypical children and those with Williams syndrome decreased attention paid to repeating stimulus as time progressed, but their response (or attention) increased to novel stimulus over time.

In contrast, those with autism showed a similar (attentional) response to repetitive and novel stimuli (Vivanti et al., 2018). So comparing autistic children to their neurotypical peers and expecting them to respond to sensory stimuli in the same way is unfair as their brain filtering may differ, and make this impossible. Another difference between a child on the spectrum and a neurotypical child may be the presence of a sensory processing disorder—in addition to a weakened habituation ability.

As mentioned above, slower habituation may be present in those with ASD, which may lead to overstimulation as repeated and novel stimuli are responded to (whereas neurotypical individuals may filter out familiar information). A mind in chaos, trying to respond to all stimuli may be further challenged if there are deficits in how sensory information is processed.

Studies estimate that over 90% of children with autism display atypical sensory behavior (Green et al., 2016). The Diagnostic and Statistical Manual of Mental Disorders (5th ed.; DSM–5; American Psychiatric Association, 2013) includes sensory issues as one of the restricted/repetitive behavior characteristics. The DSM-5 defines this feature as hypo or hyper reactivity to sensory stimuli or an unusual interest in any sensory part of the environment.

Autistic children may be very sensitive to sensory input and even neutral or positive stimuli may be overwhelming. They may also be hyposensitive, craving sensory input or displaying sensory seeking behaviors—like licking non-food items, crashing into furniture or spinning around for extensive periods of time.

If you picture the brain as a sensory processing device (much like a computer), one can almost imagine how the autistic brain may become overwhelmed and overstimulated with filtering challenges in addition to impaired processing. A child dealing with such biological deficits in an environment bursting with sensory overload could easily become overstimulated and a meltdown or shutdown may be the only way their brain can reboot or get back in control.

So telling or warning a child who is overstimulated and overwhelmed (or in the midst of a meltdown) to stop with difficult behaviors may be entirely useless. At that moment self-regulation, which is needed to control behavior, may be especially challenging or completely impossible as the child is probably in a state of sensory dysregulation, physical and psychological pain, and extreme emotional and mental distress.

Self-regulation may be another area where kids on the spectrum struggle; they may find regulation challenging in many areas but deficits in sensory regulation may be especially distressing. To regulate sensory input, the child should be able to block out irrelevant stimuli—which may be problematic when he/she has a sensory processing disorder.

If an autistic child is provided with tools to self-regulate it puts him/her in control of their environment. And once a child feels in control, he/she may become involved in identifying triggers leading to overstimulation and subsequent meltdowns. A child who can advocate for themselves can help parents to create a life where overstimulation and sensory overload are minimized.

While all this information goes some length to explaining why a child on the spectrum may feel overstimulated, parents may feel powerless when faced with such facts. If your child is wired in a way which makes the world a place of overwhelm, are parents supposed to stand by and offer silent support? Research actually suggests that parents can play a powerful role, by providing a stable and structured environment.

The study mentioned above (Favre et al., 2015) examined the impact of the child-rearing environment, taking into consideration the degree of predictability and enrichment, and investigated the impact of these factors on the development of autistic behaviors (in an animal model of autism). The study demonstrated a negative outcome resulting from unpredictable environments even when environmental enrichment was present.

In the study (Favre et al., 2015) the author shared the following: “If autistic children are indeed more neurobiologically sensitive to the environment than other children, then predictable environmental stimulation tailored to an individual’s specific hyper-sensitivity could significantly improve their quality of life, by preventing or ameliorating the debilitating autistic symptoms of sensory overload and anxiety.”

The first step to creating a stable, structured and predictable (or sensory neutral) environment for your autistic child is to determine what his/her sensory triggers are. It is very important to know in which areas the child is hypersensitive; and also where the child may need sensory input to compensate for hyposensitivity.

A great start may be to provide your child on the spectrum with a space where he/she can experience a sense of calm, or a place of refuge from sensory overload. A calming sensory bedroom space may be the perfect place for your child to retreat to when he/she is feeling overstimulated.

Your child is not being naughty when he/she has an oversized reaction to feeling overstimulated. Unfortunately parents not only bear the brunt of a meltdown, often they have to deal with criticism and people shaming them for something that is out of their (and their child’s!) control.

The good news is research is moving in a direction where sensory issues are being systematically examined and researched. This has enabled practical solutions to help parents tailor the environment of kids on the spectrum to help them feel calm and in control.

Moreover, society is realizing that those with sensory issues, and a propensity for overstimulation, have a right to inclusivity and accessibility. Organizations like KultureCity, aim to teach better ways to engage with those with specific sensory needs—for parents with kids on the spectrum there may be hope of a less overwhelming world.