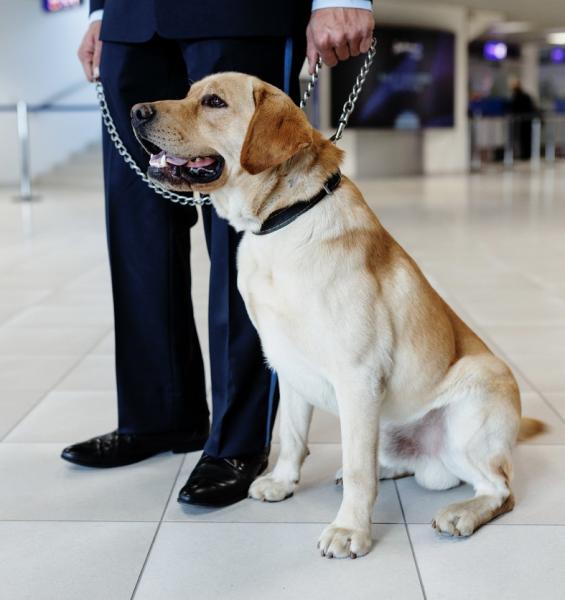 “Sniffer dogs” may be able to use their highly developed sense of smell to single out people infected with COVID-19, regardless of whether they have symptoms, according to a triple-blind randomized validation trial and real-life observations published yesterday in BMJ Global Health.

In spring 2020, a team led by University of Helsinki researchers trained four dogs by randomly presenting them with skin swabs from 420 parallel samples from 114 people infected with wild-type SARS-CoV-2 and 306 negative controls over seven sessions. Each dog had previously been trained to detect illegal drugs, dangerous goods, or cancer.

But the latter finding also illustrates how well dogs can distinguish between different scents, the team said. “This observation is remarkable as it proves the scent dogs’ robust discriminatory power,” they wrote.

“The obvious implication is that training samples should cover all epidemiologically relevant variants. Our preliminary observations suggest that dogs primed with one virus type can in a few hours be retrained to detect its variants.”

The dogs correctly identified 296 of 300 samples (99%) identified as negative by PCR but misidentified four positive cases as negative. Twenty-eight samples were from people with asymptomatic cases; only one of them was missed, and two weren’t sniffed, for an 89% accuracy rate.

In the airport setting, the dogs’ identifications matched those of PCR in 98.7% of the COVID-negative swabs. A low prevalence of SARS-CoV-2 at the airport (0.47%) didn’t allow a sensitivity analysis, but an ad hoc analysis using protein spike samples from 155 people who tested positive on PCR estimated a total accuracy of 98% (95% CI, 97% to 99%).

Role in screening many people

The researchers observed only small variations in the dogs’ abilities, with the best performance reaching 93% for sensitivity and 95% for specificity, and the worst achieving 88% and 90%, respectively.

Based on these results, the team calculated the proportion of true-positive and true-negative results in two hypothetical scenarios reflecting COVID-19 population prevalence of 40% and 1%.

The researchers said scent dogs may enable more efficient SARS-CoV-2 screening of large numbers of people in busy settings such as hospitals or ports, as well as detection of other pathogens in future pandemics.

Dogs can detect scents as low as one part per trillion, far beyond that of any available technology. While the exact mechanisms of this ability are unknown, the researchers said the dogs are thought to detect volatile organic compounds released during different metabolic processes, including bacterial, viral, and parasitic infections.

“I wouldn’t mind dying in a plane crash. It’d be a good way to go. I don’t want to die in my sleep, or of old age, or OD…I want to feel what it’s like. I want to taste it, hear it, smell it. Death is only going to happen to you once; I don’t want to miss it.”