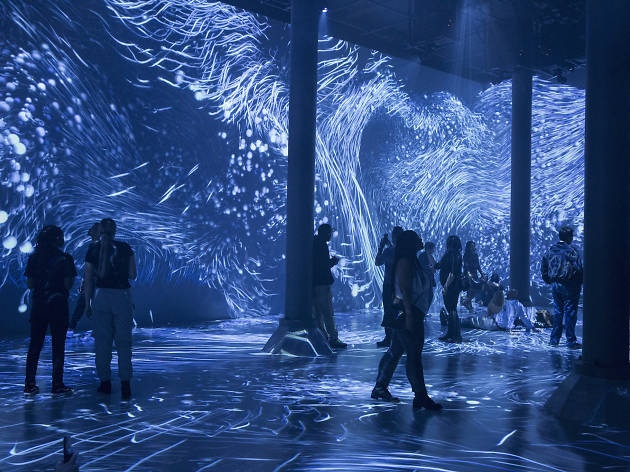 By msensory team10/02/2020No Comments
It’s February, the time of year when Seasonal Adjustment Disorder kicks into high gear along with the realization that winter isn’t going anywhere anytime soon. Feeling blue comes naturally when the weather is drab and you’re cooped up inside, but what if we told you that the color blue itself might be the key to lightening your mood? That’s one possible outcome from visiting Submerge, an immersive multimedia installation that allows you to get lost within a psychedelic environment of trippy, digital imagery set in saturated shades of deep, rich azure—more precisely, Pantone 19-4052 Classic Blue.

That also happens to be Pantone’s Color of The Year for 2020, the latest hue to be chosen annually as a predictor for the next big thing, chromatically speaking, in design and fashion. Submerge, which coincides with New York Fashion Week, is billed as a chance to experience 19-4052 Classic Blue (described as “a shade reminiscent of the sky at dusk” by the Pantone Color Institute) as a “multi-sensory exploration” in which you not only see color but “feel” it around you.

Submerge inaugurates the latest addition to the Chelsea gallery scene: ARTECHOUSE, which is opening a New York City location to join its other venues in Washington, D.C. and Miami Beach, FL. The space is located in the former boiler room of the Chelsea Market and includes an “augmented reality bar” serving “Submerge-inspired drinks.” The show will be on view until February 23; information about hours and admission can be found here.

Source: This new installation inside Chelsea Market immerses you in the color blue