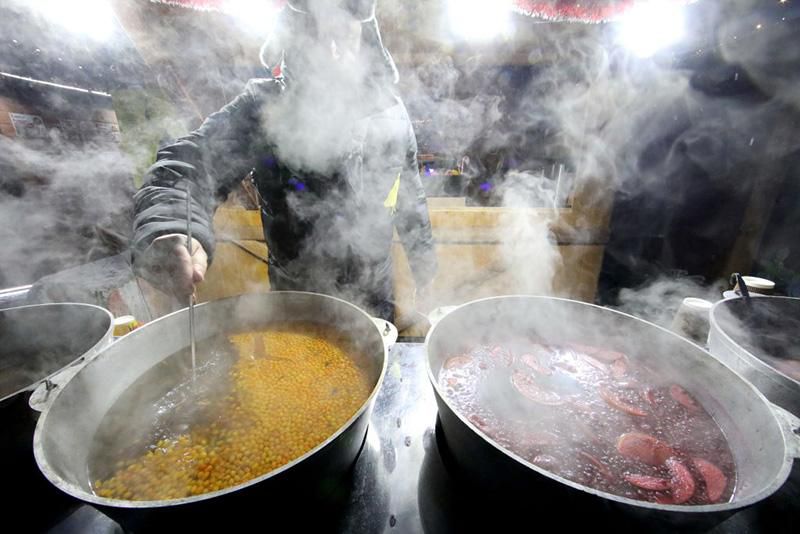 Nothing brings me right back to the holidays in South Jersey, where I grew up, like the scent of a bag of warm Philly soft pretzels: a fragrance that’s doughy and sweet, with a twinge of saltiness. It’s often mixed with a minty whiff of wintergreen Altoids and the crisp, flowery aroma of Dove body wash, a unique combination of scents that inevitably enfolds me when my dad greets me at Philadelphia International Airport most Decembers.

I’m not alone in my nostalgia: people associate innumerable smells with the holiday season around the world. Consider the scent of cloves and cinnamon rising from a steaming cup of mulled wine at one of Germany’s beloved Christmas markets, perhaps in Wiesbaden or Dresden, and the fresh fragrance of fir trees recently covered with snow in Lake Tahoe, California, and across Christmas tree lots throughout the U.S. There’s also the deep-frying goodness of Hanukkah’s citrusy scented sufganiyot doughnuts found at Israel’s open-air markets, or kitchens filled with the seaworthy smells of salt cod, shrimp and octopus all being baked, fried and sauteed for a Christmas Eve feast in Napoli.

But while many of us, including myself, will be trading our traditional holiday gatherings for Zoom parties and other online get-togethers this year, the seasonal scents that we find most comforting can still help us feel like we’re on the road, even when we’re not. Although olfaction, or the sense of smell, doesn’t literally transport us, it can help us tap into those cherished memories that we associate so dearly with the holiday season—especially when we combine our favorite scents with other sensory experiences.

“Our sense of smell of place is so tied to a specific context and environment, that when we catch something similar to it, we reconnect to that place where we first encountered those elements,” says olfactory artist Kate McLean, who leads public “smellwalks” through places like Staten Island and Pamplona, Spain, which she then translates into digitally designed maps. For example, a particularly warm December day coupled with the lingering scent of barbecue might bring you right back to that Christmas you spent in Sydney during college. Or a warm loaf of panettone bread fresh from the oven could call to mind Christmas Eve dinner with your nonna, who would come from Italy each year to celebrate the holidays with you and your family. “Really, it’s that combination of smell and environment,” says McLean, whether the latter comes from visual stimuli, like the falling of snow outside, or the feeling of coziness that comes from a warm kitchen, “that completes the association in your mind.”

The “Proust effect or phenomenon,” as it is called by psychiatrists and scientists, refers to how our senses can trigger an involuntary memory, much the way French writer Marcel Proust’s narrator in his masterwork Remembrance of Things Past found himself whisked away to childhood the moment he bit into a madeleine cookie. But, as Dmitry Rinberg, an associate professor at NYU Langone Health’s Neuroscience Institute who studies how olfactory information is represented in the brain, says, “The connection between smell and places is, in my opinion, still very anecdotal and without a real scientific basis.” What has been scientifically proven, says Rinberg, is the role that context plays in the perception of scent.

“Humans have innate predispositions for some odors. We almost all like the smell of roses and we don’t like the smell of trash,” says Rinberg. But because olfactory is so pliable, these predispositions can also be strongly modulated, he says, by our own experiences. Take the smell of Roquefort cheese, an overtly pungent blue cheese from southern France. “Most children would turn away at the smell of Roquefort,” he says, “but if I gave that cheese to you it might be a different story.” Rinberg says it’s because as adults, we’ve likely already experienced the cheese and have what can be considered a comforting association. Just the sight of it, or its creamy taste, helps us go beyond a smell that’s simply pleasant or unpleasant. “This is where multisensory experiences come in. It’s often much more difficult to place an odor without other cues,” he says. “For instance, if you have your eyes shut.” But when we see or taste Roquefort, it might bring us back to that meal we had in Paris on a January night, or an evening of tasting cheeses along the San Francisco waterfront.

This is one of the reasons that our sense of smell is seemingly on high-alert throughout the holidays, when scents are more episodic. This means that the scents occur at a certain time of day or year (unlike background smells, which are permanent), like the woodsy, refreshing scents of pine or douglas fir at a Christmas tree farm in late November, or the sweet smell of hot cocoa mingling with the scent of maple wood from a roaring fire on Christmas morning. In instances like these it’s not simply our olfactory bulbs that are kicking into high gear, but our other senses as well.

Still, once that association between scent and place is made, it can be easier to conjure. At least, that’s the idea behind Homesick Candles. Founded in 2016, this home fragrance and lifestyle brand taps into our general longing to recapture a specific moment or place in time. “This year in particular, our candles are helping to really take the edge off of missing home,” says Lauren Lamagna, the company’s director of product development. Their selection of hundreds of candle scents highlight the unique olfaction of all 50 U.S. states, various cities, countries like Canada, Mexico and Brazil, as well as a growing number of “memory” scents. “Holiday Stroll” smells of sugar plums, red currants and sandalwood, while “Latkes and Lights” has notes of baked apple, potato and sugar.

With so many travelers staying at home throughout most of 2020, Homesick Candles’ sales have more than doubled from last year, says Lamagna. In fact, one of their top sellers has been Hawaii, a candle that mixes the scents of pineapple, coconut and seashore, with sales up more than 450 percent from 2019. “I had no idea how many Hawaiian vacations were planned this year, and cancelled by the pandemic, until I took a deep dive into our reviews,” says Lamagna. Other Homesick Candle scents topping Christmas lists this holiday season include the United Kingdom, France and New York City.

Although the scent of a destination is purely subjective, Homesick tries to capture what Lamagna calls “the commonalities and experiences of each place, while also making sure that we’re hitting on those nuances that the locals love and that they’re going to resonate with.” Their research delves into the local flora, climate and foods of a place (for instance, the United Kingdom candle includes notes of grass, rain and toffee), and the company gets input through their social media channels and customer base.

Still, says olfactory artist Maki Ueda, it’s important to remember that the most authentic scent of a place depends entirely upon your own personal experience. Ueda, who uses a scientific approach to minimize other senses and focus on each smell’s “pure experiences,” stresses that while scents are often associated with a specific area, like the fragrant aroma of shell ginger in Okinawa, where Ueda resides, “we all have our own interpretations.”

One way to really remember those interpretations, and perhaps even revisit them in the future, says McLean, is to be consciously and actively aware while you’re experiencing them. To practice, she suggests taking a walk in your own town or city this holiday season and writing down three smells that you encounter: one that’s reassuring, another that’s entirely out of place, and a third that’s anything you like. Also, sniff, in the same way that a dog might; this method of smelling increases your air flow and doubles your chances of catching anything on the breeze. Once you do catch a whiff of something, try and visual it. “Did the smell come gently wafting by light clouds or is it something that hits you like a smack in the face, meaning it’s so powerful that it impacts a particular moment?” she says. “These are the kinds of questions you’ll want to ask yourself.”

If you’re going to try and recreate your favorite holiday memories through scent, McLean suggests limiting yourself to just one fragrance, like using cedar wood in a fireplace to create the scent of the outdoors in winter, or unwrapping that bar of handmade soap you purchased on a trip to Estonia. Then close your eyes and reimagine the rest. “Think about where you’d like to revisit in your mind,” says McLean, “and pick out a singular smell that reminds you of it.” From that, she says, you can create a multi-sensory experience by adding visual or audio cues, like a framed photo of your travels or a song you heard during that specific trip abroad.

For McLean, some of the most memorable scents, holiday or otherwise, are also the ones that are the most unexpected, like the time that she walked into a clothing store in Norway and was greeted with what smelled like bacon. Turns out the shop was also selling hot dog sausages inside. “It was completely unexpected,” she says, “but it’s things like this that become the markers which actually help differentiate that one particular experience from any other. That’s what makes it both special, and easier to recall.”