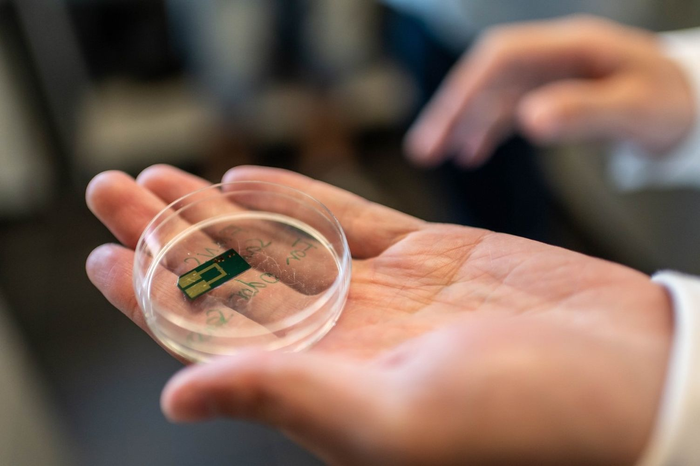 By msensory team28/04/2022No Comments
Smellodi Project.Antonie Bierling, TUD
In April 2022, an EU-funded project called “Smart Electronic Olfaction for Body Odor Diagnostics” – or SMELLODI for short – started with the objective of developing intelligent electronic sensor systems that can distinguish between healthy body odors and those altered by disease and transmit them digitally. Over a period of three years and with funding of almost 3 million euros, the technology was developed for the digitization of the sense of smell.

Electronic noses can also help people in everyday life, since body odors play a subtle but crucial role in many social situations. They influence our attraction to our partner, create a sense of belonging in the family, and allow us to draw conclusions about the feelings or illnesses of our fellow human beings. Therefore, the inability to perceive one’s own body odor and the body odor of others is described as one of the most serious impairments for people with olfactory disorders.

The technology envisioned in SMELLODI thus has the potential to become a rapid, immediate, and non-invasive diagnostic tool. With the advent of inexpensive, environmentally friendly, and biocompatible sensor systems, health monitoring of body odors can transform laborious or painful procedures that currently can only be used in facilities specialized for this purpose into a technology for individuals to use anywhere and anytime. An electronic olfactory device that responds to changes in body odor can be used to facilitate implants and assistive devices for patients with olfactory disorders and improve their quality of life.

In addition, there are many other applications for the technologies developed in SMELLODI. In the future, an electronic sense of smell could also shape the next-generation smart home (e.g., with refrigerators that monitor food quality), improve industrial processes (e.g., through the use of robots that detect malfunctions of production plants), and facilitate safety and environmental (e.g. by measuring ammonia in air) monitoring.

SMELLODI is one of two projects coordinated at TU Dresden that prevailed against major competition in the Horizon Europe EIC Pathfinder Open Call 2021 and will now be funded by the EU. At TU Dresden, the research group led by Prof. Gianaurelio Cuniberti from the Chair of Materials Science and Nanotechnology and the Interdisciplinary Center for Smell and Taste led by Prof. Thomas Hummel are involved in the project. The consortium also includes the Friedrich Schiller University of Jena, the Hebrew University of Jerusalem from Israel, the University of Tampere from Finland, and the Dresden-based startup SmartNanotubes Technologies GmbH.