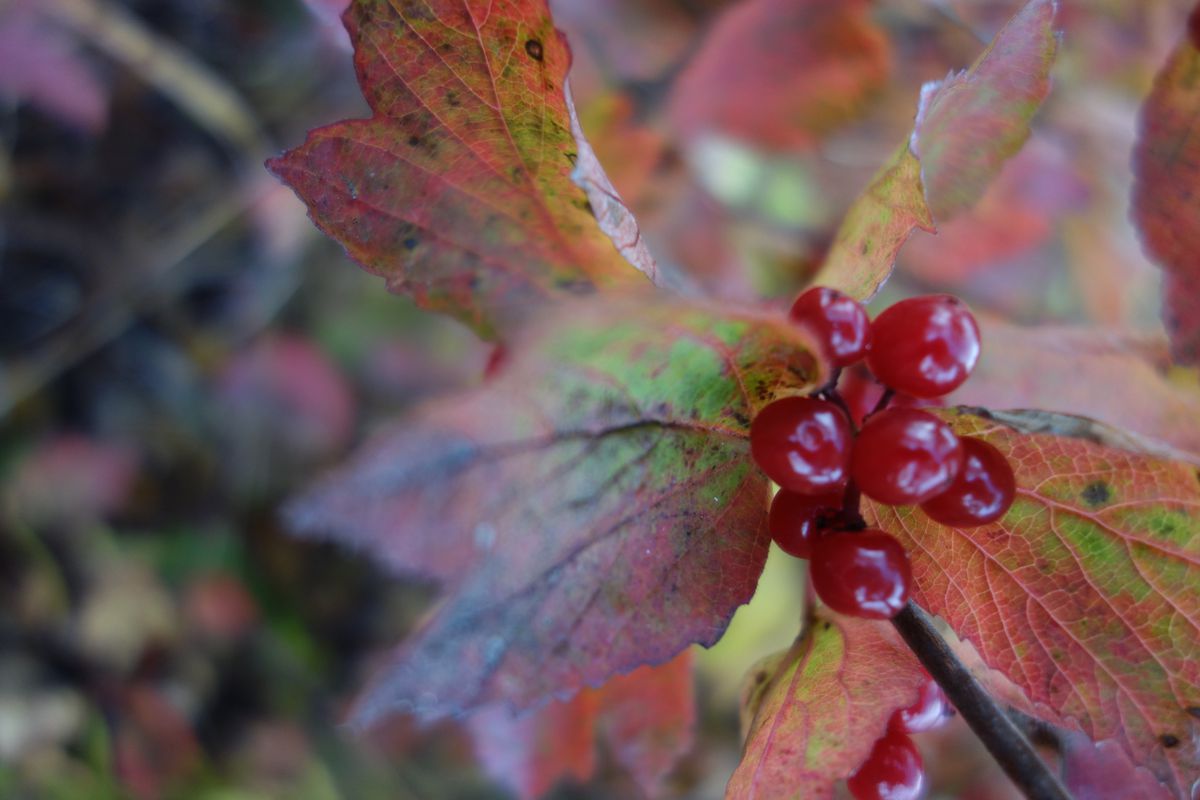 The scents, sights and sounds of fall equinox in Alaska | Anchorage Daily News

Highbush cranberry, which emits a musty smell in autumn. (Photo by Ned Rozell)

On the first day of October, a little girl pulls on her rubber boots and rushes outside into crisp fall air. She knows the days are getting shorter, but she doesn’t realize Alaska is a week past the autumnal equinox.

On the equinox, the sun appears to sit over Earth’s equator, causing days and nights to each last about 12 hours everywhere in the world. It is time for Alaskans to start paying the bill for all that summer daylight.

The girl hears the ground crunching under her feet. The temperature dropped to 27 degrees Fahrenheit the night before, killing many of the plants in her mother’s garden. The plants didn’t die on earlier nights when the temperature dipped to 32 because sugars within their sap depress the freezing point.

She walks to her favorite place, the frog pond, down a forest path. She is surrounded by the gold leaves of birch and willow trees. The trees are responding to cooler temperatures and longer nights by shutting down their solar panels by destroying chlorophyll. Packed within leaf cells, chlorophyll enables plants to convert the sun’s energy to sugars.

The trees’ shift to dormancy allows other pigments within the leaves to express themselves. It’s a brief show of color, lasting until the tree forms abscission layers at the base of leaves. After clipping their summer connection to branches, the leaves fall to the ground.

The girl notices perfect little spheres of water on the surface of a fallen aspen leaf. Water molecules tend to attract each other and trend toward the minimum possible surface area, which is a sphere. The balls of water will evaporate into water vapor as the day warms.

Beneath the girl’s boots, burrowed a few inches into the forest floor, are wood frogs, the only amphibians in northern Alaska. During the weeks ahead, a blanket of snow will protect frogs and other hibernators, such as yellowjackets and snow mosquitoes, from the cold air. Even close to the warmth of the earth, the frogs will freeze like little green ice cubes — a process that doesn’t kill them because their blood contains high levels of glucose, which acts as a sort of antifreeze. They will thaw and hop away the next spring.

Honks in the air draw the girl’s attention to the sky, which is clear and blue because air molecules in the atmosphere scatter blue light. Autumn skies in Alaska are a deeper blue than spring skies. Snow covering the ground in springtime reflects about 90 percent of the light that hits it. Air molecules scatter the reflected sunlight again, washing away a bit of the blue.

The little girl watches as Canada geese fly in a V formation, leaving the rich breeding grounds of the far north for warmer places. Scientists who once studied flying geese found that a flock of 25 birds in a V could fly 70% farther than a single bird using the same amount of energy. In a well-formed V, even the bird at the front receives a benefit from its neighbors.

As the girl turns to walk home, she catches the musky smell of fall wafting from highbush cranberries. The fragrance will remind her of home the rest of her life.

The scent — a chemical compound released as the fruit matures — may be intended to lure a creature to eat the tart berries, but the girl wrinkles her nose and walks past the bushes, back up the path to her house. She will not be a seed carrier for the highbush cranberry; it’s a task she leaves for the foxes and birds.

[Because of a high volume of comments requiring moderation, we are temporarily disabling comments on many of our articles so editors can focus on the coronavirus crisis and other coverage. We invite you to write a letter to the editor or reach out directly if you’d like to communicate with us about a particular article. Thanks.]