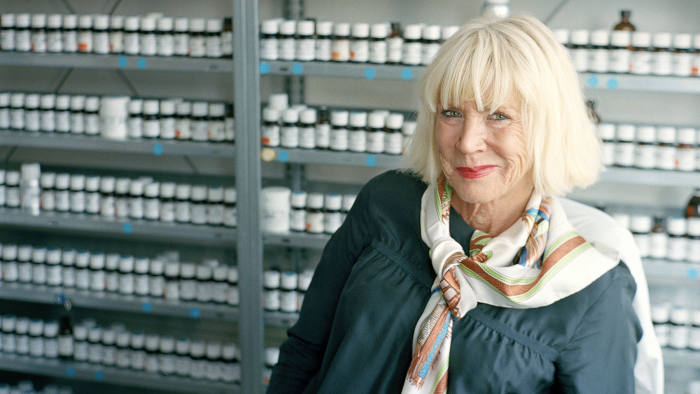 The olfactory artist is weaponising jewellery with malodorous smells

Can you weaponise a ring? This is what I’m wondering as I stand in the showroom of German jeweller Georg Hornemann, peering at (n)visible, a platinum ring held aloft on a Perspex rod. The ring is beautiful in the way a fighter jet or a predatory insect is beautiful. It looks as if it could detonate, or else unfurl into one of those lethal objects villains chuck at each other in martial arts films. Its weapon is not a steel blade, though, but something far subtler: scent. Twist its dome to reveal pierced panels and it emits one of three “functional smells”: Attraction, Distraction or Attention. Today, it’s giving off Attraction, which smells like a far-off, futuristic flower. “But actually this one is the smell every woman needs,” says Sissel Tolaas, the olfactory artist who conceived of the ring. She bends a tousled blonde head over a dish piled with beads the size of seed pearls. The functional smells are contained within the polymer these beads are made from. “We’ve called this one Distraction,” says Tolaas. “But what it’s really saying is, ‘Keep your distance’.” I sniff gingerly, expecting the olfactory equivalent of a gut punch. But the scent is pleasant, if a touch astringent. “The object is not to repel everybody around you,” explains Tolaas. “The point of the ring is to bring back smell as a tool of human communication, something animals use it for all the time. Distraction allows you to communicate something you may not want to verbalise: ‘Don’t come too close.’ The effect is subtle and, for the person smelling it, probably unconscious.” A ring that creates an invisible scent-shield around you has got to be the perfect accessory for the #MeToo generation. But it doesn’t come cheap. Created in collaboration with Hornemann (probably Germany’s most feted jeweller), (n)visible is a limited edition of six and costs a cool €20,000. It seems my means of communication will have to be limited to the verbal for the foreseeable future. 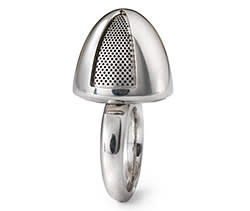 Functional smell rings are only the latest in a string of out-there projects from Tolaas. Hailing from Norway and basing her Smell Re_searchLab in Berlin, she describes herself as “a professional inbetweener”. Most who have heard of her, though, think of her as a pioneer of what is now one of the hottest artistic genres: olfactory art. “When I started out in the early 1990s, no one was doing anything with smells,” she recalls. Now there are exhibitions entirely devoted to the medium, while a young artist who specialises in odour, Anicka Yi, won the Guggenheim’s Hugo Boss Prize in 2016, a landmark moment. LA’s Institute of Art and Olfaction recently decamped to London for a two-day Experimental Scent Summit, billed as a “relaxed and conversational meeting of olfactory artists”. Smelly art is achingly hip. For Tolaas, the great thing about smells is that they bring you down to earth. “Disembodiment is the defining illness of our time,” she says. “We live so much of our lives through our devices. But smells can’t be experienced on screen. They put you right back into the body.” Kant dismissed smells from aesthetics for this very reason. They were considered too close to the body and its appetites to allow for disinterested judgment. Painting, sculpture, music, poetry; these could be art. The smell of human fear encapsulated in a gallery wall; this could not. “The Smell of Fear, the Fear of Smell”, a Tolaas installation in which visitors touch and smell a wall to experience the sweat of men diagnosed with extreme anxiety, was created for MIT in 2004 and has travelled the world since. It proved a hit last year at Tokyo’s Museum of Contemporary Art. Smelling sweat is one thing, making cheese with it is quite another. “Ah, the cheese project,” she says with a cheeky grin. “This grew out of a residency called Synthetic Aesthetics, run by Edinburgh and Stanford Universities, where scientists and artists make work together. My partner for the project was a synthetic biologist from Harvard. We were riffing about how human feet are described as cheesy — not without reason — and we thought, ‘Hey, how about using human skin bacteria to ferment cheeses?’ ”

Human skin bacteria live in our sweat. In fact it’s these bacteria that make our sweat smelly. Tolaas and her scientific partner, Christina Agapakis, started by collecting their own sweat and stirring it into milk. But soon they were asking a range of public figures to send in their sweaty skin flakes. “We would send out a lab kit with a scraper and re-sealable test tube. Everyone responded. Mark Zuckerberg sent us his armpit sweat. Olafur Eliasson sent us his tears. Hans Ulrich Obrist sent scrapings from his forehead.” The project culminated in a Limburger cheese made from David Beckham’s sweaty sneakers that was served to unsuspecting VIPs in the Adidas tent at the London Olympics. “David Beckham turned out to be one of the more delicious cheeses. The guests loved it.” Kant must be barfing in his grave. Other Tolaas investigations take a more poetic, even more disembodied turn. One long-term project in conjunction with the Max Planck Institute for Psycholinguistics is an attempt to create a vocabulary of smells, an area in which European languages at least are poor. “Mostly we describe smells by referring to other things, for example to the origins of the smells such as orange, apple, wood. We don’t have specific terms for smells as we do for colours: blue, green, pink.” Nasalo, her smell-lexicon, currently includes 2,500 words, many of them metaphors, or sounds gathered from people of different nationalities as they respond directly to an odour: “phwoarr”; “euch”; “mmm”. The Smell Memory Kit focuses on smell’s ability to rekindle memories with emotional intensity. It was easy enough for Proust to bring back lost memories of his childhood when he smelt and tasted a madeleine dipped in lime-blossom tea, because this was something he had smelt and tasted as a child. But what if you want to remember something that happened when you were an adult, by which time you have smelt more or less everything already? Tolaas’ answer is to exploit the thousands of lab-created odiferous compounds that lie unused on dusty shelves at IFF (International Flavors & Fragrances), the multinational fragrance manufacturers who support her research. “These molecules are non-referential; they don’t smell like anything you ever smelt before,” she says, “and so they are available for creating new memories.” The Smell Memory Kit contains three ampoules of just such an abstract smell. When an event happens that you want to remember, you break open an ampoule and inhale. Later, when you want to recall the event, you break one of the other ampoules containing the same molecule and the memory floods back with its original intensity. Forget hashtagging, this is smelltagging your life; or “capturing everlasting smell snapshots”, as Tolaas puts it. Whether or not you can actually programme yourself to remember something, the concept is compelling, and it has been lapped up by fashionable folk (designer Raf Simons bought a Smell Memory Kit for each of his staff for Christmas) and the kits are currently sold out. For Tolaas, the point is that the kit, like the functional smell rings, is about embodiment: “Instead of snapping your life away on your smartphone, it encourages you to contemplate the moment and consider if you should remember it.” There’s something infectious about Tolaas’ take on smells. “I always wanted to be an astronaut,” she says. “Instead I have become a nasalnaut.” And what on — or off — earth is that? “Once upon a time I interviewed one. He worked for Nasa and his job was going into the space shuttle and identifying molecules that might change in a zero-gravity situation. But to me, a nasalnaut is someone who navigates the world by smell. In my view, this is what will save us because it will teach us to think differently. We all need to become nasalnauts now.”