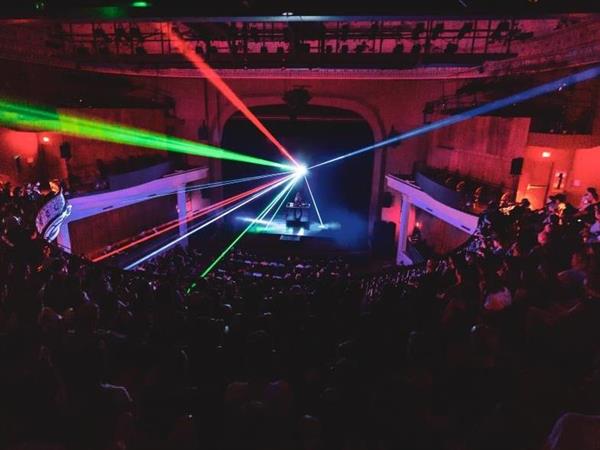 Described as ‘laser madness,’ Single Origin is the third in a series of works by the audio/visual artist that explores the laser and sound possibilities of mechanically induced synaesthesia – a joining of the senses where light may be heard and sound can be seen.

‘What I wanted to do with this show was to bring the two loves of mine together; the audio-visual shows that I was making with lasers, and the sound work that I was doing in the studio. So the idea with Single Origin is that it all comes from me, it’s like bringing all my interests into one place and putting it into this piece,’ Fox told ArtsHub.

Fox’s interest in the neurological condition of synaesthesia has inspired his works Monochroma, RGB and now Single Origin, the third in the series.

‘I’ve had an interest with synaesthesia since I’ve been very small because my mother had it, so she had an association between number, colour and pitch,’ said Fox. ‘So every time you had a birthday she would tell you what colour it was and what note it was. The fact that these senses are commingled wasn’t a foreign idea to me, but it’s not something that I had experienced myself.’

That was until Fox started using an oscilloscope, a lab instrument commonly used to display and analyse the waveform of electronic signals.

‘When I saw sound for the first time in an oscilloscope a lot of it looked not that interesting, but there was this one moment where it crystallised into this geometric correlation,’ he said.

‘It was a really satisfying neurological event in my life, even though it lasted a second and a half. But I felt like I’d experienced what I now call mechanically-induced synaesthesia. Like I had somehow managed to force my brain to connect sound and image together in a very fundamental way.’

But the images he saw on the oscilloscope didn’t translate properly on a projector because of resolution loss so he came up with a different idea.

‘I got a laser projector and I had it built for me so it would work like an oscilloscope and I could send voltage to the little mirrors inside the laser projector and just draw sounds basically with lasers,’ Fox said. ‘I thought, I can make people stand inside the sound now. Instead of just looking at it you could be standing inside it.’

Having already toured England, Europe, Canada and Mexico, Single Origin lands in Melbourne this week for two nights and forms part of Spectral: between light and sound, an audio-visual event featuring work by Hanna Chetwin, Kusum Normoyle and Jannah Quill.

‘Anyone should be able to walk in and say, “Holy Shit, that was something.”’

Spectral: between light and sound is on at Arts House from 17 – 18 April 2019. For more information visit Artshouse.com

Source: The magical way in which art can alter the senses

When I was a kid, we weren’t really supposed to listen to secular music. But one day, I found a ‘Led Zeppelin IV’ cassette tape in the garage, and it was just amazing-sounding music, not like anything I’d heard before. I remember thinking: ‘Well, if God created music, why is his music in church not as good as this?