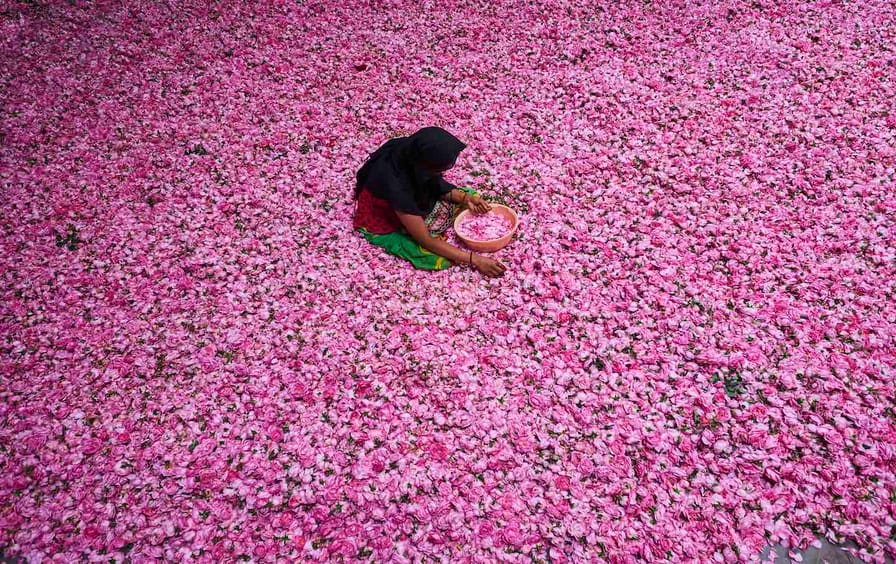 The Hidden Politics of Smell | The Nation

India, Uttar Pradesh, the city of perfumes where roses are distilled for the perfume industry. (Courtesy of Getty Images)

In Sensorium, a book by the perfumer Tanaïs, tells a deeply personal story of scent and the role it played in colonial histories.

When I was diagnosed with Covid-19 in December of 2020, scent was the first thing to go. I was quarantined in my bedroom, and the world without smells was sterile and lifeless. Their absence made me keenly aware of the ways in which scent enables us to understand our surroundings. Without smell, food—sweet, savory, rotten—lost meaning. The smell of water drying on skin after a shower—cleanliness—was completely gone. The smell of pine needles on the breeze from an open window—the outdoors—did not signify a season, only the cold. We lack many words to describe scent, resorting instead to concepts and comparisons, but perhaps that’s a result of the visceral connection scent offers to how we feel, our sense of place, the nuances that round out the objects we see, touch, or perceive.

IN SENSORIUM: NOTES FOR MY PEOPLE

My companion during that time was a small bottle of perfume I had bought a few months prior: Marigold, by the writer and perfumer Tanaïs. Floral notes like rose and carnation atop a base of sandalwood, musk, and saltwater felt deeply South Asian. Every day I’d spritz some onto my wrist, inhale deeply, and smell nothing. But months later, slowly with each passing day, those notes started to register, reconnecting me to the world around me and easing the fears that I’d never be able to appreciate smell again.

I was surprised to see Tanaïs’s latest book, In Sensorium, open with a similar story—of being stripped of their sense of smell after contracting Covid-19 and, in their case, not only experiencing the fear of losing everything this sense represents but, as a perfumer, also losing their livelihood. Despite our reliance on more tangible forms of perception, scent remains essential in its ability to give texture to everyday life, connecting us to our intuition. This sense, and the nuanced understanding it represents, is the through line of In Sensorium, a book that is part memoir, part history, and explores the silences of the past—Tanaïs’s own and recorded history’s—through the politics of scent.

In Sensorium is Tanaïs’s second book: Their previous work, a fictional exploration of Bangladeshi identity and coming of age into one’s sexuality set in Brooklyn, was local and intimate. Though it maintains the intimacy of Tanaïs’s writing, In Sensorium broadens the scope, venturing out to examine the histories of caste violence and gender in South Asia, the genocide in Bangladesh and the violent dawn of a nation, Tanaïs’s own coming of age and sexual exploration, as well as Islamophobia and identity in America and racism and capitalism in the contemporary perfuming industry. Tanaïs’s writing is not unlike a perfume itself—setting out histories and mythologies of the powerful as base notes, exploring the experiences of women and femmes in the heart notes, and creating fragrances as transportive mediums for pilgrimage and knowledge as the top notes.

Perfume becomes metaphor and material. It is both a structure and a subject, a medium for storytelling as well as an object with its own history and power. Perfume, for Tanaïs, serves as an alternative form of knowledge transmission, an older, more intuitive form, resisting Western obsessions with taxonomies, classification, and the written word, established by and to favor the powerful—the white, the men, the elite—of history.

Fragrance, however, is a tricky subject for a writer. We lack the exact language to describe scents, and across languages, olfaction is the sensation that we have the fewest words to depict.

In the way that scent slips through the grasp of language, Tanaïs’s work similarly eludes the boundaries of identity. “Tanaïs” itself is a portmanteau of their full name, Tanwi Nandini Islam, drawing on the Hindu, Buddhist, and Muslim traditions that flowed through their ancestors’ cultures and embracing them all without division. In its exploration of South Asia, In Sensorium dissolves the ethnic, national, and religious boundaries that often feel so intrinsically tied to our identities yet elide the interchanges we share across these taxonomies. What this book seeks to do, then, is create a new historiography, inhabiting a feminine and queer perspective that shifts storytelling toward the writers, artists, and communities who have found themselves erased by dominant national narratives and who can’t be contained by any border, real or imagined.

The writing is deeply personal—it’s not linear, and some moments feel almost like reading a diary in its intimacy. That is precisely the point: Thoroughly rooted in Tanaïs’s identity—as a South Asian, a femme, a queer, a person whose history was erased by dominant narratives—In Sensorium, subtitled “Notes for My People,” is aware of its audience, centering those narratives that have often been relegated to the margins of society.

Tanaïs’s research ranges across centuries and hemispheres. Early on, they write of coming across reports that the fragrance wafting from transatlantic ships was used to determine if the cargo was spices or bodies—of enslaved people. Small details like these lend themselves to broader explorations of the ways in which fragrance and scent have been political tools throughout history. The groundwork that Tanaïs lays—the lingering base notes upon which the rest of the book builds, which color everything else we are to experience—are what Tanaïs calls foundational “patramyths,” or the lies encoded in history to protect the powerful. Tanaïs explores how scent was used to solidify Brahminical caste supremacy, the ways it existed in the colonial imagination, and the repercussions of the colonial project and global capitalism on labor and the climate.

Across epochs and geographies, scent has demarcated purity, caste, gender, and other forms of power. Medieval Indian texts, for example, describe choya nakh, a sea shell, as the scent of a “loose woman,” associating it with sex work, while sweeter ingredients like sandalwood and jasmine were exclusively reserved for the upper caste. Malodorous smells like garlic, onion, fish, blood, and shit defined the sensorial landscape of the lower castes. Early modern Europeans, under the influence of miasmatic theory and fearing the noxious potential of foul odors, appropriated the use of scented resins like frankincense and myrrh—today inextricable from the scented landscape of the Christian clergy—from African traders who originated the commerce in these fragrances. Just as Europeans enslaved and dehumanized African people, Tanaïs writes, “whiteness claimed property, purity, intellect, and the sweet-smelling as its predestined virtues. Blackness became a void—landless, immoral, superstitious, and stank, destined for hard labor and damnation.” To this day, the world’s poorest people are constantly exposed to toxic chemicals in human waste and in contaminated land and water and to the noxious aromas in the environment around them. “Even after the day’s work is done, sweeping and cleaning, the nightmare, the sensorium of labor, is inescapable.”

Today, modern perfuming practices and the obsession with “clean” scents codify many of these divisions between the pure and the polluted. “What does it mean to be clean?” Tanaïs asks. “Does it acknowledge that someone, somewhere is getting dirty harvesting the roses, the sugarcane, the turmeric?”

Compounds like indole, the rotting and dirty underside of floral scents as well as of the bodily fluids that accompany sex and desire, are extricated and sanitized in much of the perfume produced today. The dark, but essential, sides of the story are left untold. These are the aspects that Tanaïs surfaces: the colonial project and forces of capitalism that exploit labor to drive down the costs of raw materials, crippling local economies, or the environmental devastation committed in the name of colonial profit—for example, the Dutch, who destroyed nutmeg trees in Indonesia during the 19th century to create scarcity and keep prices up.

If scents are invisible but imbued with meaning, the concept of the border itself takes on a similar quality for Tanaïs. In the chapters of In Sensorium devoted to the founding of modern-day Bangladesh and the Pakistani genocide that led up to the nation’s conception in 1971, Tanaïs unites both memoir and history to challenge the obstinacy of borders, especially as they pertain to trauma. Rather than tell the national narrative of winning independence against oppressive odds—itself largely left untold outside of Bangladesh, if not actively erased in Pakistan or co-opted into a story of national victory in India—Tanaïs bears witness to the atrocities they’ve inherited, while seeking to elevate voices that complicate monolithic and identitarian histories. These chapters—an exploration of Tanaïs’s inherited past, interwoven with stories of the women in their life and their own sexual exploration, trauma, and healing—journey through pain while preserving the potential for joy.

“Between the paramilitary groups aiding the Pakistani army and the Bangladesh Armed Forces fighting for liberation, women, children, the elderly, the disabled, queer and hijra femmes from all faiths and ethnic backgrounds were annihilated in the name of Nation,” they write. “Nation made it so we attach ourselves to a race, identity, or a people, at the cost of losing our interdependence with nature, our humanity, and ourselves.”

Tanaïs writes into these silences in history, for example by telling stories of the birangona: women rape survivors from the 1971 war whose suffering was named and mythologized into a national symbol, but who lacked reparations, mental health care, job opportunities, or protection from violence, and who were subject to the same toxic ideas around sexual honor that haunted their near homonym, the barangona—the prostitute.

The historical record concerning the birangona is sparse. Unlike the memorialized histories of generals, political actors, and nations, the records of these women’s experiences—the rehabilitation intake forms, counselor notes, hospital evaluations—have been destroyed, lost to fires, or have faded away in boxes. (They were mostly written in pencil.) Just like scent, these memories are impermanent, fleeting.

In a material sense, scent is elusive, but on an emotional level it can be deeply powerful. In Bangladesh, Tanaïs writes, simple, familiar things from the time before the war—the taste of guava or hot rice, the scents of monsoon rain or fried eggs—could become triggers for survivors. “Scents pulled them back to that moment they were knocked unconscious and awakened to the liquored breath of a man they’d known as a kind neighbor.”

But that power could be used for healing and transformation as well. Tanaïs shares the story of Maleka Khan, an activist and author, who found women who had been abducted and taken to Pakistani military cantonments. She wrapped them in pieces of saris, which, worn soft by the oils of a woman’s sweat and skin, offered relief and comfort, returning them to femininity and modesty. While scents can trigger, they can also offer refuge.

It is through perfume that Tanaïs enters that space to initiate healing. “Perfume,” they write, “a body language, reconstructs silence into sensuous experience, a new memory of pleasure that had been stripped away. Perfume floods the prisoner of war, the enslaved, the victim in the reviving spirits of pleasure.”

Source: The Hidden Politics of Smell | The Nation