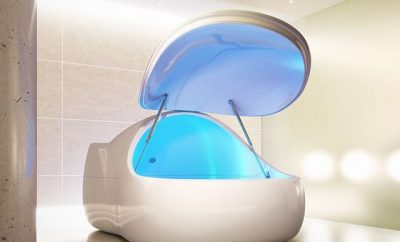 Sensory deprivation tank, also known as isolation tanks or float tanks, provide a unique experience involving relaxation, detoxification, and therapeutic benefits. First designed in 1954, isolation tanks were used to study the origins of consciousness by cutting off all external stimuli.

However, by the ’70s, research began to explore the health benefits they provided. Nowadays, float tanks have become commercialized as an increasingly popular form of therapy. During a float, the tank is filled with Epsom salt and heated to skin temperature, making it easy for you to remain buoyant. Once you’ve entered the tank, you’re completely cut off from the rest of the world, prompting your mind and body to enter into a deeply relaxed state. Sounds pretty cool, huh? Let’s dive into the health benefits these unique tanks can offer.

IMPROVED CLARITY IN THINKING AND FOCUS

Evidence shows that participants experienced improved concentration, focus, and clarity of thinking. All of this has been linked to improved learning, memory, and enhanced cognitive performance.

Several studieshave confirmed that sensory deprivation tanks have a therapeutic effect on chronic pain. It has been shown to be effective in treating chronic headaches, muscle tension, and joint pain. There is also a considerable amount of anecdotal reports confirming chronic pain is relieved during time spent in a float tank.

One of the most pronounced effects of being in a sensory deprivation tank is the profound feeling of overwhelming happiness, euphoria, and sense of well-being. Others have reporteddeeper spiritual experiences, including deep inner peace.

Sensory deprivation tanks have well-researched evidence pointing towards an increased performance in athletes after doing a float after strenuous activity. One study shows athletes experienced faster recovery and a reduction in blood lactate after using these tanks. Another studyof 60 elite athletes showed a profound effect on psychological recovery after hard training.

While floating in a sensory deprivation tank, your cardiovascular system has a chance to regulate itself thanks to the state of deep relaxation you can reach. Floating has been linkedto reduced blood pressure, better sleep, and reduced anxiety.

If you want to try out a sensory deprivation tank for yourself, check out these top providers around San Diego. Happy floating!