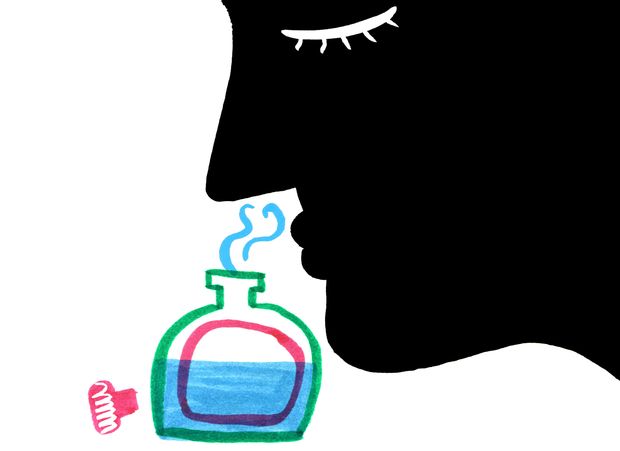 The art of scent: Chandler Burr on the most unheralded of artistic mediums | The Globe & Mail

Chandler Burr is a journalist, author, and curator. He is the New York Times’s former perfume critic, author of the books The Emperor of Scent and The Perfect Scent, and founder of the world’s first department of olfactory art, at the Museum of Arts and Design in New York.

I would argue that “Drakkar Noir” is the greatest single work of Industrialist art ever created in any medium. The artist’s name is Pierre Wargnye. You don’t yet know Mr. Wargnye, you don’t associate his name with his works as you do with the names Glass, Hockney, Serra, Piano. My job is to change that.

For the last several years, I’ve been working on a project, creating and building the Dubai Museum of Scent Art and Design. It is a museum that will be based on a fascinating, disruptive idea: We are, right now, on the event horizon of understanding that scent – used for 3,000 years to create dreamscapes, political statements, aesthetic hand grenades and expressions of beauty – art – constitutes a major art medium every bit the equal of paint, clay, audible tones and pixels.

My own relationship with scent began in early January, 1998, in the Gare du Nord station in Paris. I’m a journalist, and I was on my way to London to research a piece on then-British prime minister Tony Blair. As I waited for the Eurostar, I began talking to a biophysicist, Luca Turin, who was researching the human sense of smell; I wound up writing a book about him, The Emperor of Scent. My agent sent it to David Remnick at The New Yorker; Mr. Remnick assigned me to go behind-the-scenes at Hermes to follow the creation of a perfume, “Un Jardin sur le Nil.” My article for the magazine became, eventually, another book – The Perfect Scent – and led, immediately, to a meeting at The New York Times, which asked me to write about perfume for the newspaper.

By this time, I was wondering what the hell was happening with my life. I was a specialist in Asia and economic trade theory, and I’d invested years in my career. But I also love art and art history, and I told the Times I’d do it as long as they made me an art critic – my medium would not be painting, or music, or theatre, but scent. They said yes, and I began writing the Times’s Scent Notes column.

It is as obvious as it is universally unknown that scent is as legitimate and important an art medium as celluloid. The more I learned and wrote about it, the more important it became to me. In 2010, after five years at the Times, I figured I’d take the next logical, or perhaps inevitable, step: I left the Times to found the Department of Olfactory Art at New York’s Museum of Arts and Design and curated its first exhibition, The Art of Scent 1889-2012.

Lately, I’ve been working on a vastly more important project: the funding and building of the Dubai Museum of Scent Art and Design.

The great works created in scent are, today, unrecognized masterpieces. Once DMSAAD has been established, this will change quickly, startlingly and globally.

So why is “Drakkar Noir” the greatest Industrialist work of art ever created?

As with all works in all art mediums done in the school, its origins are found in industrial mass manufacturing.

In the 1950s, home appliances exploded into postwar American life, and mass-market products such as laundry detergents, made with new synthetic surfactants, arrived to service them. But there was a problem. The new detergents smelled terrible. The solution arrived when Procter & Gamble chemists created C10H20O. They named the molecule dihydromyrcenol.

Dihydromyrcenol is what’s called a “true synthetic” – before it was created, it had never existed on the face of the planet. The molecule had several qualities. It was cheap to make, it was solid as a linebacker – not even the harsh surfactants could destroy it – and it clung to fabric. Its smell resembled nothing else we’d ever known. (We’ve never found two different kinds of molecules that have the same smell.) So Procter & Gamble showcased it when they created the scent of Tide laundry detergent to cover up the smell of the product.

Something happened then. This industrial scent quickly became ingrained in the consumer’s mind as the smell of clean. The smell of clean doesn’t exist; true cleanliness smells of nothing at all, and this smell meant the clothes were covered in C10H20O. But the idea that dihydromyrcenol = clean is not wrong. When clothes smelled of it, it was a virtual guarantee to people that their clothes were freshly washed. By the 1980s, more than half a billion people equated this scent with clean in the instinctive, unquestioning way they equated red with stop.

In 1982, Mr. Wargnye was commissioned to create a fine fragrance to be called Drakkar Noir. He made the work using this industrial molecule as its structural core; 10 per cent of the formula (a massive amount for any single material) was dihydromyrcenol. His work was met with derision inside the industry (which is predominately French). Industrial materials in fine fragrance was sacrilege. How dare he. Who, they asked Mr. Wargnye, wanted to smell like an industrial molecule? It was an abasement.

To any observer of 20th-century art, that hundreds of millions of people wanted to smell like an industrial molecule was no surprise. Mr. Wargnye was engaged in the same great 20th-century project of democratizing art that artists such as Marcel Duchamp, Roy Lichtenstein, Andy Warhol, Keith Haring and David Hockney were part of in other mediums. (Or of debasing it; the debate continues.) In fact, Takashi Murakami’s Superflat movement expressly holds that there is no High and Low art – that the distinction is fallacious. As for Industrialism, if there is any more perfect expression of this school than Mr. Wargnye’s, I would like to see, smell or hear it.

One of the exhibitions I’m developing for our future museum is The Invisible Logo: The Design of Commercial Product Identities from 1850 to Today. You are surrounded by specific olfactory logos for commercial products from detergents to cars. You interact with dozens of them every day. And it is virtually certain you’re completely unaware of them even as they hit you one after the next after the next. I’d say scent logos are every bit as powerful as visual logos – the Nike swoosh, the Mercedes three-point-star – but actually they’re more powerful; the sense of smell is the most ancient sense we have, the first one we evolved, still rooted after millions of years in our reptilian brain. It is only third among the senses in its power to convey information and abstract concepts (sight and hearing are many times more efficient for these purposes), but it is the most powerful at triggering instincts and emotions.

Like thousands of products, Tide detergent has two logos – two commercial designs in two different art mediums. One is visible, the other invisible. Tide’s visual logo is instantly recognizable. But Tide’s olfactory logo is much more powerful and commercially important than its visual logo. Give the detergent to 100 people in the Tide-logo box but without the Tide-logo scent, and 100 will likely have a reaction that ranges from slightly discomforted to categorically convinced that “the detergent didn’t clean my clothes” and “something is wrong with it.”

The museum will host visiting scent artists who will create new works, which visitors will experience evolving in real time as they interact with the artist. We’ll invite chefs from around the world to the restaurant to create scent dinners for patrons. Our gallery space will be filled with exhibitions ranging from classical Arab perfumes to the most avant-garde contemporary art work and designs. We will mount exhibitions of raw materials, linking us to the farmers and tribespeople around the world who plant, care for, harvest and sell them, from Laos (red ginger) to Rwanda (geranium leaf), from Brazil (rosewood) to Somalia (myrrh); these scent materials connect all of us – all races, cultures, languages and beliefs found across our fragile planet.

Plus, our gift shop will be perhaps the most extraordinary in any museum in the world. Where else will visitors be able to buy not reproductions of paintings and sculptures but the real works of art?