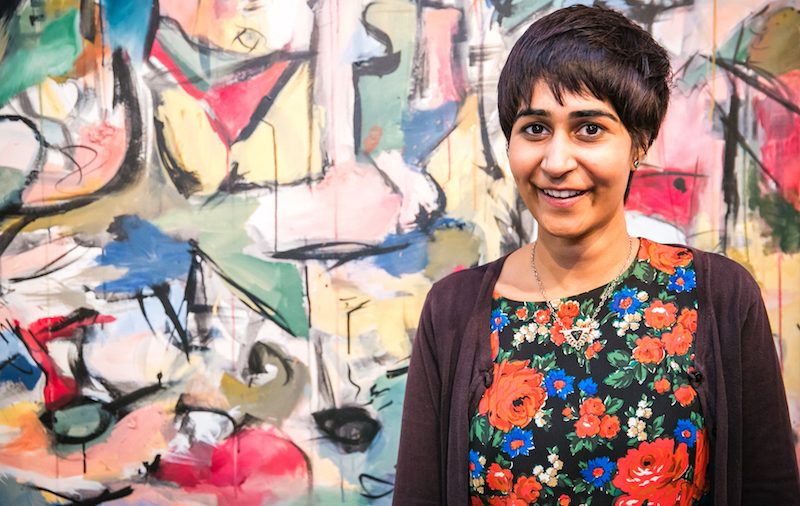 The art of masking: autistic women and their experiences of diagnosis | SW Londoner

“A lot of women are told they don’t look autistic, or don’t seem autistic.

“I don’t know what we’re supposed to look like, but it means women aren’t getting the support they need because they don’t appear to be as autistic as someone expects them to look.”

The words of Mahlia Amatina, who is an autistic abstract artist.

Her pieces celebrate neurodiversity, differences in the human brain, and she runs workshops using shape, line and form to describe how people feel.

The multi-award winning artist is far from the ‘Rain Man’ stereotype, as she’s warm, chatty, and often chuckles, causing her whole face to light up.

Her newest interactive exhibition, ‘Life on a Spectrum’, incorporates visual art, writing, videography and performance art, all influenced by how people across the world experience ‘sensory overload’, anxiety and emotional breakdowns.

When Mahlia was diagnosed five years ago, aged 31, she knew little about autism, except from what she’d read in books or seen in films and the media.

She said: “It really isn’t a very accurate representation, it’s always a guy, someone nerdy who’s into trains.”

Five years on, she has come to understand why holding down a corporate job was impossible, why it took nine attempts to pass her driving test, and why after attending Indian weddings as a child, it took her days to recover from the social and sensory overload.

She said: “I think back to issues that I may have had as a child, that could have been picked up on.

“Autistic women are often not diagnosed or misdiagnosed, and I feel like there’s much more to be understood about ethnic minorities as well.”

Whilst early research suggested there was a ratio of up to 16:1 autistic males to females, new studies indicate the numbers could be far more equal.

Dr Sarah Lister Brook, Clinical Director at the National Autistic Society, said: “It’s important to point out that every autistic person is different.

“But girls are often better at developing ways to ‘mask’ what we traditionally think of as the signs of autism, which mean that it’s harder to get a diagnosis of autism.”

Masking, she explained, means actively learning to behave like non-autistic people, so girls might copy the behaviour of their peers.

But this can be exhausting and lead to incredible levels of stress, meaning many women develop secondary problems such as anxiety, eating disorders or depression.

For 23-year-old Yangdzom Lama, years of ‘camouflaging’ her behaviours to adapt to social environments suddenly made sense after being diagnosed four years ago.

The west London artist explained: “I feel like I could put a name to my weirdness.

“Through understanding, it’s helped me change certain things that I don’t like, and work out how I might react to a difficult situation, which would then lead me to have a meltdown.”

Yangdzom is pensive and eloquent, a shock of blonde hair against a backdrop of intricate hanging tapestries.

Her abstract work largely features animal-headed humans and deities, influenced both by her close relationship with animals, and by her thangka painter father, who created traditional Tibetin buddhist art.

The Norwich graduate continued: “I definitely feel like it’s helped me grow up since the diagnosis, and understand more about my identity and who I am.”

By the time she was diagnosed at 30, Jess had ten-year-old twin sons, her mother Sarah having been diagnosed aged 40.

She said: “Looking back and reflecting is something I’ve done a lot since I was diagnosed.

“My mother was fantastic, and I don’t think my autism has hindered me in any way at being a good parent.

“But I think autistic women and girls are getting missed because the profile for autism is still very male, and these prejudices need to be shaken off.”

Clinical psychologist Trevor Powell, an abstract art enthusiast himself, said progress over the past 10 years means female presentations of autism are now starting to be recognised.

He explained: “Many women are relieved because it gives them an explanation for why their life has been difficult.

“There’s nothing wrong with them, their brains are just wired in a different way.”

Dr Lister Brook added: “A diagnosis can help explain that feeling of difference, which in itself can take away some of that stress, as well as allowing people to find the right support.”

Source: The art of masking: autistic women and their experiences of diagnosis