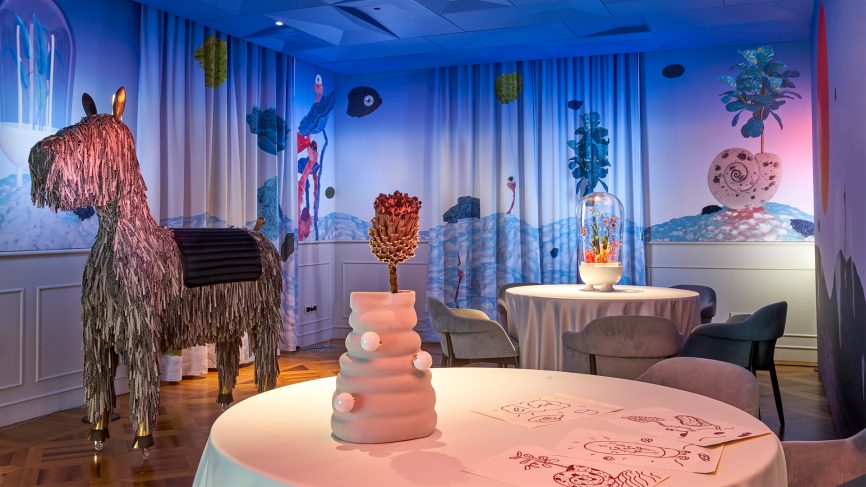 Unique multisensory dining experience: The ambience needs to pique the senses just as flavours fire up an appetite | Architectural digest

Designing a restaurant is a serious affair, especially in today’s time when what is on the menu alone is not enough. The ambience needs to pique the senses just as flavours fire up an appetite. “Space involves you from the first moment; it is another adventure, like a theatrical show,” explains acclaimed designer Matteo Cibic, who designed El Coq in Italy. Carnivorous plants that emit strange scents, hourglasses that play soft melodies, and a shapeshifting ambience—El Coq’s imaginative design choreography is as idiosyncratic as its unfamiliar ingredients. The restaurant can be best described as a multi-sensory journey established by the world’s youngest Michelin-star chef, Lorenzo Cogo. El Coq draws shock appeal by its radical expression and imaginative interior. All around the tiny space you can spot blown glass corpuscles, hairy carnivorous plants, metallic chrome plating, blackened rocks and gelatinous meteorites; while the lighting creates a surreal climate between the metaphysical and the dreamlike. The only question that pops into one’s head: “Is this even real?” Sound hourglasses mark the hours at each table. “The idea is to give customers an experience, not to keep them hostage. And since it is not right for others to decide what to do with our time, I thought of having diners choose the duration of the meal–from one to three hours,” Cogo reveals. The menu can be booked online, but only by food preference: meat, fish or vegetables. “In fact, I will decide the rest. I have an large pantry: Vicenza, Veneto, Italian and International cuisine,” teases Cogo. Certainly nothing trivial, given that the risotto with cod is accompanied by a reduction of pomegranate and salmon eggs and in combination with the ‘globetrotter crab’ there are Taggiasca olives, Pantelleriacapers, chilli and gazpacho sauce with almonds. The avant-garde eatery is opposite the Italian Renaissance architect Andrea Palladio’s celebrated 1546 masterpiece Basilica Palladiana in the central square of Vicenza. The 200-square-metre dining room hosts four tables on the ground floor and five tables upstairs that offer a more personalised experience —the chef’s table overlooks the kitchen during the dining experience. The aesthetic is enhanced by mood lighting, sounds and prints on the walls, sculptures and quirky cabinets. Kolkata furniture label Scarlet Splendour’s ‘A Trip to the Moon’ was one of Cibic’s choices to deck up the idiosyncratic space. The chest of drawers’ cylindrical body has push-to-open drawers and a surreal nose on top. “The motifs on the walls are printed on silk, custom-made for this project. The sculptures are bespoke—we placed the furniture from Scarlet Splendour with wheels on them so that they can be shifted around and change the look and feel of the place as and when desired. This would create a new experience for the diners every time they visit,” says Cibic. “Sculptures and small libraries are from my Dermapoliesis collection: prototypes of plants of the future, each of them emit a strange perfume or smell. Lights and sounds change slightly during the evening, every course has a peculiarity, and the space might change accordingly. On each table, there is an audio hourglass—it produces sounds and soft melodies during the evening,” continues the designer. It even signals patrons that their time slot has ended and the party’s over. Despite Cibic’s tech-driven approach to designing the Vicenza restaurant, creating a landscape inside a relatively small space was a challenge. Proportion and scales of the objects had to be considered as a scenography with multiple points of view. “Some plants printed on the far walls are 3-metre wide, the one closer to the tables is 50 cm,” Cibic elaborates. “Managing the illumination in order to see the dishes on the table without compromising on the mood lighting as well as the face of the guests and to safely navigate through the environment while still maintaining a dreamy atmosphere was tricky,” he explains. Cibic envisioned El Coq from an anecdote in colonial history. “500 years ago, a young man from Vicenza joined Magellan in his trip around the world; they were the first to prove that the earth was not flat. Antonio Pigafetta wrote a book about his adventure, and I was inspired by his descriptions about the end of the world that eventually became known as the Magellan Canal. He describes weird smoke and fire, snow and shiny ice on the rocks, strange giant animals (that we now refer to as sea-lions), slimy and furry plants. I wanted to create a timeless sense of wonder inspired by what he saw,” Matteo narrates.

Source: Italy: This restaurant’s interiors transport you to a strangely magical space