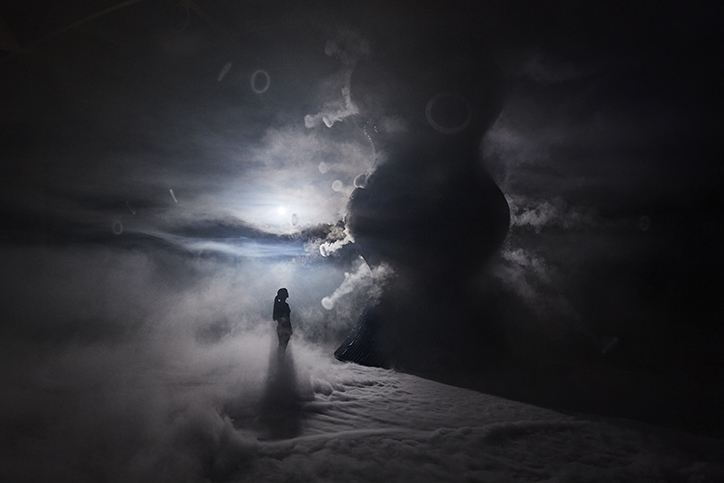 Studio Swine has built a reputation for its interdisciplinary practice that combines sculpture, cinema, poetry and research into an immersive experience for its viewers. Internationally renowned for its ability to build a rich narrative through multimedia, sensory experiences, the studio’s latest project ∞ Blue (Infinity Blue) takes us on a prehistoric journey of Earth’s molecular history. The experiential installation centres around one of the world’s smallest living beings, the cyanobacteria.

A three billion-year-old organism, cyanobacteria first developed oxygenic photosynthesis which forever changed the evolution of our planet, dictating the evolution of the living organisms that inhabit our world today (including ourselves). The sculpture that pays heed to cyanobacteria, is reimagined by Studio Swine as a nearly nine metre-tall sculpture. The 20-tonne object is a monument to bacteria’s creation which “continues to provide the oxygen in every breath we take.”

This is the most ambitious project Studio Swine has undertaken thus far, completing the project in under five months despite the monumental size of the sculpture. The project has produced the largest ceramic sculpture in the world and with the collaboration of the Paris perfume house Givaudan, the sculpture additionally emits fragrances imagining what the world smelled like during the primordial era. The co-founding artist Alexander Groves says the engrossing centrepiece absorbs the viewer into “the interconnectedness of geology, weather and life on earth.” He explains how “we wanted to make an immersive environment people could experience with all their senses. The installation is about the earliest forms of life that used the sun’s energy to create oxygen three billion years ago.”

The work taps into the power of scent that instils a primal instinct “that bypasses language and evokes feelings and memories”. ∞ Blue (Infinity Blue) represents an archetypal experience of the most fundamental kind, our very existence in itself. Exploiting “ephemeral materials” such as smell, Studio Swine enhances the experience of a young earth through the fleeting fragility of scent which “gives the artwork a spirit and a sense of life.”

∞ Blue (Infinity Blue) was commissioned as a centrepiece for the Eden Project and Future Pace. Alexander adds: “The scientists at Eden advised us on what the atmosphere was like on Earth at various periods, for example, four billion years ago the earth was a hot molten surface and the atmosphere would have had metallic smells from the gases in the atmosphere.” The multi-sensory experience creates a sense “awe and wonder”, delving into “the sublime invisible systems” of the work that specifically makes “our planet so special for life to thrive on.”