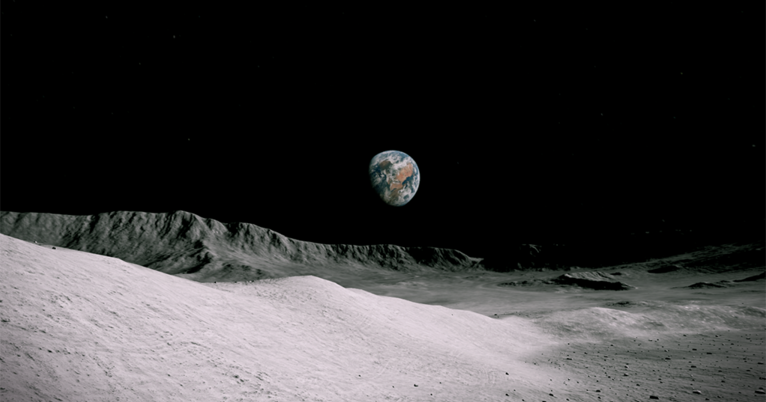 Strolling on the lunar surface — with some help from a Yale professor | News.Yale.Edu

Priyamvada Natarajan has perfected her moonwalk.

After years of envisioning the inner workings of quasars and mapping out the likelihood of dark matter, Natarajan has cast her attention to the idea of what it would be like to walk on the moon. The result is “Lunatick,” a virtual reality (VR) experience curated by Natarajan, the eminent British sculptor Sir Antony Gormley, and the company Acute Art. It’s set to premiere April 4 at the London art gallery The Store X.

“Virtual reality permits us to share more broadly the magic and majesty of our universe in a more intimate, experiential way — a space ride like none other,” said Natarajan, a professor of astronomy and physics at Yale. “What thrills me most about ‘Lunatick’ is how the combination of data, imagination, and the latest technology can succeed in powerfully conveying how we as a species occupy this paradoxical place in the universe. We are simultaneously significant and insignificant.”

Natarajan and Gormley — a visual artist and recipient of the Turner Prize in 1994 whose work includes many pieces in the collection at the Yale Center for British Art — have been friends for more than a decade, since Natarajan’s days as a research fellow at Trinity College in Cambridge. She recalled that Gormley was always something of a “space nut,” often quizzing her on how astrophysicists are able to visualize and map space using only light rays to make invisible realms visible.

Gormley’s art often focuses on the relationship of the human body to nature and space; Natarajan’s research routinely illuminates objects within the cosmos — from massive black holes to the dark energy that swirls around space.

“When Antony suggested that we use VR to explore and experiment with the sensory experience of gravity and space, I was enthusiastic to help,” she said. “Collaborating with Acute Art, we decided that in ‘Lunatick’ we would start from terra firma, escape the gravity of Earth, land on the moon, and walk on its surface, offering an immersive, multi-sensorial adventure.”

Natarajan was aware that many unmanned space missions have provided comprehensive, high-resolution maps of the lunar surface. She suggested that the best data set for “Lunatick’s” purposes would be the publicly available comprehensive mapping from NASA’s Lunar Reconnaissance Orbiter. She also lent her physics expertise in making sure that the haptic experience of space captured in the VR experience accurately depicted the “bounce” of walking on the moon’s lower gravity.

Rodrigo Marques at Acute Art rendered the data for the exhibit by modeling and recreating elements to scale, everything from Earth flowers to moon craters to the Sun. One of their motivations, Natarajan said, is to pay homage to the 50th anniversary of the moon landing.

Every time I was test-running [“Lunatick”], I had a rush of adrenaline. It’s very, very powerful.

“This virtual journey into space and strolling up and down craters is incredibly thrilling as well as disorienting,” said Natarajan with a chuckle. “Every time I was test-running it, I had a rush of adrenaline. It’s very, very powerful.”

It also proved nostalgic for Natarajan, in one sense. As a child, she’d poured over photos of the 1969 moon landing while reading the 1901 H.G. Wells novel, “The First Men on the Moon.” She was particularly fascinated by the idea of “cavorite,” a fictional material from the novel that defied gravity.

“As it turns out, much of my scientific research currently centers around gravity,” she said. “Mapping the distribution of dark matter via its gravitational effects, such as the bending of light; understanding how black holes, the objects with the most intense gravitational grip, form and evolve in the universe; probing the nature of the recently discovered dark energy, the mysterious force that appears to countervail gravity on cosmic scales — the real cavorite.”

Natarajan will be in London to attend the launch of “Lunatick,” and she hopes to bring the exhibit to the United States. She also noted that “Lunatick” is the kind of cross-disciplinary intellectual adventure that Yale’s Franke Program in Science and the Humanities hopes to catalyze on campus. Serving as the current director of the program, she has been encouraging and supporting interdisciplinary research projects by undergraduates and graduate students at Yale with a small grants program.

“These are all exciting adventures that bridge disparate disciplines and offer new avenues for creative and imaginative leaps,” she said.

Source: Strolling on the lunar surface — with some help from a Yale professor