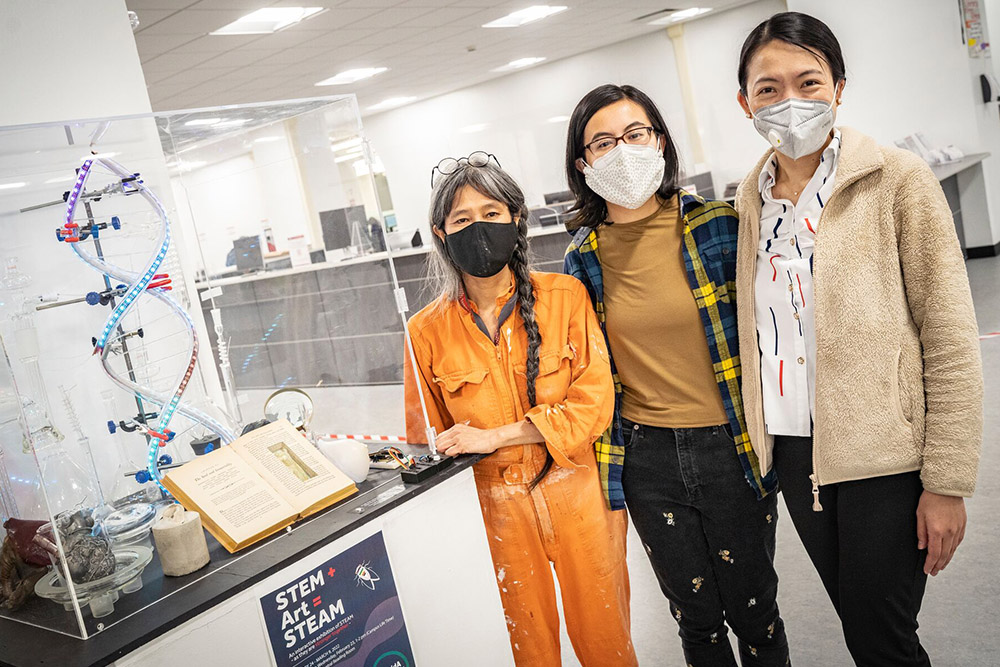 “We’ve been brought up to think that art is on one side and science is on the other,” said Jon Longtin, interim dean of Stony Brook University’s College of Engineering and Applied Sciences. “But that couldn’t be further from the truth.”

Nicole Sampson, dean of the College of Arts and Sciences, described the intersection of art and science as a chance to “extend your imagination as far as you can,” and an important path to the future.

Ete Chan, assistant professor in the Department of Biomedical Engineering, and professor Nobuho Nagasawa of the Department of Art, are working to leverage the inherent synergy between art and science. The result of their efforts can be seen in an innovative collaborative exhibition called “STEM + Art = STEAM,” which is on view in the Central Reading Room of the Melville Library.

The installation features three biosignal-driven works that illustrate the influence our bodies have on technology, portrayed artistically. Longtin and Sampson provided their remarks at a special event on February 23, and the installation is on exhibit until March 9.

“I’ve been interested in collaboration from the beginning,” said Chan. “It’s why I teach at a research institute like Stony Brook.”

The seeds of the collaboration were planted when Luigia Than ‘22, an electrical engineering major, began working with Nagasawa in an effort to incorporate her interest in art into her engineering work. They were soon joined by another student, biology major Ryan Chen ’24. Through Chen, Nagasawa met Chan in Spring 2021, and they soon forged a partnership.

“Our goal is to provide mentorship to our students to not only carry out science projects, but also develop soft skills such as communication, teamwork and time management,” said Chan. “Students get practical experience that helps with their career development.”

“I thought having an exhibition in the library would bring a wider audience,” she said, and her collaboration with the students and Professor Chan began. Their goal was to add an art component to the STEM (Science, Technology, Engineering and Mathematics) education that Stony Brook is known for.

Nagasawa said that not having a science background hasn’t been an issue, and that she enjoys the different benefits each discipline brings to the other. “My art practice is transdisciplinary,” she said. “I have always been interested in the synergy between art and science.”

Chan also recognizes how a completely different perspective can help add value to her work.

“Professor Nagasawa uses a different side of her brain when she works on a project than I do,” she said. “So when we work together, we have the ‘whole’ brain, which is something we can’t do individually.”

The fruit of the collaboration can be seen in the “STEAM Cabinet of Curiosity,” an idea that sprang from a brainstorming session in Chan’s genetic engineering class. She mentioned a possible DNA showcase, and Nagasawa was inspired to create a design concept with electronics — Chan suggested expanding it to a 3D display with a double helix structure. The resulting interactive DNA model lights up according to how fast a viewer’s heart is beating.

“We took an intangible visual – a heartbeat – and we made it visible,” said Chan.

Than made the center sculpture and designed and assembled the electronics; computer engineering major Summer Wang ’24 programmed the lights to respond to the sensor.

“That’s the intersection of art and science, not only in the content of the exhibit, but also in the process of building it, where the art perspective and the science perspective influenced how the whole project turned out,” Than said.

The helix display followed in the footsteps of a similar project by Nagasawa, an interactive optical fiber attire called Bio-Lux, created in 2016. Bio-Lux is a smart textile that’s activated by a pianist’s bodily rhythms. Sensors on the performer’s body detect heartbeat, breath and movement to act as triggers between the music and the illuminated attire. For the library display, Nagasawa worked with biology major Sarah Szabo ’22 and made the Bio-Lux interact with brainwaves.

During the pandemic when classes were remote, Nagasawa wanted her students to consider the role of an artist in society and taught a special topic class called “Community Interactive Art: Socially Engaged Art in the Time of Social Distancing.” This evolved into a new course titled “Socially Engaged Art,” which was approved by the curriculum committee in 2021.

“The fundamental premise is that making art is a significant social act and that education of artists must include an awareness of their potential to connect with a broad audience,” she said. “We should consider how art can contribute to humanity in tangible ways.”

A device called CiCaidA (Continuous Individual Crisis Aid Alert System) illustrates this point. On display in the library, CiCaidA is a biomedical sensor bracelet designed to monitor patient vitals in real-time with telemetry capabilities to alert healthcare workers at a central monitoring station. The prototype was designed and developed by Than, Chen and electrical engineering major Cynthia Wu ’22.

“The device will be able to determine the general physiological stability of the wearer and send out alerts if vitals deviate from accepted thresholds,” said Nagasawa.

Both Chan and Nagasawa see long-term benefits of their collaboration.

“This is just a start for the two of us working together,” said Chan. “We just submitted a grant together to the National Science Foundation, which would further reinforce our impact to not just university students, but would also encourage students in middle school and high school to learn about STEAM. I feel like the impact could be very far-reaching if we can make science more engaging and approachable.”

“Critical questions posed by artists today include not only self-expression and craftsmanship, but also questions of gender, identity, community, values, politics and meaning,” added Nagasawa. “An artist’s role is to facilitate change. What can we do to change humanity? As an art professor, I promote collaboration not only with professors like Dr. Chan in biomedical engineering, but also people in computer science, electrical engineering, music and others.”