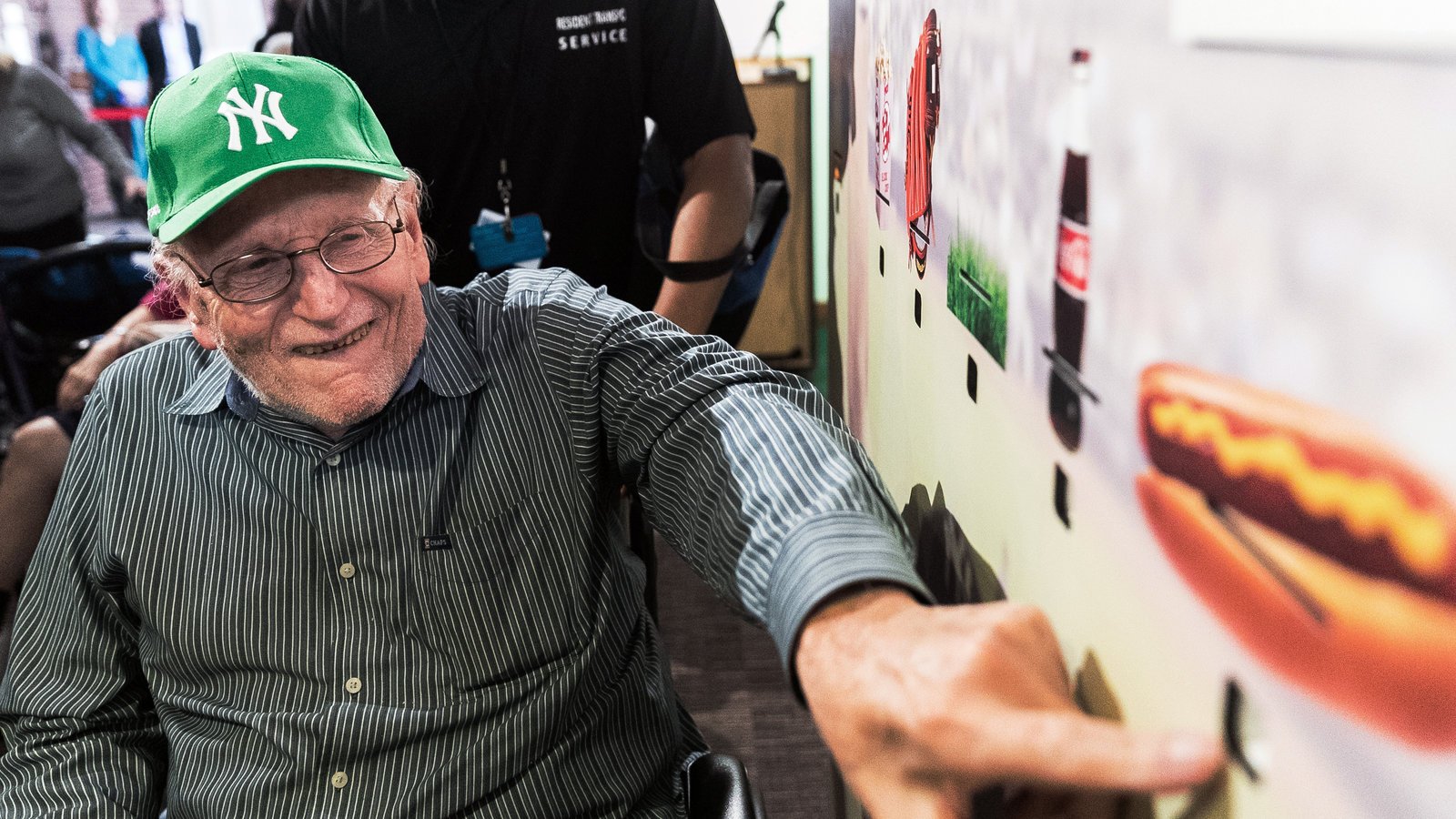 Stadium Scents Take Fans Out to the Ballgame | NY Times

Rochelle Youner, who lives at the Hebrew Home at Riverdale, a nursing home in the Bronx, walked up to a kiosk in a common area of the home’s first floor and pressed a button below a small icon depicting a baseball glove.

“That’s the real stuff — that’s a mitt, all right,” Ms. Youner, 80, said, smelling the leathery fragrance emitted from the kiosk, which attempts to bring the ballpark, or at least the smell of it, to the residents.

Many of the Hebrew Home’s residents were born and raised in the Bronx and are lifelong fans of the Yankees, with memories of visiting Yankee Stadium stretching back to the eras of Mantle and DiMaggio, and even earlier to Gehrig and Ruth.

But many of these older fans also suffer age-related memory loss. So the home, which often finds seasonal pegs for its reminiscence therapy programs, has timed its latest program to opening day at Yankee Stadium on Monday by erecting the kiosk with the therapeutic goal of recreating the distinctive smell of the ballpark.

“Too bad we can’t be there in person,” Ms. Youner said.

This is the point of the kiosk: to once again take these fans out to the ballgame.

For residents who followed the Dodgers, the scents recalled childhood days at Ebbets Field in Brooklyn, and for Giants baseball fans, they brought back afternoons at the Polo Grounds in Manhattan, in the days before both teams decamped for the West Coast.

It was recently installed in the permanent “Yankees Dugout” exhibition of team memorabilia at the nursing home, which includes seats, a turnstile and a locker from the old Yankee Stadium.

The olfactory exhibit, called “Scents of the Game,” is meant to evoke long-forgotten memories from the home’s 785 residents, many of whom have Alzheimer’s disease or dementia.

Many have difficulty with short-term memories but with some prompting can summon long-term ones, such as detailed recollections of childhood visits to ballparks decades ago, said Mary Farkas, director of therapeutic arts and enrichment programs at the Hebrew Home, where baseball has also been used in art therapy and poetry workshops.

Prompting these ballpark memories helps connect many residents with the joy they felt at the time and also helps stimulate their cognition, Mrs. Farkas said.

Dr. Mark W. Albers, a neurologist at Massachusetts General Hospital in Boston, who studies the effect of scent on patients with neurodegenerative disease, said the Hebrew Home’s memory exhibit touches on fairly new territory in sensory therapy in trying to resurrect positive recollections in a small population of patients who share certain common memories.

Source: In the Bronx, Stadium Scents Take Fans Out to the Ballgame