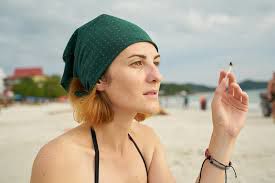 Smoking at the Jersey Shore is a thing of the past; my nose aches for the memories | Trentonian

This young lady would be breaking the law if she lit up a ciggie on virtually all New Jersey beaches this summer. (PHOTO: Pixababy)

Those three scents combined into what I’d imagine heaven itself smells like.

“You’re in Villa 12,” St. Peter will say to me as I waltz through the pearly gates. “Welcome. Please keep your cigarette lit at all times, even in the outdoor beach showers, where our heavenly water is actually dark tanning oil. Dinner is at 6. And here’s a pro tip: Leave Marilyn Monroe alone – she likes guys who play hard to get.”

Marilyn notwithstanding, that’s the smell.

It’s the smell, particularly, of Beach Haven, 1997, when myself and 93 of my closest friends rented a roughly 500-square foot section of a beach house. It was a few blocks off the beach, and my job at the time let us out at noon on Fridays. I’d beat everyone to the house, and I’d grab a beach chair, an Elmore Leonard novel, some Hawaiian Tropic, and my cigarettes. I’d head to the beach for a few hours of simple relaxation, waiting for my friends to arrive.

It was glorious. And the smell memory is as strong today as it was then. The ocean air, the dark tanning oil, the cigarettes. Mix ‘em all together, and to me, it’s legit intoxicating. I’m thinking about it right now, and my eyes are rolling around in my head.

Well, check that. I might smell it again, if my family and I decide to vacation at Wildwood Crest this summer. (Spoiler alert: We’re not.) But Wildwood Crest – the town of the endless walk from the street to the water, the town without beach fees(!) – is the only shore town (according to a Philly.com report) that will offer a smoking section on the beach in New Jersey. Every other beach? No more smoking, thanks to a law signed by Gov. Phil Murphy last year.

Now granted, many towns had already instituted their own beach smoking rules, but this state law trumps them all. Towns are allowed to designate up to 15% of their beaches to smoking sections, but the Crest is the only town to have done so.

Now listen: Smoking is horrible for you, and one of the dumber things you can do. This is obvious. If you smoke, you should stop.

We’re all adults here, and if smoking is your thing, I say go ahead and you be you.

Now I understand and applaud indoor smoking bans. I don’t want your smoke wafting under my nose when I’m eating dinner, or having a cocktail, or flying on a plane. (Yes, I’m old enough to remember seat 7A, smoking section, seat 8A, non-smoking section.)

But a cigarette (or cigar) on the beach, or, for that matter, most any other outdoor area? I have no problem with that, and these bans are taking things way too far.

Seriously: Is there another place more wide open than a beach? I suppose, in a perfect world, I wouldn’t want someone lighting up next to me on a crowded, ass-to-elbows beach situation, but on a normal day? Come on. Let’s all grow up. Smoke ’em if you got ’em. I promise I won’t tattle. (For the record, I’m infinitely more offended by the idiots who’d leave their cigarette butts in the sand. We should allow for smoking, but set up the firing squad for those ingrates.)

And as for – lest we forget the main point today – me and my memories?

Well, thanks to Murphy and my own late-blooming common sense, I won’t ever be privy to my favorite scent again.

One, because I don’t smoke anymore and I have no desire to light up.

Two, because I’m definitely a SPF30 kind of guy these days.

And three? I have a trio of children, combined age 23. The idea of having a few hours to read a book on the beach, uninterrupted, is about as likely a scenario as me bedding Marilyn Monroe, in heaven or otherwise.

So yeah, I’m going to have to get by on smell memory for the rest of my days. It’s a minor tragedy, to say the least.

Source: Smoking at the Jersey Shore is a thing of the past; my nose aches for the memories (JEFF EDELSTEIN COLUMN)