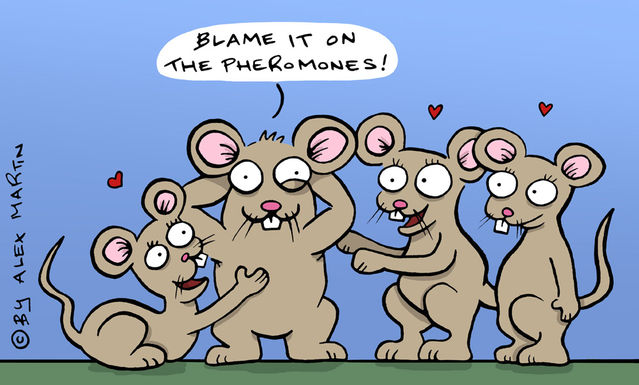 What is a pheromone?

Briefly stated, a pheromone is a chemical signal that evolved for communication between individuals within a species. Peter Karlson and Martin Lüscher coined the name—from the Greek roots pherein (to transport) and hormõn (to excite)—less than 60 years ago. Pheromones resemble hormones in some ways, but also show key differences. Whereas hormones are chemical messengers secreted by endocrine glands into an individual’s bloodstream for internal regulation, pheromones are agents discharged outside the body for communication between individuals. But pheromones do share with hormones crucial features in that that minute quantities are effective and operate in a lock-and-key fashion.

Reliable scientific evidence for pheromones was first reported for insects, which remain at the forefront. Sexual attractants of female butterflies and moths are particularly well known. A few molecules on a male antenna trigger a specific response: readiness to copulate. In silk moths, for instance, the female sex pheromone bombykol—the first pheromone to be isolated and synthesized—evokes wing fluttering in males.

Pheromones, being chemical signals, are typically detected by the sense of smell (olfaction). But mammals actually have two separate olfactory systems. Sensors for the main system reside in the nose cavity, where airborne odor molecules trigger receptors in sensory tissue lining bony scrolls. Beneath the main nasal cavity, however, most mammals have a pair of accessory structures—the vomeronasal organs (VNOs)—that detect fluid-borne molecules. VNOs are cigar-shaped hollow tubes with a sensory tissue lining, lying in cartilage gutters on either side of the partition between right and left halves of the nasal cavity.

Not all mammals have VNOs

By the 1970s, it became widely accepted that VNOs serve a special function in mammals for detecting species-specific pheromones. Pheromones are commonly present in mammalian urine, most notably as indicators of female reproductive condition.

Particularly good evidence for pheromones exists for certain rodents, especially mice. After substances acting as chemical messengers, notably between males and females, were identified, it proved possible to synthesize them for experimental tests. This, in turn, clearly revealed the special function of the VNOs and facilitated identification of neural pathways and focal brain regions. Both males and females responded to urine from either sex, even when greatly diluted. Perhaps the most striking finding with sexual behavior of mice is the part played by pheromones in triggering lordosis, a special female posture with the rump arched downwards. This signals readiness for mating.

Preliminary evidence for pheromones has also emerged with lower primates, notably through Martine Perret’s research on mouse lemurs. Both males and females mark their home ranges with urine bearing chemical cues. Dominant males have ranges overlapping those of several females and also perform urine-marking more frequently than subordinate males, whose ranges are peripheral. If a female is introduced to a group of males in captivity, both inter-male aggression and the frequency of scent-marking increase. Perret and colleagues eventually showed that female urine activates the VNO in male mouse lemurs—but the identity of the potential pheromone remains unknown, as is true for all other lower primates.

Comparable evidence for pheromones has been reported for New World monkeys.* In particular, David Abbott and colleagues reported a striking effect in common marmosets: The dominant, breeding female in a group partially or completely inhibits sexual cycles in her mature daughters or other subordinate females. If a female subordinate is removed from the group, her cycles are no longer inhibited—but exposing her to scent marks from the dominant female delays the release. It has been shown that the VNO mediates the apparent pheromonal effect.

Various investigators have claimed that pheromones also exist in humans. Indeed, four steroids have been specifically identified as human pheromones: androstenone, androstenol, androstadienone, and estratetraenol. However, the evidence remains controversial and it is unlikely that pheromones contribute significantly to the sexual behavior of any Old World higher primates (monkeys, apes, and humans). They all lack VNOs and accessory olfactory bulbs, and evolutionary loss following divergence from New World monkeys surely reflect a major decrease in the importance of pheromones.

In recent commentaries, Tristram Wyatt presents a very skeptical assessment of evidence for human pheromones. He emphasizes the need to apply the rigorous guidelines that successfully yielded results in research on other species: a clear demonstration of an odor-mediated response, identification and synthesis of the bioactive agent, and confirmation of pheromonal activity of the synthetic version with bioassays. Moreover, Wyatt has noted several common problems in research on potential human pheromones, including small sample sizes, overestimated effect sizes, lack of replication and positive publication bias.

Encouraging evidence does, however, indicate the activity of a human pheromone in a non-sexual context. In a study published in 2009, Sébastien Doucet and colleagues exposed 3-day-old babies to secretion from areolar glands surrounding the nipples of unrelated, unfamiliar lactating women. The secretion stimulates suckling by any baby, not just a mother’s own infant, and the babies’ responses seemingly developed independently of any experience with breasts or milk. If it eventually proves possible to isolate, identify and synthesize the active factor, this will be the first demonstration of a pheromone in a mammal without a VNO.

*Possible pheromones have been reported for Old World monkeys as well. Research by Richard Michael, Barry Keverne, and others indicating that a vaginal cue can influence behavior in male Rhesus macaques aroused particular interest. In a 1968 paper, Michael and Keverne reported experiments in which the sense of smell was suppressed in male macaques by inserting plugs into their nasal cavities. By repeatedly pressing a bar, males could gain access to ovary-less females treated with estrogen to restore their sexual activity. Bar-pressing frequencies increased markedly after removal of the nasal plugs, indicating some kind of olfactory cue. Subsequent experiments with vaginal lavages indicated that the active factor was a mixture of non-aromatic hydrocarbons. Michael and colleagues gave the name copulin to this inferred vaginal pheromone. However, subsequent research by David Goldfoot and colleagues failed to replicate their findings.

Herz, R.S. (2009) The truth about pheromones, part 1: How we communicate chemically. https://www.psychologytoday.com/us/blog/smell-life/200905/the-truth-about-pheromones-part-1

Herz, R.S. (2009) The truth about pheromones, part 2: Will a real human sex pheromone be found and bottled? https://www.psychologytoday.com/us/blog/smell-life/200906/the-truth-about-pheromones-part-2

Wyatt, T.D. (2015) The search for human pheromones: the lost decades and the necessity of returning to first principles. Proceedings of the Royal Society of London B 282:1-9.