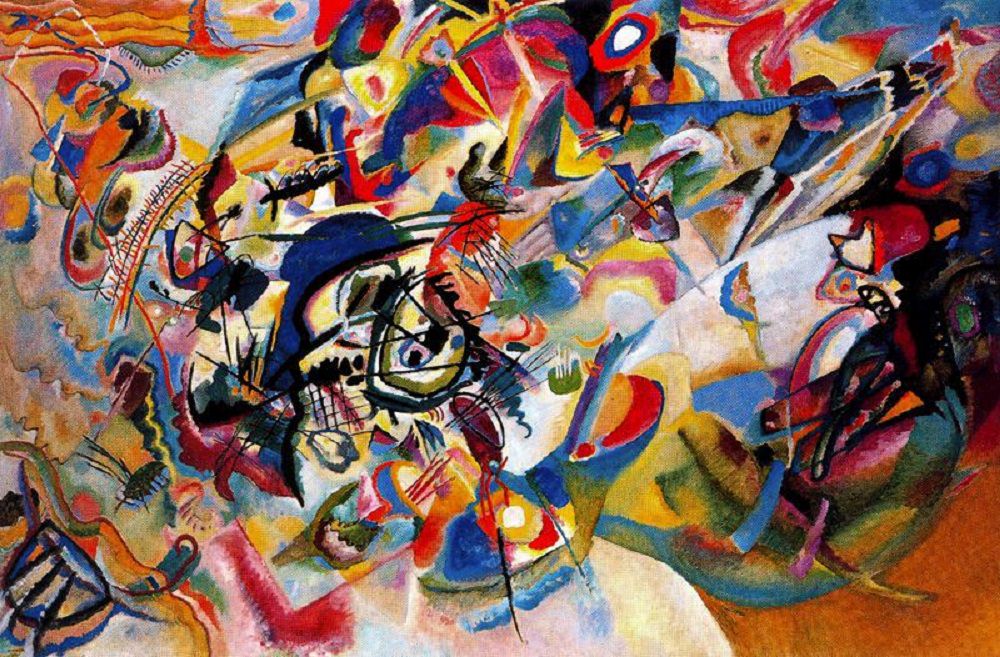 By msensory team28/08/2019No Comments
Can we understand the experience of synesthetes through art?

Besides being aesthetically satisfying, the scene is a vivid illustration of the phenomenon of synaesthesia. This is the neurological blending of the senses, when one sense is triggered involuntarily by stimuli to another. The experience is acknowledged as a scientific condition – yet for those who claim to experience it (which is about 4% of the population), it is hardly seen as a malady. On the contrary – over history, it has become inextricably linked with creative personalities. Benefit or not, however, it begs the question as to how an experience so individual – and subjective – can ever be conveyed.

“The confessions of a synesthete must sound tedious and pretentious to those who are protected from such leakings and drafts by more solid walls than mine are,” writes Nabokov, who recorded his childhood experience of synaesthesia in his impressionistic autobiography, Speak, Memory. He locates an enduring problem with the perception of synaesthetes: it is an inaccessible experience to those without any kind of ‘cross-modal perception’. Examples of communication breakdown range from Eddie Van Halen’s ‘brown sound’ perplexing the band, to Liszt’s direction of his orchestra to play “a little bluer, please, gentlemen!”. A passing conversation with a non-synaesthete today might end in dismissal of its existence for this reason. The condition is incommunicable, another thing to compound the difficulty of understanding artistic ‘genius’.

Apologetic as he seems here, Nabokov’s general view of synaesthesia matched romantic perceptions of the condition that dominated early synaesthetic art. We only need to look as far as Wassily Kandinsky, one of the most famous synaesthetes, whose paintings named ‘Composition(s)’, bridged sight and sound by showing how he visualised classical pieces as they were being played. His 1912 essay, On the Spiritual in Art, explores plainly the theory of colour, but in it he also likens the senses themselves to instruments. Kandinsky writes that, upon being ‘played’ or touched, they

“would imply an echo or reverberation, such as occurs sometimes in musical instruments which, without being touched, sound in harmony with some other instrument struck at the moment.”

Connections, if not intentional, are always tuneful. But an even more important point in Kandinsky’s thinking is that they were only a steppingstone to an artistic experience that would transcend sense entirely. What Kandinsky called the ‘spiritual vibration’ was the only thing that gave the first physical ‘impression’, the combining of the senses, any meaning. Kandinsky’s music-prompted paintings thus aimed to point towards an art beyond the capacity of sense, an idea rife in 18th century German philosophy. They aimed at something like Wagner’s Gesamtkunstwerk, a term which tellingly translates both as ‘synthesis of the arts’ and ‘ideal work of art’. For those without the synaesthetic abilities, though, this does not make the synaesthetic image any less esoteric.

Early synaesthetic music is similarly engulfed by mysticism. Olivier Messiaen’s own colour-to-music associations (and back again) invoked his Couleurs de la Cites Celeste (1963), an expansive piece inspired by the shimmering colours of the New Jerusalem in Revelations. Another is Scriabin, famous for his wild, orgiastic musical visions, who composed ‘Mysterium’ to accompany ‘the conclusion of the world’. Ideally delivered at the base of the Himalayas, it would involve a deafening climax of sound, smell, and light; and listening to even ten minutes of the unfinished work indicates what Scriabin was attempting: nearly unlistenable, artistic ecstasy. Innovation (Scriabin wanted to invent a piano of light, while Messiaen codified ‘colour-chords’ to write his music) and a certain dissonance characterise their art as the search for a divine, mystical whole.

This conception of colour synaesthesia is enticing, but it blurs the line dangerously with symbolism. Does Messiaen’s Couleurs build on the imagery of the Apocalypse, or the colours themselves as they appear to him? It is difficult for the listener to break down. Scriabin may not have even been a synaesthete at all; his mappings of colour-sound correspondences in 1911 may have just been metaphoric, in the way that we could associate happiness with the colour yellow, without necessarily ‘seeing’ it. Colour symbolism interferes with literary synaesthesia too: Rimbaud’s famous sonnet Voyelles is now also thought to have described the vowels in a synaesthetic way – such as ‘A’ made of a ‘black velvety jacket of brilliant flies’ – simply because together, they fit nicely in a rhyme scheme. He may not have had it either. How can the audience discern real synaesthesia from mere artistic effect?

Perhaps this is why contemporary synaesthetic art wants to show the experience of the senses eliding. There is no question that the popular conception of synaesthesia has been shaped by neuroscience: we know now that it is comprised of a series of involuntary responses, unplanned and unconnected (at least initially) to a ‘vision’. The transformation of media has also changed our notion of it. Mary Blair, the synaesthete behind much early animation, created memorable clips like Disney’s 1940 film, Fantasia, where Beethoven’s Symphony No.5 is played out to the movement of abstract shapes. In it, twisting geometric butterflies and clouds riven by light explode in time with each bar. It shows the viewer how a synaesthete might visually render the grandeur of Beethoven’s music – as it plays.

The same upheaval seems to be there even for those artists working with traditional forms. Jack Coulter, who had his lucky break last year in his 2018 collaboration with London Chamber Orchestra painting Mendelssohn’s Violin Concerto, also works in the junction between visual art and music. Despite his finished abstract expressionist pieces added to Instagram, he is loyal to sharing the spontaneity of his creative process. A caption to one discloses he was ‘personally overwhelmed’ making one painting, as well as an almost shrugging resignation to his sensory associations:

“I always trust those visuals, it honestly felt as if something was channelling,/I’ll never know the reason.”

Inexplicably, scrolling through his Instagram page will show that no matter the song of inspiration, his viewers connectwith Coulter’s interpretations beyond complimenting his striking use of colour. Comments like, “this is exactly how the song feels when I listen to it”, or even just that the painting “makes sense”, are surprisingly common. Taking inspiration from a wide scope of music, from Stormzy to the Rolling Stones, Coulter is likely to strike a chord in every listener. The experience of chromesthesia becomes more of a dialogue with the viewer, encouraging an implicit comparison of Coulter’s interpretation with even the most nascent impressions or associations of their own.

Focusing on process has also diversified understanding of synaesthesia. James Wannerton, the President of the UK Synaesthesia Society and an IT professional in his lay life, is an example of a lesser-known type, and one which illustrates the flexibility of the condition. He has lexical-gustatory synaesthesia, where hearing sounds causes him to taste. This he visualised in a tongue-in-cheek project with the London Underground, where each station’s name appears replaced by the food (or other substance) he tastes when he hears it. Speaking candidly in an interview on the Art Matters podcast, Wannerton disagrees that synaesthesia needs to trigger ‘beautiful’ sensations, to be fascinating. His own condition certainly does not, and maybe the sheer weirdness of his rechristening of Kilburn and Shoreditch as ‘Putrid meat’ and ‘Cabbage water’ respectively also confirms this. Like Coulter, he is at the mercy of his associating senses, but the process adds a pleasant quirkiness, and broadens how synaesthesia (and synaesthetic ‘art’) can be defined.

Synaesthesia is still relatively untapped in both scientific research and as an artistic reserve, and more work to relay the experience of synaesthesia has only added to its depth. A focus on the synaesthesia’s instantaneity further connects the viewer to artist: even if an audience cannot empathise, they can appreciate and comprehend it step-by-step. And besides – whether it is genuine blending of the senses, or just a gimmick engineered by Disney for emotional pull, the phenomenon is still a pleasure to watch – or to hear about.