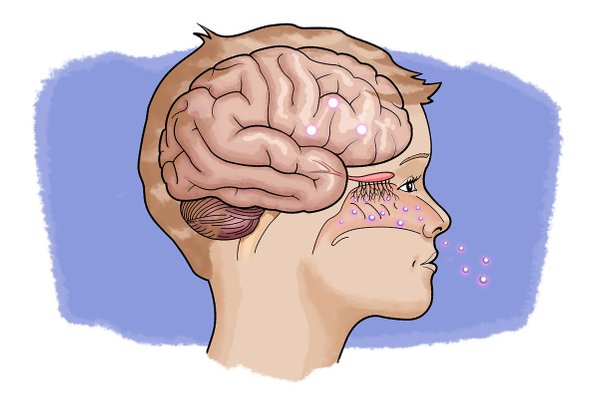 How well can you name that scent? Find out what the nose knows–with this odiferous activity!  Credit: George Retseck

Introduction
Did you know that approximately two million people in the U.S. have no sense of smell? Lack of smell is a disorder known as anosmia and can be caused by damage to the nerves that transmit information from your nose to your brain. Our sense of smell serves an important purpose. We use it to distinguish between edible and inedible items in our lives, including foods that are fresh or rotten. Even particular poisonous chemicals have strong, unpleasant smells. In this activity you will test the scent perception of your volunteers and learn about how smell is closely associated with memory.

Background
Your sense of smell is also known as olfaction. Olfaction takes place when molecules known as oderants bind to specific receptors in your nasal cavity inside your nose. When activated these receptors transmit information along sensory nerves to the olfactory bulb, a neural structure at the base of your brain that transmits smell information from your nose to deeper brain structures. Many of these deeper structures are involved in scent processing as well as in memory and emotion. As a result, our scent memories tend to be strongly linked with memories. Many of the areas that receive scent information are especially old in terms of brain evolution and existed before the areas that give us consciousness. It is often difficult to consciously identify and label a smell. Instead we often associate scents with the memories and emotions that they evoke.

In this activity you will be testing scent memories in your volunteers and learning about how we remember and recall scents!

Observations and results
In this activity you probably found that your volunteers had a much easier time identifying the smells when they had a reference list to use. In the first trial, when the volunteer tried to guess the smells without knowing the possible choices, they may have written down less descriptive guesses, such as “candy,” “cookies” or “candle.” When you gave them a list to use as a reference, however, your volunteer likely had a much easier time correctly identifying the scents in each bag.

Your olfactory system transmits information to brain areas of the limbic system associated with memory and emotion. As a result, we often have difficulty labeling scents by their name—instead we identify them by their associated memories. You might smell the scent of cinnamon and name it as “holidays” because it is common to associate the smell of cinnamon with that time of year.

Because scent memories are associative, and thus somewhat difficult to label correctly, your volunteer probably had fewer correct answers in the first column of their chart. Once you gave them the reference sheet, however, you provided more specific options. It was likely much easier for your volunteer to match the scent with the correct label than it was for them to identify the scents without a reference list.