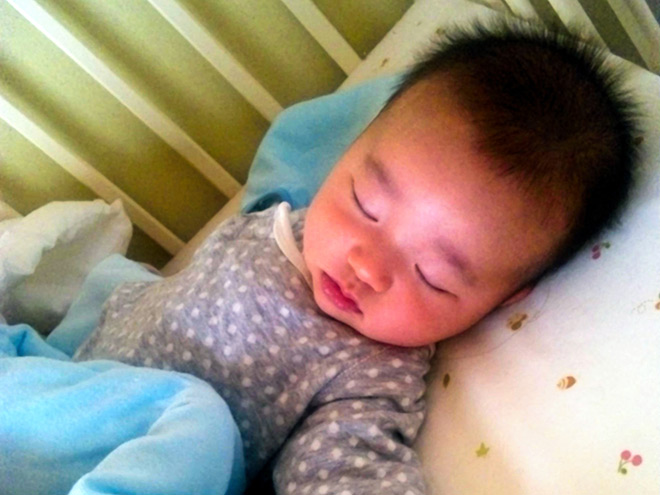 What does a baby’s head smell like? Researchers at Kobe University have pursued answering such a question. (Asahi Shimbun file photo)

KOBE–When Mamiko Ozaki had a baby, she was too busy to ever sniff her own child’s scent.

Then one day her colleague told her, “A baby’s head smells so good.”

“Touching a baby makes your heart melt, and maybe the scent of a baby has something to do with it,” she thought and started conducting research to test her hypothesis.

Today, Ozaki, 64, a professor of molecular physiology at Kobe University, is obsessed with the smell of a baby’s head.

Ozaki said she has recently deduced chemically what permeates the smell from the infant’s cephalic part and successfully recreated the scent.

In a classroom on the university’s campus in Kobe, Ozaki passed around paper strips soaked in a fragrance that resembled the smell of a baby to students.

Students sniffed the paper and rated characteristics of the scent, such as “good” “pungent” and “fruit-like,” on an 11-point scale.

Ozaki collected the scents of babies with the cooperation of the Hamamatsu University School of Medicine in Hamamatsu.

Without putting the babies under any stress, the researchers placed odor-absorbing beads on the babies’ heads and covered them with nets to secure the beads.

The research team also sampled amnion fluids, considering a possibility that the odor of the mother’s amnion fluid that protects a baby in her womb lingers on the baby’s head.

They found 37 components including aldehydes and fatty acids, but the components of amnion fluid turned out to be significantly different from those of the scent of the baby’s head.

Ozaki has long studied the pheromones of ants. She developed repellents for dangerous red fire ants.

It was the first time that Ozaki has conducted research on a human subject.

She now plans to find the answers to questions such as if the scent of a baby influences the mother’s emotional attachment, and if parents can identify their own child by sniffing them.

“I hope to use scents to prevent child neglect in the future,” Ozaki said cheerfully.