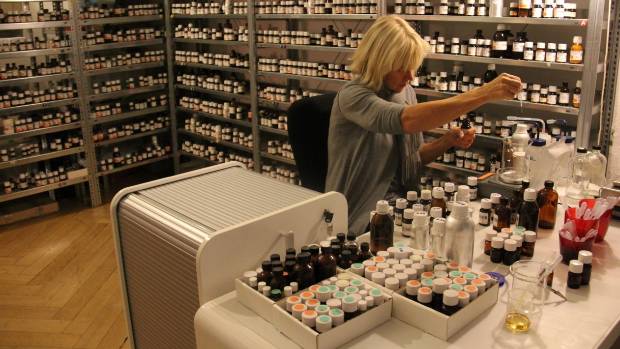 Scent expert made people sick when she recreated the smells of World War I battlefields, and has made a cheese from David Beckham’s used football boot | stuff.co.nz

Scent expert Sissel Tolaas once made people sick when she recreated the smells of World War I battlefields, and has made a cheese from David Beckham’s used football boot.

The Berlin-based scientist and artist sticks her nose in everything. Since the 1990s, she has recreated 7000 smells and about 3000 molecules which she stores in glass jars in her Berlin laboratory.

“That is a result of seven years of walking, travelling and smelling parts of the world,” says Tolaas, whose training is in chemistry, linguistics and visual arts.

The Norwegian-born scent expert took 32 hours to travel to New Zealand to speak at the Auckland design and art conference, Semi-Permanent. On the way here, she smelt the usual airplane smells – passengers near her, and the food served up.

But her view is that we don’t smell enough in our highly sanitised, visual, Instagram world. We should sniff more like our ancestors did.  Evolutionarily, human noses were used to find food, shelter, and partners. “The nose knows anything long before any other senses.”

“The hunter in the woods would die if he just looked at the woods, rather than having all his senses on the alert,” she says. “It’s a serious issue I worry about. We have this amazing software we can use and it’s free.  Everything is trying to replicate what we have already, so why don’t we use what we have and appreciate it?”

The 52-year-old works with architects, environmentalists, and commercial companies to create “smellscapes” of different cities, and so far has 35, including Berlin, London, Shanghai, Mexico City, and Kansas City, Missouri. She hopes to create a “smellscape” of Auckland while here. “I’ve sniffed some oysters so far.”

If it sounds whacky, there is good science behind what she does. She uses her own nose (and those of volunteers) to identify a smell and find the source of it. Then she brings a sample of the object back to her lab and extracts the odour molecules via a machine, making a synthetic replicate of the smell. Her lab is full of thousands of smells she has captured over the years, from smelly socks to fish and exotic flowers.

After Auckland, she will start a project with the National Gallery of Victoria to recreate the smells of Melbourne 50,000 years ago, when just Aboriginals were present.

Every morning, she trains in her smell archive, just as one might run or do a gym workout. Sniffing some of the smells she has created and collected, it’s a case of use it or lose it. “I find if I don’t do this work and I’m away for a while, my sense of smell is not as strong,” she says.

She advises us all to do the same. Putting on a blindfold, we should sniff for our partner, or our bed, or something in our home. “Start with children too. The earlier in life that they can use their nose the better.”

Fluent in nine languages with a string of degrees, Tolaas began her scent work in the early 1990s, using herself as a guinea pig. “I thought, “Can one understand the world using the nose, and could I make my nose my profession?”

She once recreated the smells of the battlefields of World War I for an exhibition in Dresden, Germany. Some visitors were sick as they walked through the door and were hit by a smell of what is most akin to mustard gas.

While working on a project for Adidas, Tolaas found a molecule in one of David Beckham’s football boots that was similar to a molecule found in cheese. She made up a wheel of Beckham Limburger cheese that was served to VIPs at the London Olympics.

When people meet her, they typically ask her – “What do I smell like?” And what is her favourite or worst smell.

She doesn’t have any smells she loves or hates, nor does she wear perfume or deodorant. “I never have. I find all smells interesting.”

But we all have a “smell ID”, just as we have a fingerprint. “Body smells are complex and they are caused by bacteria, or elements like diet, or where you live and what clothes you are wearing. Some of that is static and some of that is changing all the time.”

Fear has a smell, and in 2006, she mounted an art exhibition of the scents of men who were prone to severe anxiety attacks via scratch and sniff panels.

She says if we know what we are looking for, we can smell each other’s state of mind. The smell of something can evoke our first memory of it, triggering the emotional part of our brain, so that whenever we smell it, we are reminded of that moment, good or bad. “You take that smell with you everywhere till you die, even with those stories around it.”

Certain smells also alert us to danger – bad food, dangerous chemicals – but Tolaas says that it was only after a gas explosion in Texas in 1937 that gas was given a smell, and scientists added a smell code. Thanks to that, we know when we’ve left the gas hob on. “The nose knows anything long before any other senses.”

Crossing the boundaries of art, commerce and science, she is currently working with the fashion giant, H&M, to build up a smell archive, and also Adidas to develop a molecule for a shoe.​