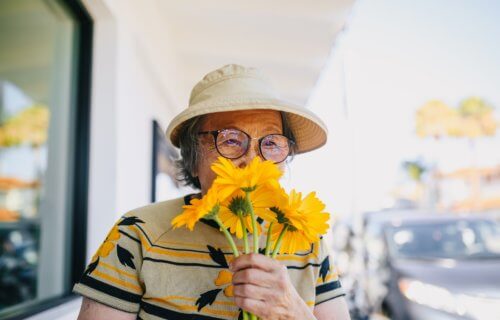 By msensory team03/06/2021No Comments
EAST LANSING, Mich. — Losing the sense of smell has become synonymous with COVID-19 infection over the past year. However, there are a number of other health issues which cause acute smell loss too, including Parkinson’s disease and even dementia. Now, researchers from Michigan State University find older adults with a particularly poor sense of smell may be at increased risk of developing pneumonia.

“About a quarter of adults 65 years or older have a poor sense of smell,” says Honglei Chen, a professor in the Department of Epidemiology and Biostatistics within MSU’s College of Human Medicine, in a university release. “Unlike vision or hearing impairment, this sensory deficit has been largely neglected; more than two-thirds of people with a poor sense of smell do not know they have it.”

For the first time ever, researchers established a possible link between smell deficiencies and higher odds of severe pneumonia. In all, study authors analyzed 13 years worth of health data encompassing 2,494 older adults (ages 71-82) living in either Pittsburgh or Memphis.

The nose knows when disease is present

The MSU team administered a Brief Smell Identification Test (B-SIT) to each participant. These tests included various common smells such as lemons or gasoline, which help to gauge a person’s sense of smell. After that, scientists monitored the group for the next 13 years to see how many developed pneumonia and required hospitalization.

That investigation led to a number of noteworthy findings. In comparison to those with a poor sense of smell, results show people with a strong nose were 50 percent less likely to need hospitalization for pneumonia. Participants with poor smelling skills who had never had pneumonia before were also 40 percent more likely to be diagnosed for the first time.

“To our knowledge, this study provides the first epidemiological evidence that poor olfaction (sense of smell) is associated with a long-term higher risk of pneumonia in older adults,” notes Yaqun Yuan, a postdoctoral fellow in Chen’s research group.

In conclusion, study authors say their work suggests olfactory issues or deficiencies may have a larger impact on overall health than modern medicine fully understands at this point.

“This is just an example how little we know about this common sensory deficit,” Chen concludes. “Either as a risk factor or as a marker, poor sense of smell in older adults may herald multiple chronic diseases beyond what we have known about. We need to think out of the box.”

The study appears in the journal Lancet Healthy Longevity.