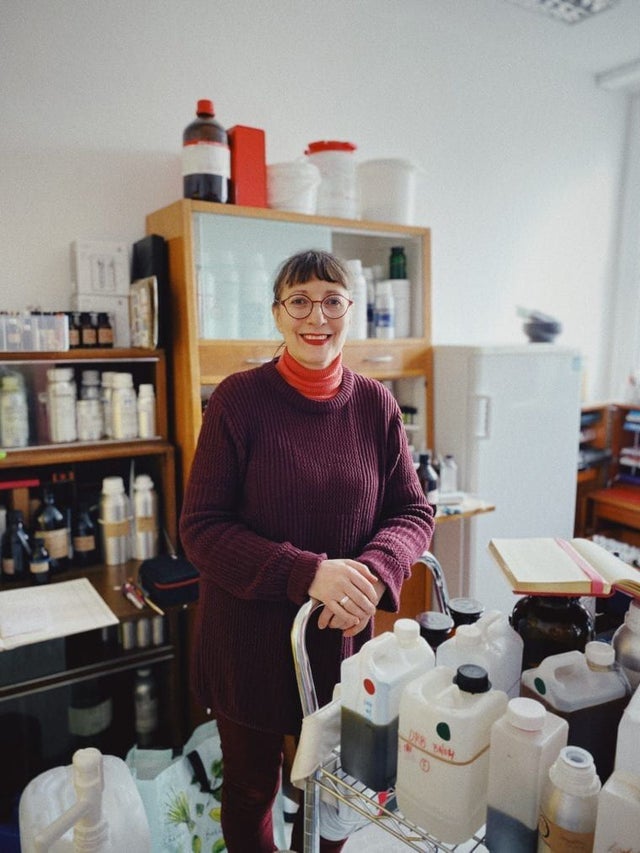 As a child, Sarah McCartney, now a maverick perfumer who can “hear” smells, carried out her first forays in scent-making, experimenting with water and flower petals in the garden of her childhood home in the Boldons in the north-east of England. The garden was part of the one played in by Alice Liddell, the original Alice in Wonderland, and visited by the author Lewis Carroll.

Those early experiments earned her mother a startling reputation. McCartney, now 60, recalls: “I went to school one morning and said I was making spells in the garden because I’m a witch and so is my mother. It was a Methodist school near Durham in the 60s; they weren’t very broadminded.”

While it was a creative childhood – McCartney sewed, knitted and played the clarinet and saxophone – her’s was far from the traditional route into perfume. She studied sciences at Durham University before moving into copywriting.

Working as head copywriter in the marketing department of cosmetics retailer Lush provided an unconventional training in distinguishing scents. “I had to smell a lot of things to be able to describe them,” says McCartney.

After 14 years with Lush, she wrote a novel, The Scent of Possibility, featuring a perfumer who made fragrances which comforted people going through hard times by reminding them of happier ones.

The Scent of Possibility

‘I prop up the perfumes by spending weekends teaching the workshops’ (Photo: Lucie Kerley)With nothing in the shops that resembled the fictional perfumes she had described, McCartney decided to learn how to make them herself, and was hooked.

Her unusual ability to hear smells as musical notes, a form of synesthesia, undoubtedly helped. “I find it easier to get the balance right because I can hear what will go together,” she explains.

Her creations drew the attention of perfume writer Lizzie Ostrom, and she found herself invited to make scents for the specialist fragrance shop Les Senteurs.

Learning how to comply with the strict regulations governing the fragrance industry left no time for writing, and McCartney realised she had become a perfumer rather than a novelist.

She named her niche perfumery 4160Tuesdays, because if we live to be 80, we will have 4160 Tuesdays – which McCartney thinks we should use to do something creative and fun. The company now has an annual turnover of £250,000 and devoted fans across the world, many of whom have dabbled at making their own scent at one of the perfume workshops she runs.

Although the business has been running for eight years Ms McCartney’s unusual career path still raises eyebrows among staid members of the fragrance industry. She is resigned, but bemused.

“Not having learnt what I could not do was an advantage, but I didn’t realise how many people’s noses I’d put out,” she says. “If you have not had three years at a perfume school, particularly a French school, and seven years beside a master perfumer, some say you have no right to call yourself a perfumer.

“That ignores the Middle Eastern perfumers and the Far Eastern perfume tradition. What I say is you can run a café without being a trained chef. That’s what I’m doing: running a café rather than a restaurant. It is funny to be thought of as the young upstart when you are 60.”

Ms McCartney deliberately tries to keep her costs down and to bottle scents in a variety of sizes catering for those on a budget. “I have a bit of an issue with things being really expensive,” she says. “I prop up the perfumes by spending weekends teaching the workshops.”

However, some of the fragrances are unavoidably expensive, as they use rare and hard-to-source materials. One recent creation, Clouds, costs £350 – but that didn’t deter one customer from splashing out on three bottles. “She wanted one bottle for each of her three houses,” recalls McCartney.

A Saudi princess once asked her to create a bespoke fragrance, which set her back £5,000 – casually handed over in cash in an envelope by the driver. “It was amazing,” says McCartney. “I carried it around in my back pocket for days just to feel that rich.

Not having learnt what I could not do was an advantage, but I didn’t realise how many people’s noses I’d put out (Photo: Lucie Kerley)

With the UK in lockdown, McCartney and her husband, Nick, are only going into her studio in Hammersmith, west London, once a week to keep the business ticking over. She is mostly working from home on scents, including a commission to produce the aroma of a room full of whisky barrels, and a crowdfunded perfume to recreate the smell of a church organ loft. Her latest project is Scenthusiasm, an online perfume school.

A recent fragrance, The Darkest Bloom, commissioned by the publishers of the fantasy novels Shadowscent: The Darkest Bloom and Shadowscent: Crown of Smoke by the writer PM Freestone, which feature a perfumer and healer, is awaiting its debut after lockdown put paid to plans for the second book’s press launch in March.

One of McCartney’s final acts before lockdown, in the days when panic buyers were clearing shelves and profiteers were gouging prices, was to make a batch of hand sanitiser and make it available to customers on her mailing list and Facebook group. She donated the final 50 bottles to local hospitals. It is something, she says, but, “I do feel guilty that I’m not someone useful, like a doctor.”