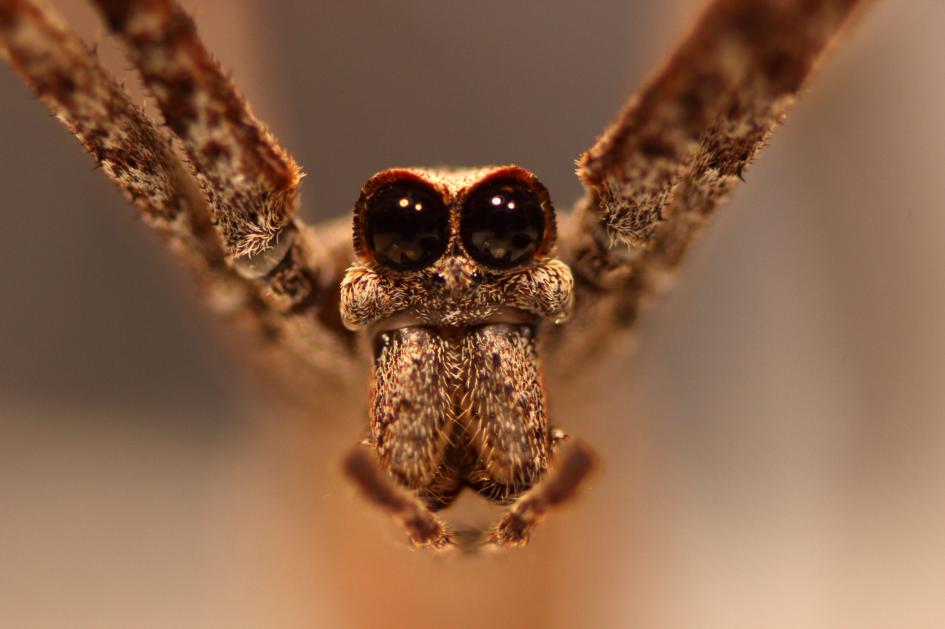 Ogre-faced spiders have eight eyes, but the two massive, forward-facing orbs are what give the arachnid its name. PHOTOGRAPH BY JAY STAFSTROM

These big-eyed arachnids use organs in their legs to hear a surprisingly diverse range of sounds, an ability not seen in other spiders.

BY LIZ LANGLEY
WHOEVER NAMED THE ogre-faced spider was clearly impressed with its gargantuan eyes, monster-like orbs that spot prey in the dark.

As it turns out, this nocturnal arachnid is notable for another sense entirely: Hearing. A new study says the spider can hear a surprising range of sounds from more than six feet away, thanks to sensory organs—on its legs.

Native to the U.S. Southeast, ogre-faced spiders hunt by dangling from vegetation and then flipping backward to capture airborne prey in a sticky net.

Curious about how the spiders can accomplish such a nimble feat, Jay Stafstrom, a postdoctoral researcher in neurobiology at Cornell University, previously ran an experiment in which he covered the spiders’ eyes with a piece of silicone. Intriguingly, the blindfolded predators could still catch flying insects, suggesting they were actually hearing their quarry.

Spiders don’t have ears, in the conventional sense. But increasing evidence shows that some spiders—such as jumping spiders, fishing spiders, and now ogre-faced spiders—can hear via nerve-based receptors on their legs. The receptors function like ears, picking up soundwaves and communicating the impulses to the brain. Spiders’ ability to feel the vibrations of prey tiptoeing on their webs is well known, but it’s not considered hearing. (Read how jumping spiders can see the moon.)

What’s so impressive about ogre-faced spiders is how well they can hear, says Stafstrom, whose study was published today in the journal Current Biology. Unlike some species (such as jumping spiders) that can’t hear high-frequency sounds, ogre-faced spiders can detect both the low-frequency sounds of insect wingbeats and the high-frequency chirps of birds, their main predators, Stafstrom found.

Discovering such advanced hearing in such a simple creature could help scientists learn more about how the sense evolved, says Sen Sivalinghem, a sensory biologist at the University of Toronto, who wasn’t involved in the study.

“Understanding how sensory information is processed in the brains of relatively less complex animals with fewer neurons—and how this affects the behaviors and decisions organisms make—will provide insights into processes and mechanisms of all brains,” he says. “Including ours.”

In their new laboratory experiment, Stafstrom and colleagues inserted tiny electrodes into spiders’ brains and also into disembodied legs, which can react to sounds up to an hour after being severed. The scientists suspected that the metatarsal organs, which are located near the end of each spider’s leg and are responsible for sensing vibrations, are also what they use to hear. (Learn how some spiders have brains in their legs.)

The scientists then played sounds of various pitches from a distance of about six feet. The electrode readings revealed that the spiders’ brains and metatarsal organs became active when exposed to low and high frequency sounds. When the scientists disabled the spiders’ metatarsal organs, the arachnids didn’t react to the sounds as strongly, suggesting the organs act like eardrums.

To confirm the laboratory findings, the team also tested spiders in their natural habitat of Gainesville, Florida, playing the same sounds at a six-foot distance at night.

The results were the same: The spiders cast their nets when they heard low frequencies, which mimicked insect wings, and stayed still when they heard high-frequency sounds, which would indicate a predator nearby. Those responses strengthened their finding that spiders were actually hearing and not just reacting to web vibrations, the study authors say.

“One of the really exciting aspects of this study is the combination of behavioral experiments with neurophysiology work,” says Sivalinghem. (See 10 beautiful photos that will make you love spiders.)

“It is notoriously difficult to record brain activity in spiders,” he adds, which means “we know very little about how sensory information is processed and what information is important for spiders. But studies like this one are filling the gap.”

The discovery could even lead to better technology for detecting sound, such as hypersensitive microphones, Stafstrom says.

Since ogre-faced spiders have “evolved to be really good at this really strange behavior,” he says, “we might be able to mimic that in some form.”

For instance, he envisions a spider-like microphone or smart speaker with eight “legs,” each with a sensor, so “you can get a really good calculation of where the sound is coming from, how fast it’s coming, and where it’s going to go.” Such a device could be useful for detecting a specific voice through lots of other verbal chatter, he says.

“We think there’s a goldmine of information hidden in these spiders.”