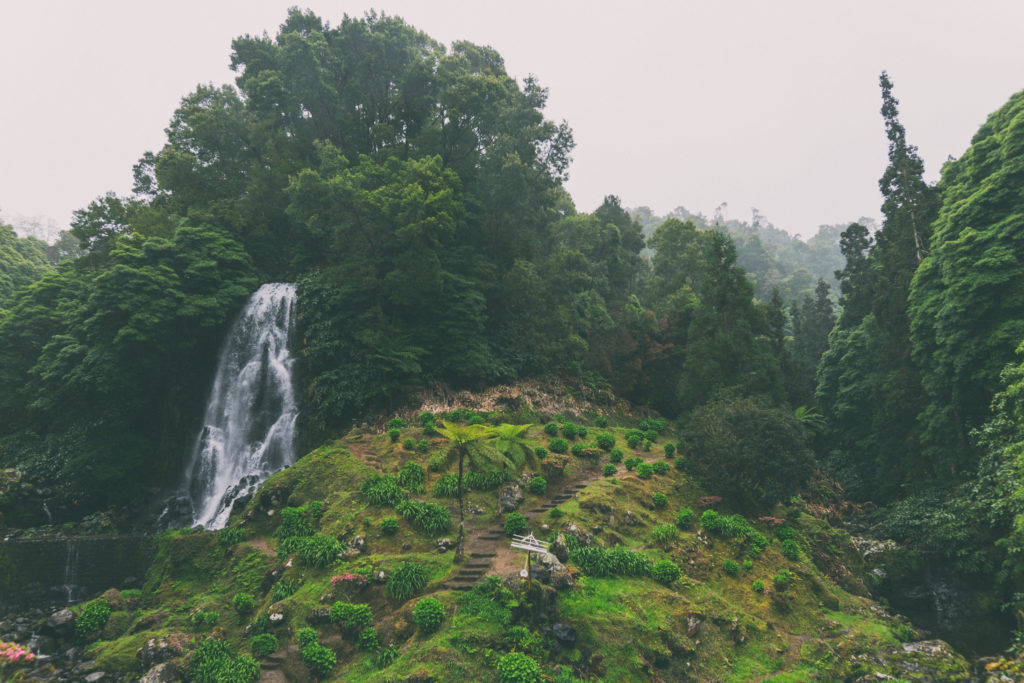 Tremor festival takes place every year on the Azorean island of São Miguel. Offering an immersive, multi-sensory experience with leftfield sounds and nature as its backdrop, this year’s performers included Lafawndah, Teto Preto, Lieven Martens and more. FACT’s April Clare Welsh headed to the island to experience the music, absorb the natural surroundings and talk to various artists about their adventures in field recording.

The strange and terrifying call of the cagarra seabird – an ordinary-looking shearwater species native to the Portuguese archipelagos of Berlengas, the Azores and Madeira – sounds a little like a gurgling demon or a dying frog. It’s one of those otherworldly noises from nature that makes you feel quite insignificant as a human being, and it’s the sound with which Lieven Martensclosed his set at this month’s Tremor festival on Açores – a chain of nine islands in the middle of the North Atlantic Ocean, almost a thousand miles west of mainland Portugal.

Back in 2011, the Antwerp-based experimental artist spent six months on Pico island in the Azores, a place known best for its eponymous volcano, Ponta do Pico. During his time on the island, Martens made various sound recordings and in 2012, while still operating as Dolphins into the Future, released these collages and compositions into the world in the form of A Star Maker, Strange Dreams & Clairvoyance and Canto Arquipélago, a sound poem about the biological diversity of the Azores. He recorded the latter “under a volcano on a portable four-track… in our temporary island home between the mango trees, the bush and the cliffs”.

In 2017, Martens released his Idylls album, which he based on the writings of Robert Louis Stevenson. FACT’s Miles Bowe described the LP as “lush and as ornate as ancient ruins” and when the organizers of experimental arts festival Tremor heard the record, they were moved to invite Martens to perform. Located on the volcanic archipelago’s largest island of São Miguel, Tremor is a multi-sensory adventure trail. Taking place from April 9 – 13 this year, the festival featured music performances and surprise concerts in unexpected nooks and crannies across the island, from waterfalls to cliff-edges, as well as theatres and club spaces. São Miguel is a big draw for nature lovers, and festival-goers were given the chance to interact with the island’s sublime volcanic landscape through workshops, talks, art, music and artistic residences.

The weather on the Azores is highly temperamental, and this year it rained for the majority of the festival. But that only added an extra layer of surprise. Martens’ second performance on the Saturday, which was originally intended for outdoors, cast a blissful spell over a hungover late afternoon crowd in the chandelier-encrusted environs of the Teatro Micaelense. Cushions were scattered across the floor and many attendees kept their eyes shut throughout Martens’ bizarro set of sonic curios. Weaving found sounds and field recordings – from birdsong to crashing waves – into his synthscapes, Martens tuned into the island’s wild natural frequencies, in spite of his performing inside a formal theater.

The concept for Martens’ Tremor performance was based around the fictitious story of a cow herder. Speaking to FACT at the festival, he explained how he used that idea “as a mirror to speak about the islands”. The spark of the idea came to him during his 2011 stay on Pico. He had spent some time island-hopping across the Azores by boat on an under 30s youth ticket and made it Corvo – the smallest of all the islands. “I was walking around the village and came across this cow herder,” he recalls. “There is this giant crater where the cows are taken to and the cow herder was just standing there humming a little bit. That night I saw him again at the bar in the same position with the same humming. For me it became really interesting to try and look at the island through his mind”.

“I liked the pastoral nature of it,” he continues. “But in an experimental way, of course. It was more descriptive than narrative, like how he would see the birds, serenading him”. Martens unfurled this sound piece as a double presentation, with the first program music-led performance taking place in the serenely-lit stone cave of Ribeira Grande’s Archipelago Contemporary Arts Center. Enlisting a group of clarinet players from a local music school, the set was tranquil, classical and immersive, with visuals featuring a painting by famous Flemish painter, Joos van Cleve. “At first we were doing nature shots, but we decided to show a piece of Antwerp instead”.

The sloped landscaped environs of the Natural Park of Ribeira dos Caldeirões was also used as a setting for live music. There, Portuguese wild-card David Bruno mixed Brainfeeder-style instrumentals with satirical songwriting that included a track called ‘McDrive’. Outside, festival-goers appeared attentive to the festival’s warnings to respect the surrounding natural environment.

Tremor rolled out its “Green Edition” this year, in a bid to reduce its ecological footprint, and the festival showed a committed to sustainability at every turn. “In the Azores, the importance of nature conservation is indisputable given the environmental, social, and economic significance it represents in the islands,” read a statement. “The preservation of habitats, species of flora and fauna, natural landscape, water quality and waste management are priority and crucial factors in maintaining the environmental quality that characterizes the archipelago…. For this reason, we ask you to have the utmost respect for the surrounding nature. So please use the public rubbish bins and recycle what can be recycled. Under no circumstances make nature your dustbin!”

A number of other artists at this year’s festival also sought to capture, evoke or synergise their practice with the natural environment. A 35-minute sound walk envisioned by UK avant-pop supernova Natalie Sharp, aka Lone Taxidermist, aligned festival-goers with São Miguel’s craggy coastline. Personal MP3 players pieced together noise with field recordings and clips of haunting dialogue and after walking along the narrow coastal path, with waves crashing fiercely against the cliffs below, the installation culminated in a musical performance on top of a cliff that had become aptly shrouded in mist.

“I’m in love with this island. This is my fourth year here in less than a year”, Natalie Sharp told FACT after her performance. Partly inspired by Hieronymous Bosch’s painting ‘The Garden of Earthly Delights’ the performance – which was in collaboration with musician Tida Bradshaw – melded choreography with a wealth of sounds, from nose flute and theremin to operatic vocals and abstract, out-of-this-world electronics rendered from synths and drum machines.

By Friday, the creeping Twin Peaks-y mist had completely enveloped the island, grounding flights in and out of São Miguel and lending a primordial air to the island, which is nicknamed the green island (Ilha Verde). Visitors sometimes half-jokingly liken São Miguel to the scenery from the Jurassic Parkmovies, on account of its forested valleys and verdant, fern-rich vegetation. A multi-sensory installation at the Brui Gallery in Ponta Delgada tapped into this character, capturing the origins and biodiversity of the island with an exhibition that featured stunning nature photography and sounds drawn from the island’s topography. Conceived by sound recordist Duarte Ferreira and photographer Renato Cruz Santos, the Sistole exhibition “reflected on the awakening of sights and sounds from the earth” to offer a multi-disciplinary experience.

The pair explained to FACT how they had ventured out to the crater lakes of Sete Cidade and stayed there for four hours without talking to each other, simply listening to the sounds of the earth around them. “We found a few places where we could sense the whole environment pulsating with different sounds”, says Ferreira, who used a hydrophone to capture watery depths. This aquatic soundscape was paired with a piece of volcanic rock and presented inside a near pitch-black space that brought the recipient as close as possible to the natural heartbeat of the island. “We wanted to make a complex multimedia installation which would offer the viewer a sight and sound experience without the concerts”, explained Ferreira.

Elsewhere at the festival, artists melded folk traditions with more contemporary sounds to draw influences from outside of nature. The lineup panned a diverse global spectrum, with Brazilian, Cape Verdean and Spanish artists playing alongside Portuguese and homegrown acts. Friday saw a performance from folk star Lula Pena, whose low-key spin on the Portuguese tradition of fado, which she calls “phado”, was presented in the jaw-dropping Living Museum of Franciscanism.

That night, the queue snaked all the way around the corner for recent FACT cover star Lafawndah, whose performance at the Black Box in the Archipelago Center for Contemporary Arts in Ribeira Grande took the Warp artist’s slow-burning devotional future-pop to new levels of intimacy, with the crowd sitting down on the floor for parts of her set. Live Brazilian electronic troupe Teto Preto upped the performance art stakes with their show-stopping set at Teatro Ribeiragrandense. Opening with their 2018 track ‘Safo’, band member and visual artist Laura Diaz wailing at the top of their lungs, the group’s intense mix of politics, contemporary dance and boundary-pushing electronics leading the crowd towards a ferocious point of no return.

The headline live act, Cape Verdean funaná trailblazers Bulimundo, kept the Coliseu Micaelense Saturday night crowd on their toes with a riotous celebration, while psychedelic Spanish duo ZA! totally lost their shit at the Old Garage Varela, one of the festival’s more industrial-looking venues. And as DJ Fitz powered up party sounds from the Latin diaspora – and beyond – accompanied by live guitar from Zéfyre, multi-venue arts space Arco 8 was transformed into a mass of flailing limbs and wide smiles. As one attendee told FACT during the set: “Tremor is amor”.

Beauty is an ecstasy; it is as simple as hunger. There is really nothing to be said about it. It is like the perfume of a rose: you can smell it and that is all.